Norm Mineta, former U.S. secretary of transportation and San Jose’s first Asian American mayor, is being laid to rest in his hometown.

Family, friends and colleagues shared warm memories, funny anecdotes of Mineta’s charismatic personality and powerful stories of his accomplishments and fortitude at a Thursday memorial at the San Jose Civic Center. Mineta died on May 3.

“Mineta spent a lifetime trying to be a builder, not a breaker. A Uniter, not a divider,” said Clinton, who appointed Mineta as secretary of commerce in his administration—the first American of Asian ancestry to join a presidential cabinet. “Somebody who used his power to empower others, not to get more power for himself at other people’s expense.”

“This is a special place that all kinds of people come from,” former president @BillClinton said in San Jose. “Norm Mineta basically embodied them all in different ways.” #welcomehomenorm @SJSpotlight pic.twitter.com/xPaQSCLxMP

Mineta is a local legend known for his advocacy during the September 11, 2001 attacks. As the secretary of transportation, he swiftly directed planes to fly into Canada, issued statements to several national airlines to avoid discriminating against Arabs and Muslims and was instrumental in creating the Transportation Security Agency. For that, Mineta San Jose International Airport was named in his honor the same year.

But the launchpad into his advocacy and public service started in San Jose, when he was appointed to the City Council in 1967. He shattered a glass ceiling then, and did so again in 1971 as the city’s first Asian American mayor elected—not only in San Jose, but in any major city in the country. Winning 62% of the vote for mayor, Mineta became a household name. His popularity propelled his congressional win in 1974, where he would be reelected 10 times.

“If you look at the history of the political scene of San Jose, you’ll find that when Norm was appointed to the City Council and then elected as mayor, he became the conduit for other folks in this valley,” Honda said. “He gave voice to the voiceless.”

His destiny for greatness could be spotted early in his life. In college, the 5’6” San Jose High School student secured the center position on his basketball team, served as student body president and earned a spot at UC Berkeley before serving in the U.S. Army during the Korean War. These accomplishments followed years in a Japanese internment camp, where in his youth Mineta and his immediate family were held at gun point and forced to leave their home on Fifth street in Japantown for a camp in Heart, Wyoming.

“Imagine a young boy, American citizen suddenly made a prisoner in his own country for no reason other than that he was Japanese American. For most of us, what happened would have resulted in a lifelong rage,” said Panetta, a longtime friend of Mineta who served in congress at the same time. “Not Norm. It made him fight even more for a better America for the rest of his life.”

“He decided that he would find a way to make sure it never happened again,” Clinton said. “He teaches us that you have a choice and he made a choice. And the choice that he made was to be the author of his own life… He made the right choice.” 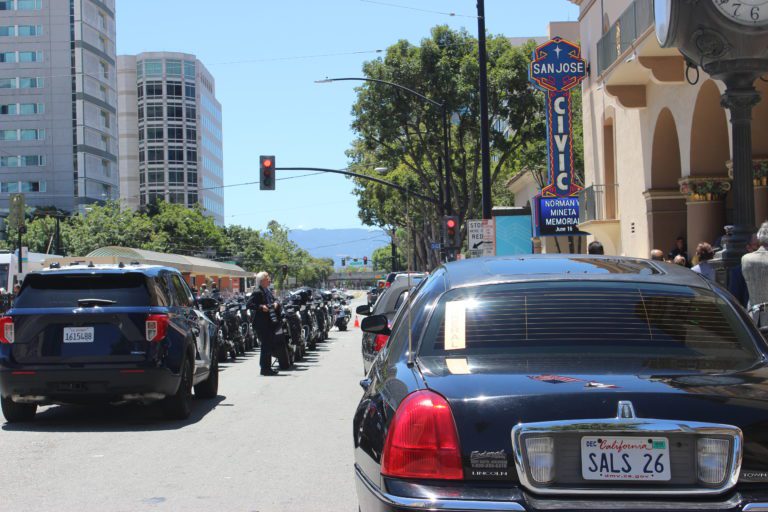 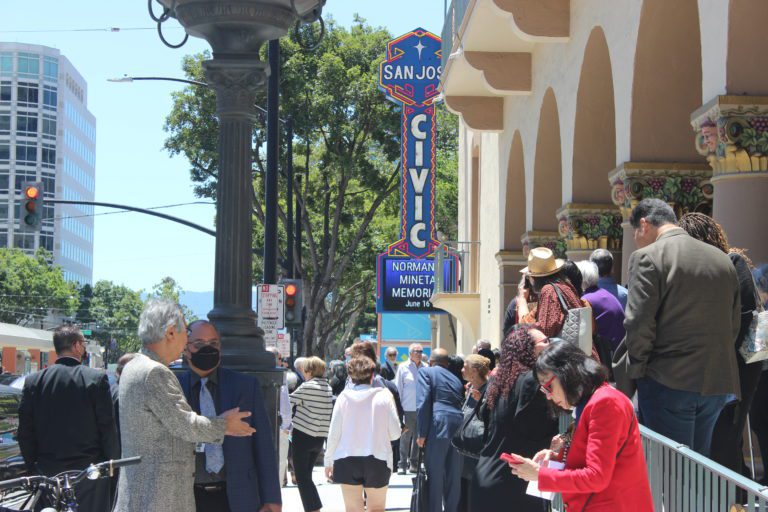 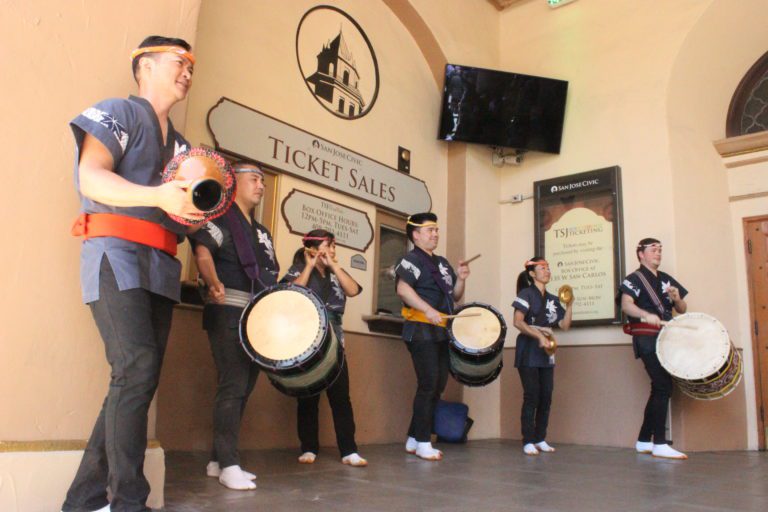 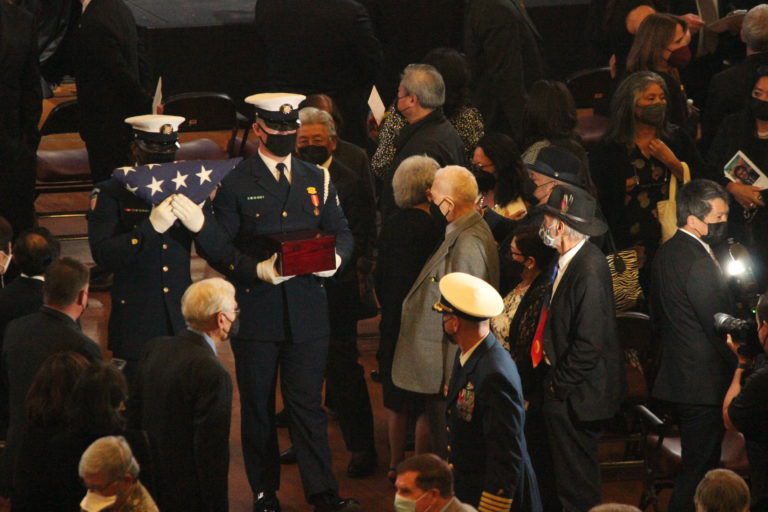 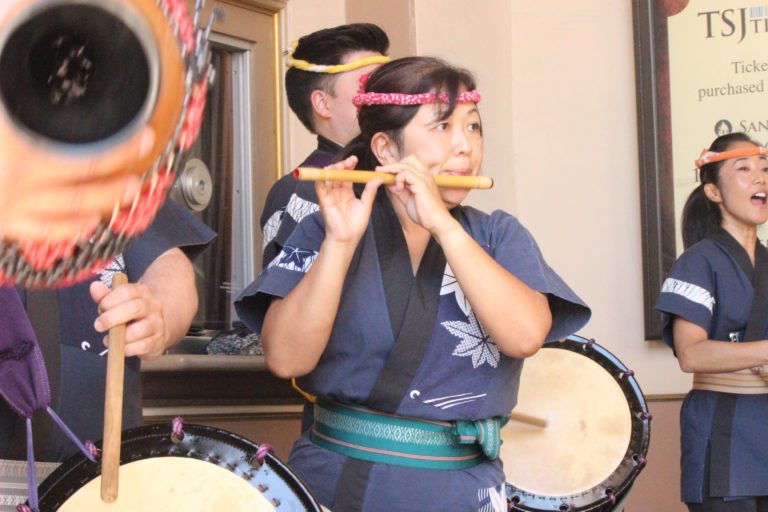 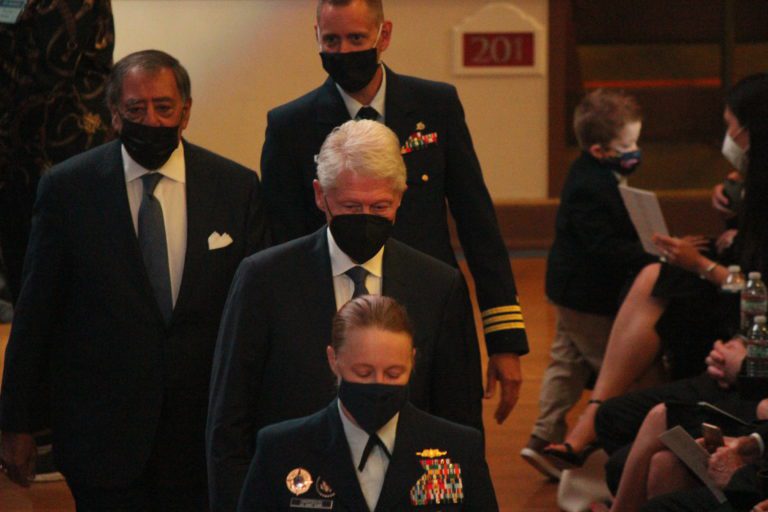 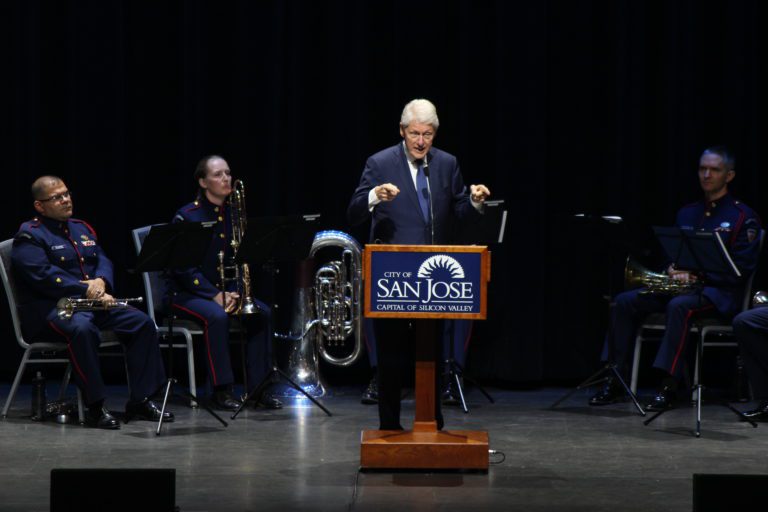 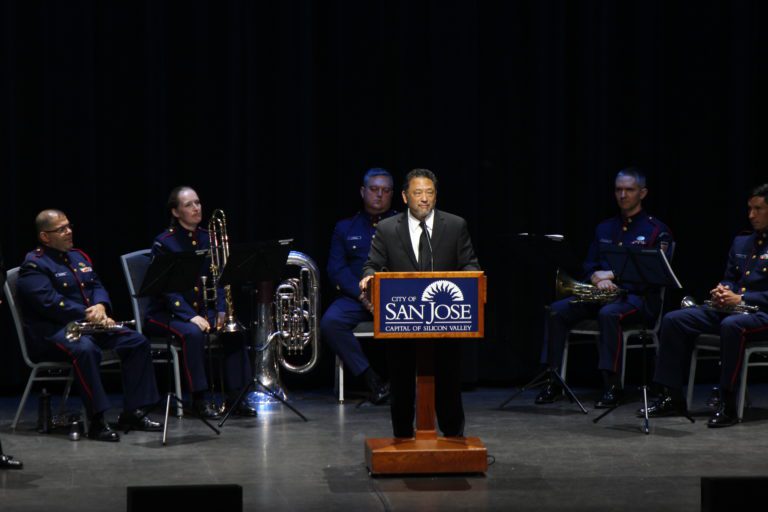 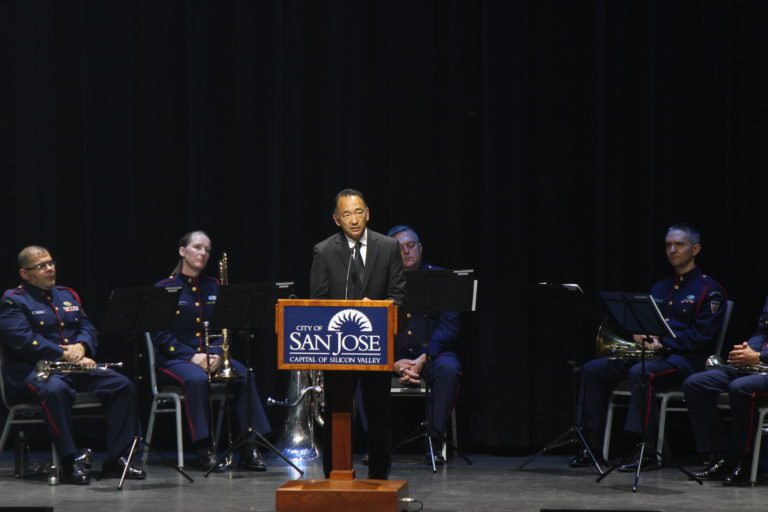 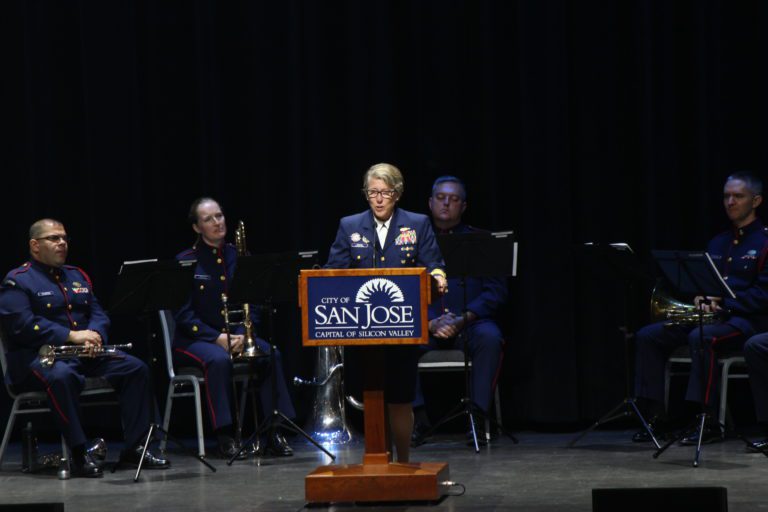 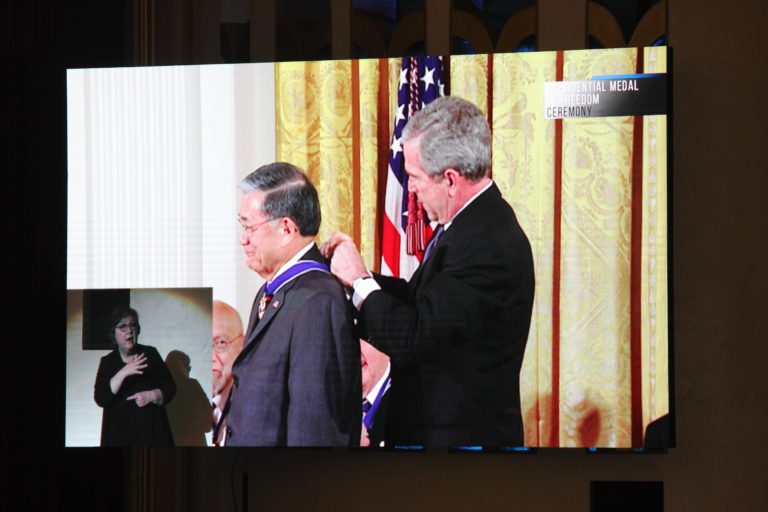 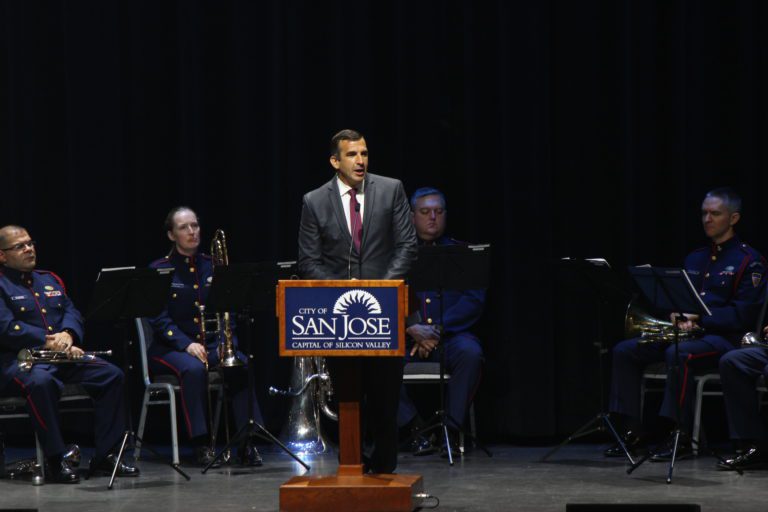 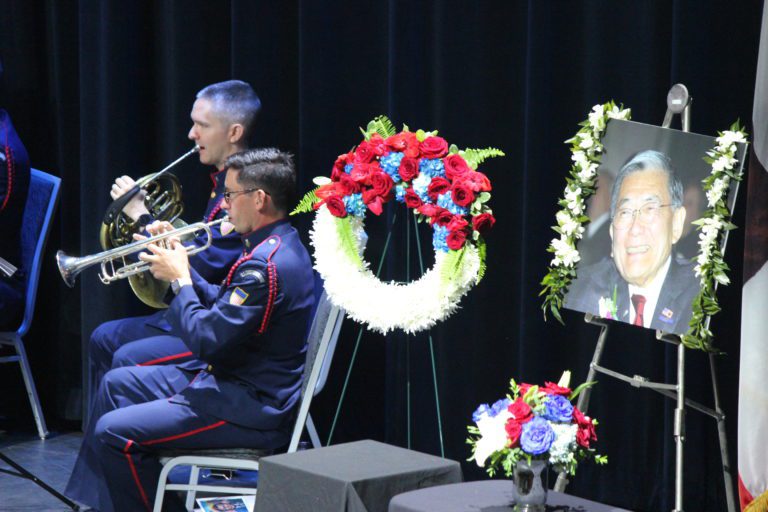 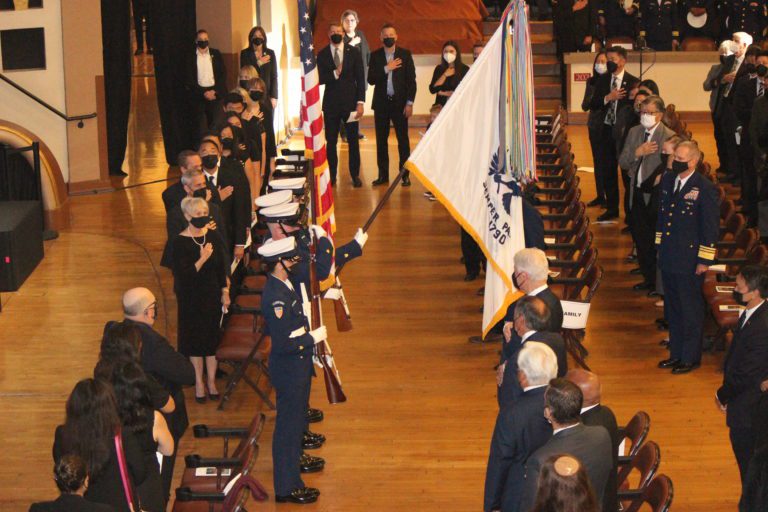 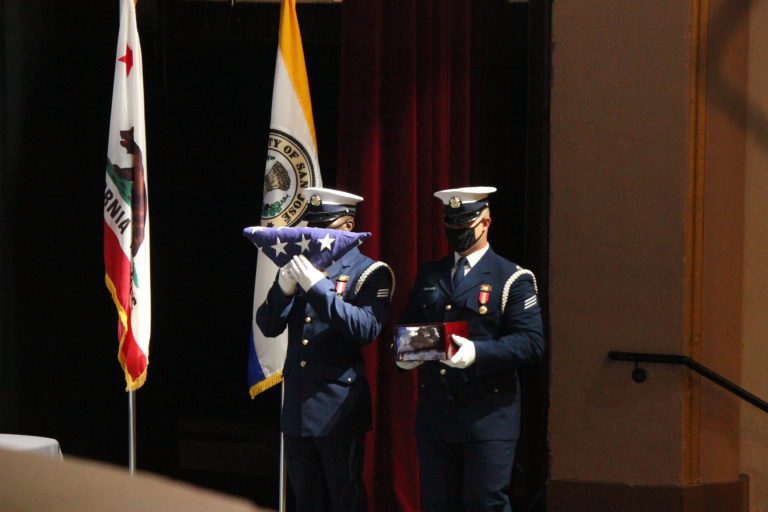 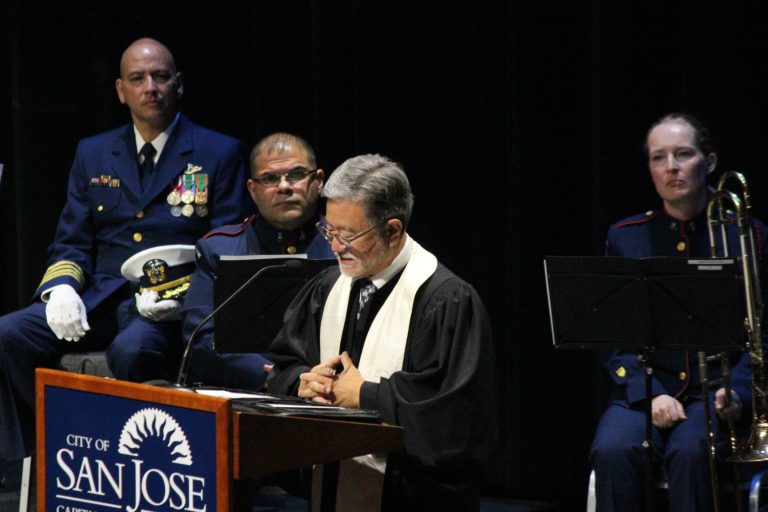 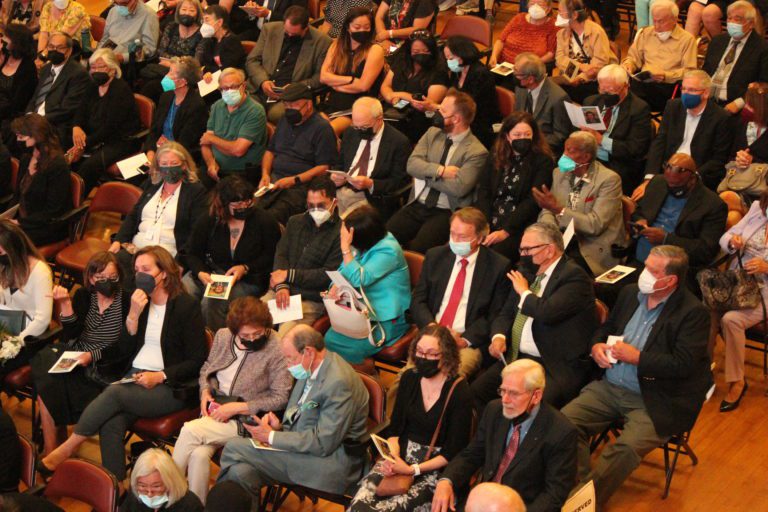 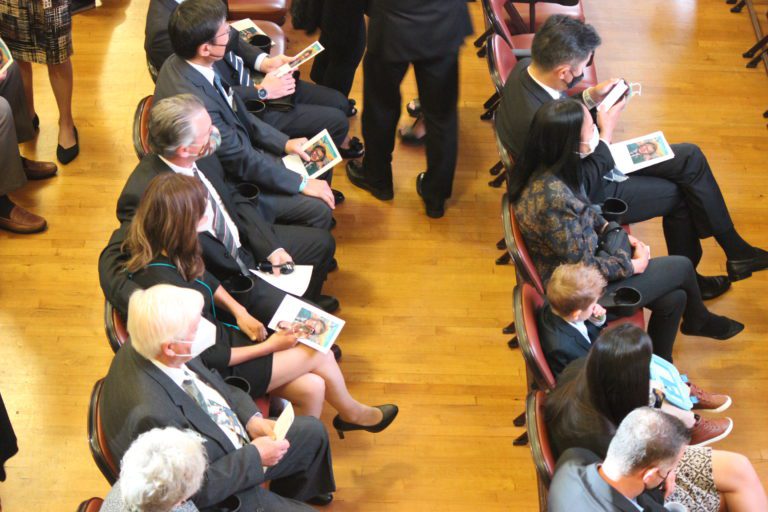 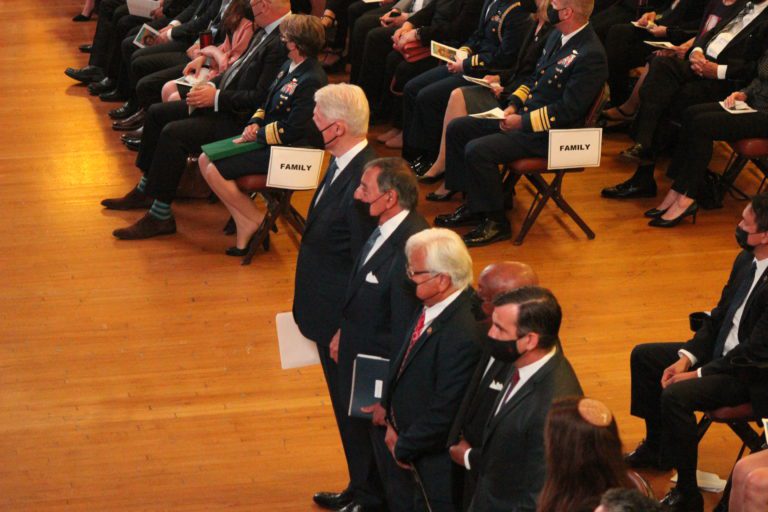 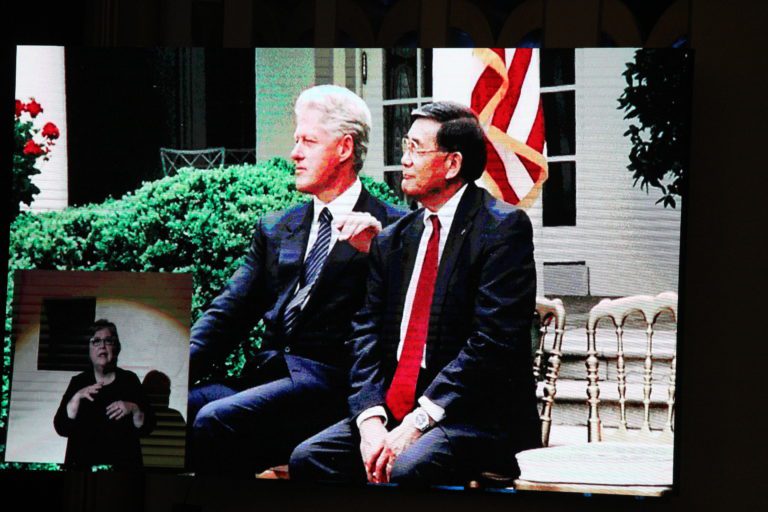 In a 2021 interview with San José Spotlight, Mineta said his background and experience in the internment camp inspired his advocacy and public service. Mineta also said his favorite job was serving as mayor.

Mineta’s sons, Stuart and David Mineta, and stepsons Bob and Mark Brantner noted their father’s professional accolades, but also spoke to his kind heart, impeccable integrity and generous love. They described their memories campaigning as a family or going to the museums in Washington, D.C.; how he was a talented artist, an affectionate and involved grandfather and a public servant who would stay up late to write every eighth grader in his district a handwritten note after they visited the Capitol.

“Dad loved family, he loved that sense of togetherness and closeness that family provided and encouraged,” said Stuart Mineta. “Dad extended that idea of closeness to beyond just our family.”

The sons thanked the community in the same way their father did, and said “thanks a million” for welcoming their father back to San Jose.

“What made Norman Mineta’s odyssey so remarkable is that even as he reached the national stage, he never really left history. He took San Jose with him,” said Liccardo, who led the effort to commemorate June 16 as Norm Mineta Day. “All of his story is our story.”