Business
by Carly Wipf
A view of San Jose from the East-Evergreen side of the city. File photo.

Silicon Valley in 2021 is a tale of two economies.

COVID-19 is forcing many residents to grapple with death, unemployment and the threat of eviction, while big-tech companies are thriving, according to a new report.

The 2021 Silicon Valley Index, released by the nonprofit Joint Venture Silicon Valley’s Institute for Regional Studies details how stark inequities in the local economy, health, hunger and digital access are more pronounced than ever before.

While previous indexes shed light on Silicon Valley’s growing income gap, the latest one notes how the pandemic has intensified disparities.

Compared to this time last year, the region is down by 61,000 jobs, according to Hancock.

Unemployment in the “in-person” economy soared above 30 percent during the pandemic, while many in the “work-from-home” economy continued to clock normal full time hours. People who work in-person jobs often do so at the cost of their own health, and are much more likely to contract COVID-19 than remote workers.

The burden of unemployment or inability to safely socially distance didn’t fall equally across Silicon Valley’s residents with ethnicity playing a significant role in who is more likely to contract COVID-19.

“The Index always tells happy stories about our economy; it also tells us very sad stories,” Hancock said. “And one of the saddest of all is for us to report that Hispanics among us are contracting the disease at a rate that is five times higher than the rest of the population and this, of course, correlates directly to their employment status, which is overwhelmingly in the service sector.”

The index found pandemic-related job losses skyrocketed unemployment to an unprecedented 11.6% in April. This was higher than unemployment seen during the Great Recession and dot-com bust. Industries hit hardest were food services sectors, arts, entertainment and recreation and personal services. 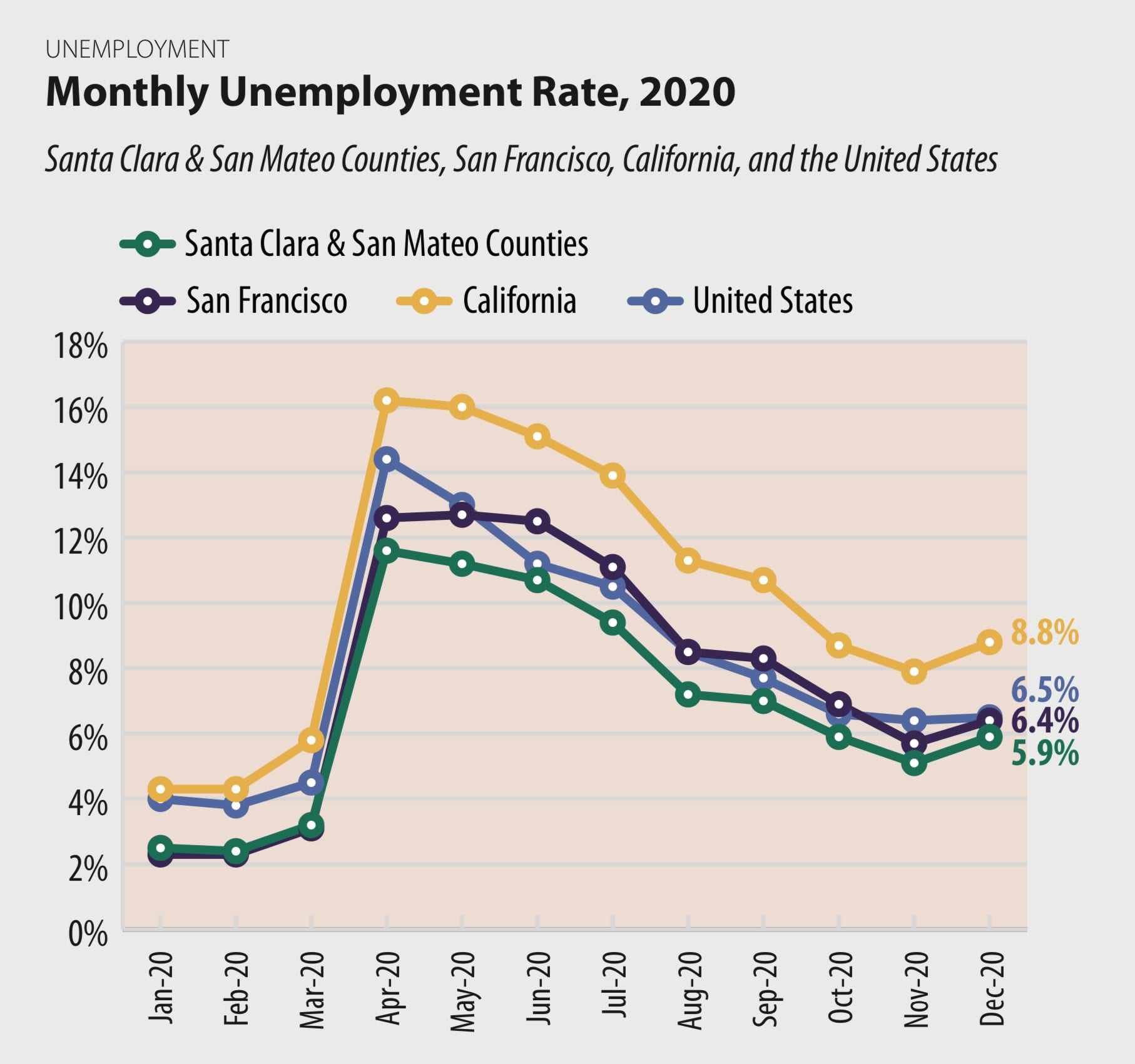 Black and Latino individuals filed initial unemployment insurance claims at rates up to 2% higher than their white counterparts. Half of the region’s Black households and 42% of its Hispanic households are at a greater risk for eviction and food insecurity. In general, CalFresh applications tripled between February and May, according to the index.

In the first three months of the pandemic nearly 44,000 low-income renters struggled to pay rent after losing work, and approximately 197,000 households were at risk of losing their home if the eviction moratorium hadn’t been in place, the index noted.

“The data in this report is really important but what is even more important is the action that comes from it,” said Jennifer Loving, CEO of Destination: Home, a housing advocacy organization. “We don’t need more evidence about the problem — we need collective action about how we’re going to solve it.”

Loving said it is possible to use statistics to directly help those most impacted by the economic downturn. Since the start of the pandemic, Destination: Home has provided $31 million in direct financial assistance to 14,000 low-income households, 94% of whom identified as people of color, Loving said.

The index also noted that groups such as Second Harvest of Silicon Valley provided 10.2 million meals in response to increased hunger.

On the other side of the fence, the tech industry saw a record-breaking year for construction and investment.

While the region saw a loss of more than 151,000 jobs by June, the technology sector underwent minimal layoffs. Overall employment was up by 2% and an unprecedented 21 million square feet of commercial construction took place.

“COVID just further exacerbated the stark difference between what’s going on between Main Street and Wall Street and a lot of the things needed to keep (the economy) going benefited and profited tech companies,” land-use expert Bob Staedler said. “If you look at Zoom and Amazon, they’re the easy big winners in this and we didn’t see as much corporate philanthropy that we probably should have seen.”

Hancock said the pandemic highlighted the importance of Silicon Valley tech. For example, Zoom and Slack have become a cornerstone of daily work life.

But technology was another issue for many low-income residents. Internet speeds dropped as more people depended on the internet for work and entertainment, and many students lacked reliable connections they needed for school.

“It’s not possible to talk about Silicon Valley, our economy, our ecosystem, our society, our community without talking about the pandemic and the wide ranging impact that that has had,” Hancock said. “I just don’t want anybody in the world to lose sight of the fact that we’re weathering this pandemic thanks in large part to Silicon Valley innovation.”

Local officials, residents and experts will tune in to the 2021 State of the Valley conference Feb. 23 and 24 to discuss the index’s findings. To register, click here.