HomelessnessSan Jose
by Tran Nguyen
Steve and Nevada Flores have lived on the streets for three years after Nevada was diagnosed with cancer. They both stopped by the Gardner Medical truck for services at a recent resource fair at Columbus Park in San Jose. Photo by Tran Nguyen.

Worrying about the living conditions at one of the largest homeless encampments in the Bay Area, a local nonprofit hosted a resource fair this week to bring jackets, snacks and housing and health services to the neediest near San Jose’s Columbus Park.

More than 120 people came strolling down Spring Street Wednesday morning for clothes and services. With pop music blaring in the background, some fairgoers busted out impromptu dance routines in between their visits at each table. The fair, organized by a nonprofit called Opening Doors 2020, featured Gardner Medical, services and shelter provider HomeFirst and social services provider Working Partnerships USA among other resources and programs to help people find a way to get off the streets before the city sweeps them off the Columbus Park site.

San Jose is under a fast-approaching deadline to clear its largest encampment site near Columbus Park. The Federal Aviation Administration demanded the city remove homeless residents living near the intersection of Spring and Asbury streets. The land sits under the flight path of Mineta San Jose International Airport and is unsafe due to its heavy noise pollution and proximity to runways. The FAA is threatening to withhold millions of dollars if the encampment isn’t cleared by April.

“With the big clean-up coming, this is prime time for us to do this,” David Hernandez, executive director of Opening Doors 2020, told San José Spotlight. “I hope people will have something to land on by that time. These folks are truly at the bottom right now.”

‘Trying to make the best of it’

Opening Doors 2020, formed just prior to the COVID-19 pandemic, and has been feeding tens of thousands of unhoused residents weekly in downtown San Jose. Hernandez said his decades of experience in running San Jose homeless shelters helps him understand the needs of those who have fallen through safety nets and into the streets. 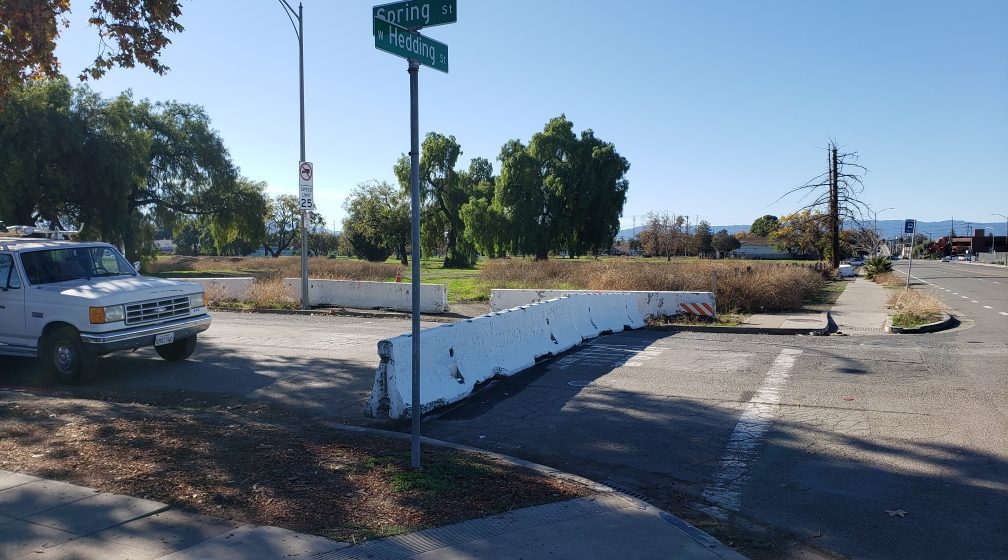 The nonprofit is planning to host another event in February or March with more services and providers, Hernandez said.

Abbas Moosavi has bounced around San Jose for the last 15 years before he landed in the sprawling encampment site near Columbus Park a few months ago.

At 67, Moosavi knows seniors are easy targets for violence on the streets. He learned how to look out for himself, but couldn’t stop people from breaking into his RV and stealing all his clothes a few weeks ago. On Wednesday, Moosavi left the resource fair with a large bag of jackets—and a big smile.

“These will help warm me up during the cold nights,” Moosavi told San José Spotlight. “I still don’t know what to do when they kick us out. I’m just trying to make the best of it.”

Many unhoused residents near the park came to the fair for the free jackets, as winter weather has left them cold and wet. But some said the health services, where county workers helped residents sign up for Medi-Cal or connected them with the right medical agencies, was the most important.

Carlos Rodriguez traveled from another camp in the city to the fair to get help with his teeth.

“My molar is hurting,” Rodriguez said. “I can’t even eat.”

After getting his pick of jackets, Rodriguez stopped by the Santa Clara Family Health Plan table and signed up for a health care plan.

“Thank you my man,” he told the county worker manning the table.

Nevada and Steve Flores fell into homelessness three years ago after Nevada was diagnosed with cancer, the couple said. They’ve been staying in an RV near Columbus Park for the last six months.

“I used to be a truck driver, now my job is to take care of her,” Steve said, becoming overwhelmed with emotions. “She’s my No. 1.”

They both stopped by the Gardner Medical truck, as Steve needed treatment for Hepatitis C.

“We don’t like to, but we do accept hands-out sometimes,” Steve said. “Between her health conditions and mine, it’s tough.”