When Yajaira Gutierrez first heard of a widespread survey about the potential closure of Reid-Hillview Airport in East San Jose, she was surprised by what it found.

“I thought the results were really alarming,” Gutierrez told San José Spotlight. “It didn’t make sense to me that the community would rather keep that airport open than shut it down.”

The results of the survey, which found that the majority of San Jose residents oppose the closure of Reid-Hillview Airport, seemed so out of place that Gutierrez—a graduate student at San Jose State University—decided to talk to residents herself.

She along with four other Master’s of Social Work students—Samantha Adamson, Anastacia Elias, Alexis Plascencia and Anita Rothwell—designed their own survey. The students talked to residents while walking door-to-door in neighborhoods beneath the flight path of planes at Reid-Hillview Airport.

Central to Gutierrez’s concern is the threat of lead pollution from Reid-Hillview. Planes at the airport use leaded fuel, which is blamed for the higher levels of lead found in children living in the Alum Rock area in 2017.

Santa Clara County has taken steps to close the more-than-80-year-old airport, including not applying for a Federal Aviation Administration grant to fund the airport’s maintenance. Accepting the grant would have required the airport to remain open for another 20 years.

The Board of Supervisors voted 4-1 in November to study how to repurpose the land—with possible uses including affordable housing. Attorney Jim McManis sued the county in December 2019 for spending taxpayer money on exploring these alternative uses of the land.

Maricela Lechuga, a Santa Clara County airports commissioner, worked with the students on completing the survey. She said she was motivated by the desire for better data compared to what was provided by a District 5 United survey. That survey, which had 1,300 responses, showed a majority of San Jose residents opposed the airport’s closure.

“It was just such a flawed methodology. Anybody in the world or us could fill it out,” Lechuga said. “Not everybody in this community has access to the internet.”

The SJSU graduate students attracted 40 respondents to their survey, 30 of whom answered a question about the closure of Reid-Hillview Airport. 19 respondents favored of Reid-Hillview’s closure, while 10 said they needed more information. Only one respondent opposed closing the airport.

Adamson said they wanted to make sure they surveyed residents who lived directly beneath the flight path of the airport, rather than an unknown number of anonymous individuals. Adamson said many residents they talked to didn’t even know the airport used lead-based fuel.

“People move into the area, and they obviously know there’s an airport,” Adamson told San José Spotlight. “But not that they’re using lead-based fuel… How many other people must not know?”

Elias said she was surprised at how many people were open to the survey and eager to learn more about the airport.

“There’s a momentum to want to make some changes… This is their home, this is their safe place,” Elias said. “It was really surprising to know how many people wanted to know how they could help.”

Elias said the fact that many parts of East San Jose have historically been redlined—or deemed unworthy of investment by banks and other lending institutions for housing loans—creates a sense that the area is not important to the powers that be.

Plascencia agreed and said the families with children she spoke to recognized the risks, but were uncertain about what steps they should take. 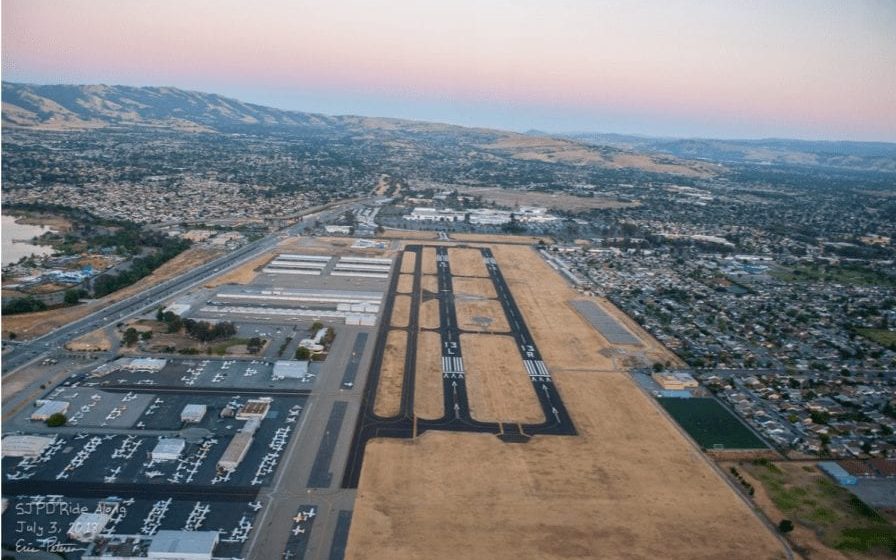 “They’re just unsure of what route to take overall, and how much their voices will actually be heard,” Plascencia said, adding that she has kids and could see herself in the families she talked to. These similarities increased her motivation to survey residents and get their voices heard.

“I feel really comfortable speaking to families, especially the Hispanic community,” she said. “I have children myself, so seeing that we could possibly make a change to provide a better environment and community, why not?”

The vast majority of respondents—26 out of 30—did not know that airplanes at Reid-Hillview Airport use lead-based fuel, the students said. The students also provided residents information about lead toxicity, including the correlation between lead exposure and ADHD.

“We were just exploring the symptoms,” Rothwell said. “Part of our strategy was giving the information, so by the time (residents gave) their response, it was more informed.”

Santa Clara County will publish a study showing blood lead levels of residents living near the airport sometime in late July, according to Supervisor Cindy Chavez.

Elias said the more information residents know about the lead exposure from the airport, the more equipped they’ll be to act. Gutierrez and Lechuga created a website for residents to learn more about lead exposure and how to contact county officials.

“The number of people that we met, not knowing about this issue… it’s intense, it’s a lot,” Elias said. “That’s the reason we’re in social work, is to highlight these things and to bring them up into the spotlight.”