But for San Jose Mayor Sam Liccardo and Councilmember Raul Peralez, who both sit on the VTA board, the higher budget or delayed opening wasn’t as much of a concern as the lack of pedestrian access to the planned Downtown San Jose BART station. The lawmakers called for a second downtown station entrance.

The lively session on Friday included discussion of changes to the current plan, with board members representing San Jose raising flags about the concept for the BART station set to be built downtown. Phase II of the BART Silicon Valley project was expected to be done with construction and testing in 2025 and ready for passengers in 2026.

In his presentation to the board, VTA Deputy Director Dennis Ratcliffe walked through the challenges of the past few years which led to the 4-year delay, including the disagreements between VTA and BART on things like tunnel configuration and size.

The latest version of the Phase II plan has a large 55-foot bore, which Ratcliffe estimated has increased the cost of the project in the neighborhood of $700 million to $800 million. On top of this budget increase, the extra digging may add to the longer timeline for the project by as much as 12 months, by VTA’s early estimates.

As it stands, the estimated capital costs for Phase II have currently reached $5.6 billion.

“The (updated) cost estimate that we will be developing over the next several months is going to be in this ($5.6 billion) range,” Ratcliff said. “We have quite a number of local sources of funds that are committed. Most of those are fixed although some of them are somewhat elastic.” 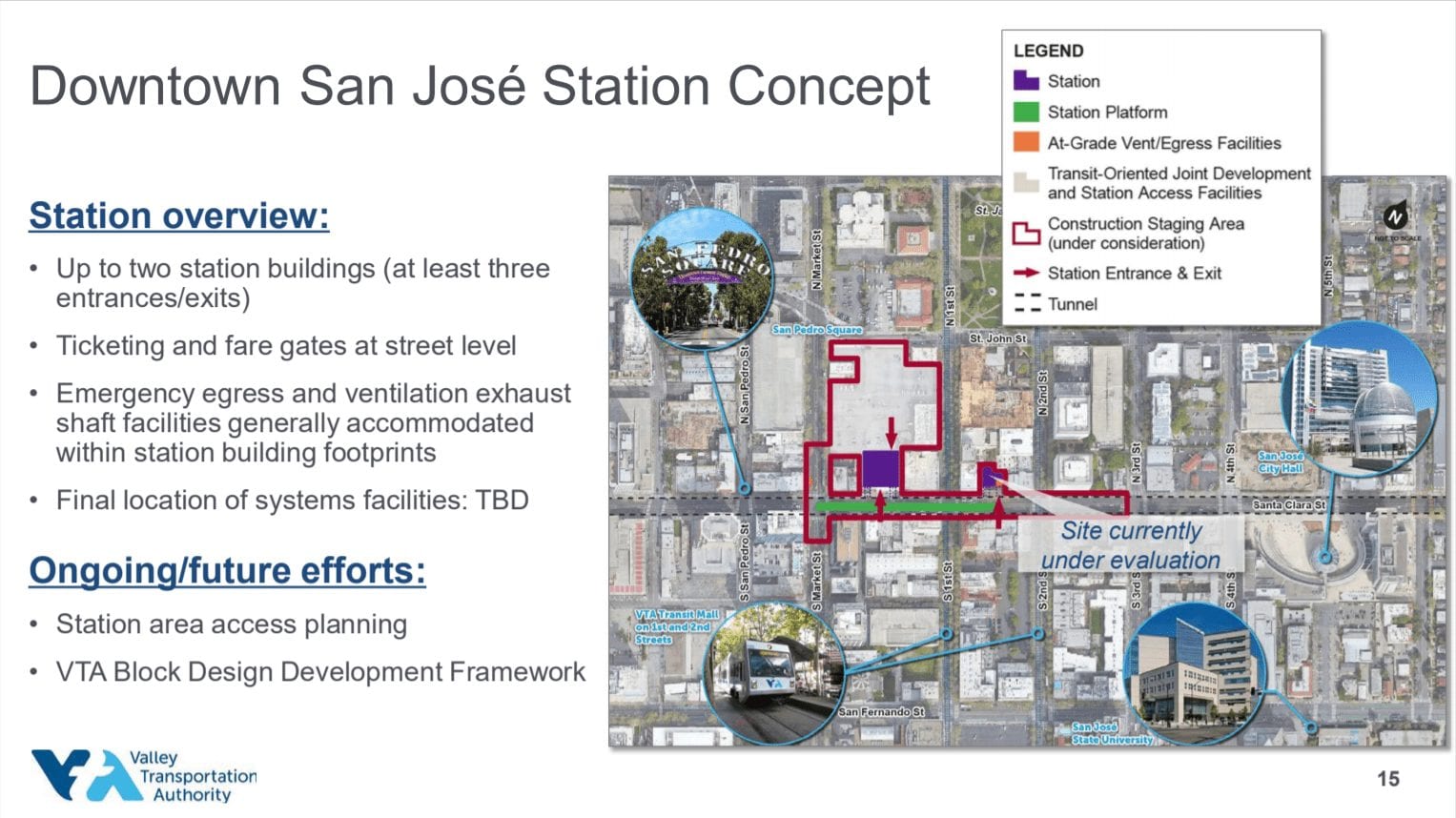 Located along Santa Clara Street, this station will be one of the busiest along the Phase II route that will connect the Berryessa station to downtown and beyond. This single station is expected to welcome up to 24,000 riders during the work week. But the current plan only includes one main entrance — located just north of Santa Clara Street — across an already-busy intersection from many of San Jose’s largest employers and attractions.

“I’m just very concerned about setting ourselves up for having pedestrians cross and clear (Santa Clara) when we know the number of assets in downtown where we expect people to be coming from… San Jose State University, City Hall, Adobe world headquarters, Zoom headquarters, all the entertainment venues,” Liccardo said. “All of those are south of Santa Clara.”

VTA’s off-the-cuff estimate for the addition of a second, south-of-Santa Clara underground entrance to the station would be in the $100 million range.

Peralez stressed how transit leaders have the opportunity, with the project timeline changes, to spend a little extra time on important details such as an entrance on the south side of Santa Clara.

“I don’t think that we can produce this (station) without having an entrance on the other side of Santa Clara here,” said Peralez, who represents downtown San Jose. “I don’t think we need to find… the most expensive solution. In my mind, if we’re talking about something that’s significant, we need to bake it in now.”

Though it’s not in his city, Director Howard Miller, an alternate member representing Saratoga, pitched in with his input.

“My reference would be Tokyo, New York, lower Manhattan,” Miller said. “When I look at this (station concept), there needs to be (an entrance) on at least two different corners to get under the street. And whether you’ve been diagonally across, or however it goes, you end up in our giant station.”

With its recent infusion of $125 million in federal funds, VTA hopes to be done with about 10% of its engineering work by the end of the year.

“By that point,” Ratcliffe said, “we believe we can have (station) concepts cemented and we’ll be pursuing them.”

This will help VTA go back to the Federal Transportation Agency to apply for the rest of the federal money — about $1.3 billion — to help Phase II start construction by 2022.

Activists push for improvements to bus routes during VTA meeting