They say politics is a blood sport. Silicon Valley’s 2018 midterm election, featuring a handful of competitive city and county legislative races, was no exception.

A slew of opposition ads and smear tactics shadowed several Bay Area candidates running for public office this year — including ads bankrolled by a new committee helmed by the CEO of a powerful business group and another ad that spurred public fallout. 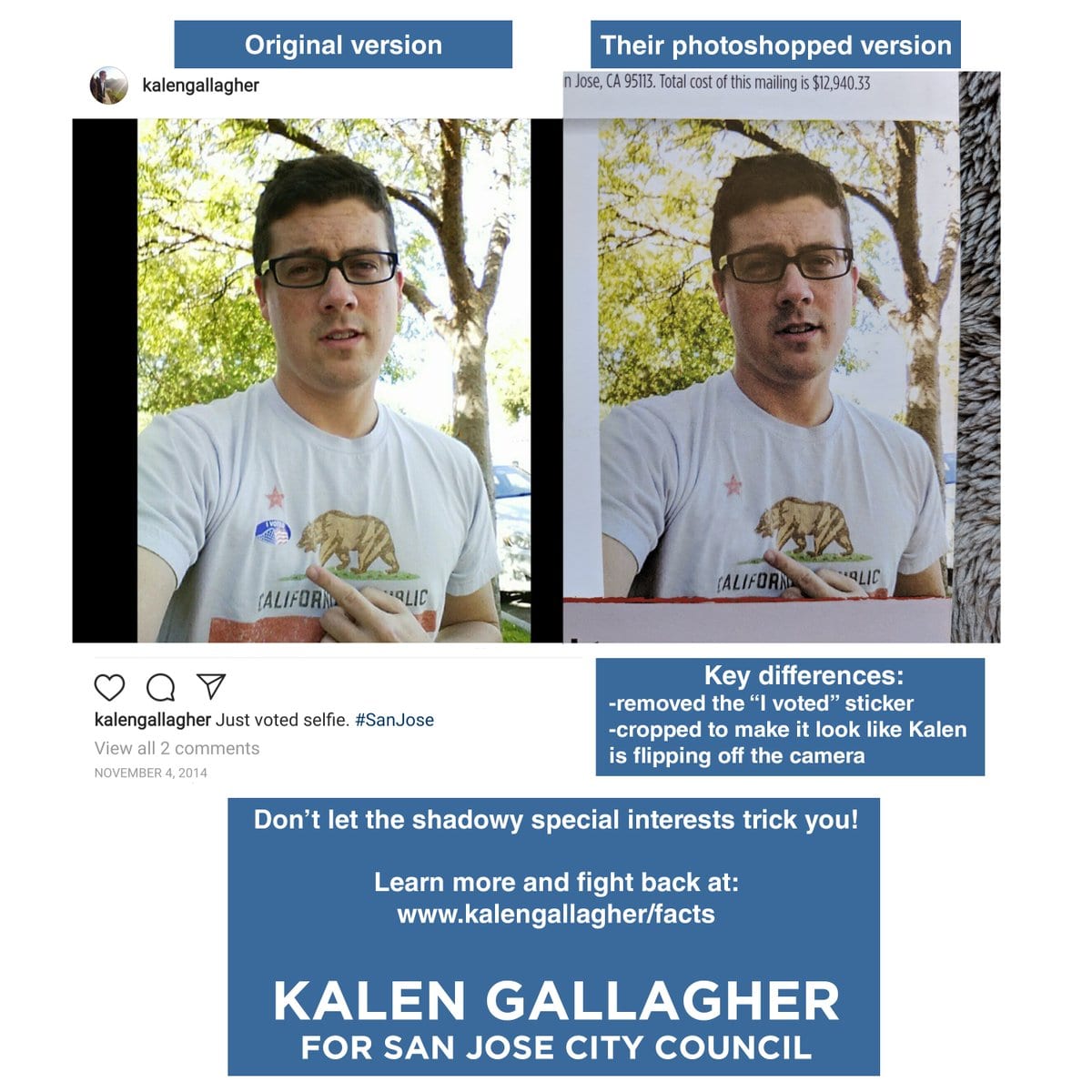 The piece used an image lifted from Gallagher’s Instagram account that showed him pointing to an “I voted” sticker on his shirt — but it was altered to look like he was flipping off the camera. The “I voted” sticker was removed in the mailer image.

The SVO faced immediate fallout from the ad. Armed Courier Service President Dan L. Connolly resigned as trustee of the group’s PAC and ended his company’s membership with the SVO, citing “the disgraceful and misleading photo-shopped hit piece.

“Although I support another candidate in this race, the SVO Executive Director and Staff crossed an ethical line,” Connolly wrote in his resignation letter.

The SVO did not respond to requests for comment.

Hundreds of thousands of dollars poured into the heated race for the District 4 seat on the Santa Clara County Board of Supervisors, replacing termed-out Supervisor Ken Yeager.

A new campaign committee called Innovation for Everyone, headed by Carl Guardino of the Silicon Valley Leadership Group, spent more than $75,000 by mid-October to support supervisorial candidate Susan Ellenberg, who also was favored by other business interests including the SVO. 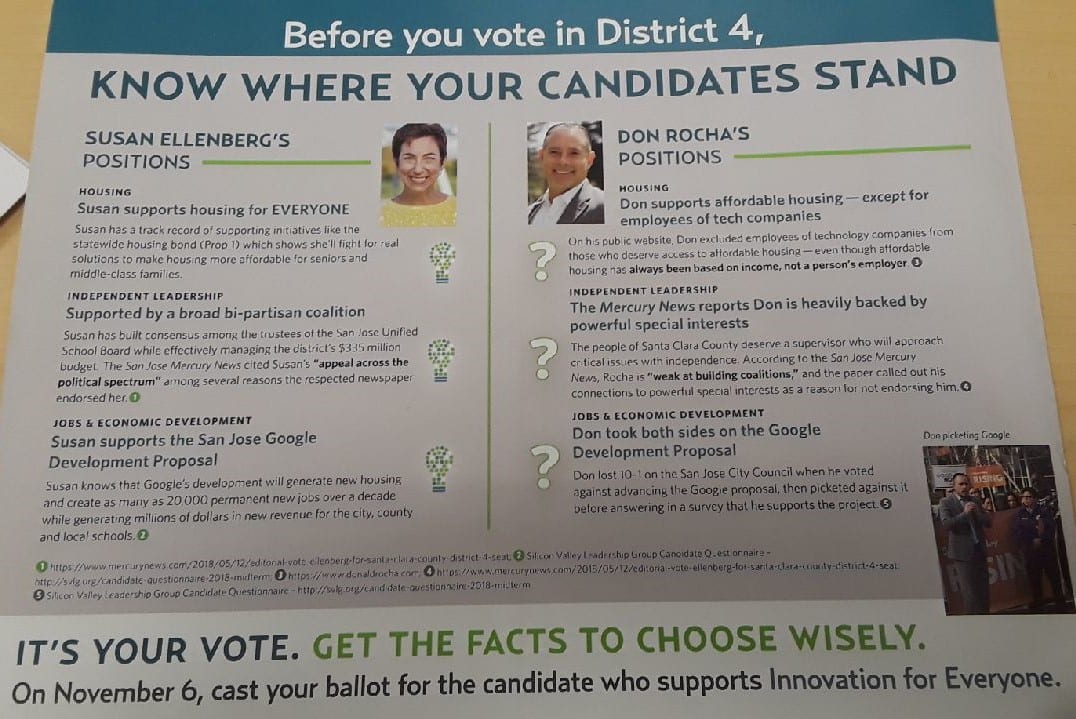 The group sent two mailers opposing Ellenberg’s opponent, San Jose Councilman Don Rocha. One ad criticized Rocha for being “heavily backed by powerful special interests.” However, developers like Blach Construction and Republic Urban donated to Innovation for Everyone, according to campaign finance filings.

Guardino defended the anti-Rocha ads by saying they did not attack — they informed. He added that outside spending to support the councilman was four times more than spending for Ellenberg.

“The anti-Ellenberg mailers were factually and repeatedly inaccurate,” Guardino said in an email. “There is not a single factual inaccuracy in our material.”

Rocha was hit again when a blog with a domain similar to his campaign website’s name sprung up. The anonymous blog posted details about Rocha’s divorce from years ago. The councilman initially accused Ellenberg of putting up the website, which she denied.

Ellenberg, who ultimately won the race by 18 percentage points, also faced her share of attacks.

The San Jose Police Officers Association PAC targeted Ellenberg in a flyer that declared, “She’s not on our side” and is “beholden to the special interests funding her campaign.”

Ellenberg, who’s lived in San Jose for several decades, denounced the ad for its use of language that “suggests that people who were not born in this community…are not an integral part.”

Ellenberg was the subject of another opposition mailer several days before Election Day sent by the Working for a Better Community, a labor-aligned PAC supporting Rocha’s run.

The ad showed a fake check from Jed York of the 49ers to Ellenberg for $25,000. The 49ers did not donate to Ellenberg’s campaign, but contributed $25,000 to Guardino’s Innovation for Everyone committee, which spent thousands of dollars campaigning for her.

The mailer was funded by Business San Jose Chamber PAC. Guevara took to his blog to set the record straight.

“I DID NOT, and I WOULD NOT endorse him under ANY circumstances,” he wrote. “The Business San Jose Chamber PAC is either massively deceptive, or unbelievably stupid, to suggest that Sacred Heart would endorse Mr. Nguyen’s or anyone’s candidacy for election.”

Guevara also accused Nguyen’s campaign of sending a mailer using an unauthorized quote during the primary election. Nguyen apologized after he was confronted, Guevara said, but continued using the quote in subsequent mailers.