Elections
by Todd Perlman
This image of Dave Cortese and President Obama is posted on Cortese's campaign web site.

None may be bigger than the backing Ravel received from former President Barack Obama.

And she wants Cortese to stop misleading voters by implying that the 44th commander-in-chief endorses his candidacy after Cortese produced a campaign mailer as well as TV and digital ads that show him shaking hands with Obama.

The Ravel campaign issued cease-and-desist letters to Cortese and Comcast — where the TV spots have run — over the weekend, calling for the immediate end to the Cortese campaign’s “inappropriate” and unauthorized use of the images.

“By using these photographs, you are clearly attempting to imply the support and endorsement of President Obama for your campaign, which is false and misleading. In fact, as you well know, President Obama has endorsed your opponent, Ann Ravel,” Ravel’s campaign manager, Andrew Berthelsen, wrote to Cortese.

Cortese, a Santa Clara County supervisor, did not respond to multiple requests for comment. His campaign manager, Alexander Maykowski, asked that questions be submitted to him via email, but he did not respond.

Cortese and Ravel, both Democrats, took the top two spots on the March 3 primary ballot in a field of seven candidates running to fill the seat of state Sen. Jim Beall, who terms out this year. District 15 includes San Jose, Campbell, Cupertino, Los Gatos, Monte Sereno and Saratoga.

But Ravel, former Santa Clara County counsel and head of the Federal Election Commission in the Obama Administration, is the only state-level candidate in California to receive an endorsement from Obama.

Cortese’s use of photos with Obama, Ravel said, “shows a lack of integrity.” 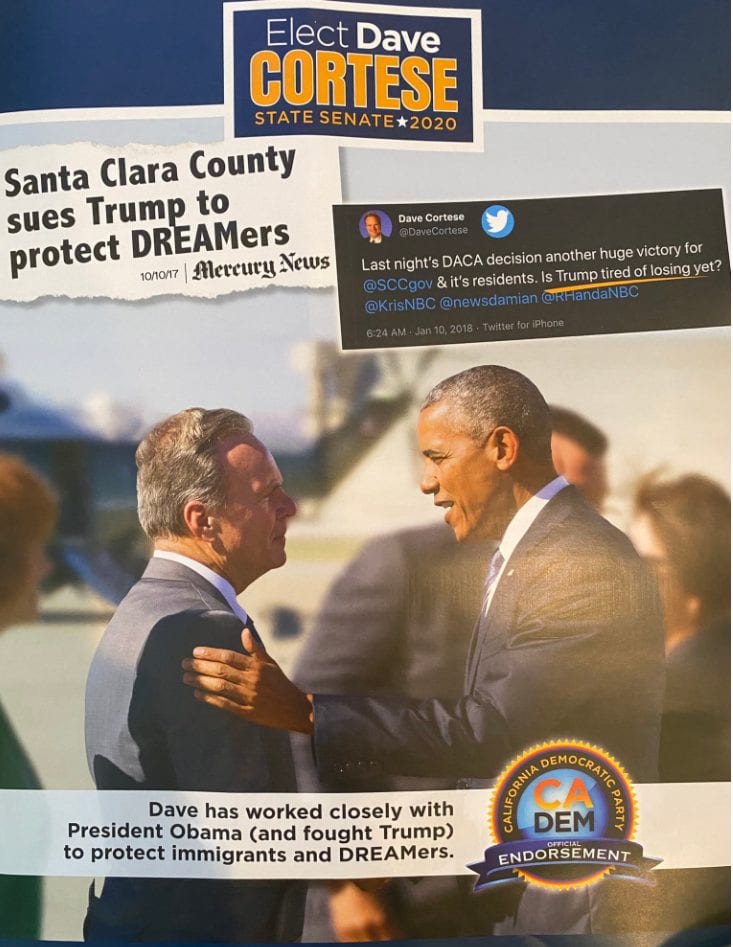 One photo of Cortese and Obama is the centerpiece of a mailer that touts his official endorsement from the California Democratic Party and tells District 15 voters that Cortese “has worked closely with Obama (and fought Trump) to protect immigrants and DREAMers,” referring to the Obama-era Deferred Action for Childhood Arrivals program.

Ravel says this simply is not true.

San Jose Mayor Sam Liccardo, who endorses Ravel, said the Cortese-Obama photos come from a visit to the area by Obama while he was president, shortly after Air Force One landed at Moffett Field near Mountain View. Liccardo, too, was there.

“I just happened to be standing next to the president, right outside of the frame on one of the photos they’ve used, and in the background of another,” Liccardo wrote in a statement provided by the Ravel campaign. “Cortese introduced himself, and spoke briefly with the president — as we all did — and I never heard any suggestion by President Obama that he would politically support Dave Cortese for any office.”

Obama’s endorsement of Ravel came in August, when she was included among a list of primarily federal-level office-seekers whom the former president called a “diverse and hopeful collection of thoughtful, empathetic, and highly qualified Democrats.”

“Together, these candidates will help us redeem our country’s promise by sticking up for working-class people, restoring fairness and opportunity to our system, and fighting for the good of all Americans — not just those at the top,” Obama wrote in a Medium post. “They make me optimistic not just about our party’s chances in November, but about our country’s future long after that.”

In addition to the letter to Cortese, attorneys for the Ravel campaign sent a similar cease-and-desist letter to Comcast California aimed at a political ad produced by Opportunity PAC that supports Cortese and makes claims about contributions from large corporations to Ravel that the letter calls false.

And, by using a Cortese-Obama image “illegally to attempt to mislead voters,” Comcast violates election code, wrote Nora Rousso of the Campbell-based firm Rousso & Jackel. Nowhere does the ad state the Cortese campaign received permission from Obama to use his image, which is expressly required, Rousso wrote.

“Since you are not protected from legal liability for airing false and misleading advertisements sponsored by Opportunity PAC, you should act immediately to pull this ad,” Rousso wrote. “If you continue to broadcast the advertisement … I will have no choice but to seek every legal remedy available under the law.”