Housing
by Kyle Martin
Homeless tents line up near a train crossing at Autumn Parkway near the Guadalupe River. File photo.

A new report on homelessness shows that the Bay Area has the third largest homeless population in the country, with 28,200 people in the region experiencing homelessness.

“The absolute size of the Bay Area’s homeless population, combined with the region’s dearth of temporary shelter options and an insufficient supply of supportive housing, desensitizes the public and condemns the homeless to lives of hardship,” the report says. 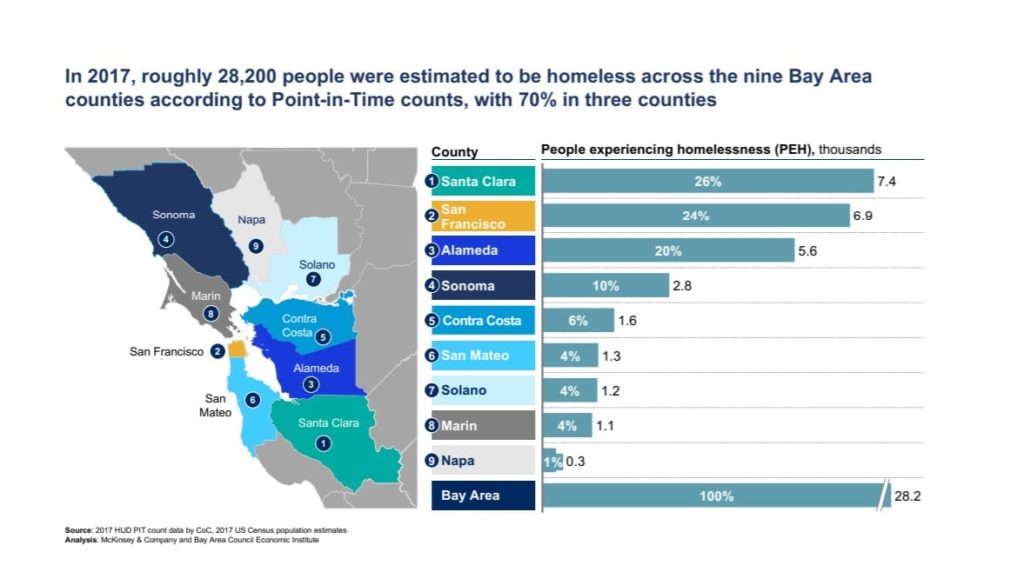 As Silicon Valley housing officials know, and as the report also points out, those affected most by the region’s housing crisis are the region’s lowest earners, who are most at risk of slipping into homelessness.

“Even for households that meet both federal and local guidelines, the scarcity of units creates long waiting lists,” the report says. “A tight rental market also means that landlords can be more selective in choosing their tenants, so that even with voucher in hand, many will not be able to find a landlord willing to rent to them on the private market.”

The report says that the nine-county Bay Area region needs strategically-coordinated efforts to curb the area’s housing and homeless crises, otherwise, “the Bay Area is at risk of backing itself into an inefficient mix of shelter and permanent supportive housing assets.”

Andrea Urton, CEO of HomeFirst, said the report was no surprise.

“It’s basically what we know to be true right now. Nothing was shocking for me,” Urton said. “It’s unfortunately the state of where we are right now, and we need to do something about it.”

The City Council decided during its Tuesday meeting to boost efforts to house the area’s poorest residents by choosing to allocate 45 percent of new housing funds to extremely low-income housing, instead of its originally proposed 30 percent allocation.

“To me, that means that more of the people who are at risk of becoming homeless are going to have the option of affordable housing,” Urton said.

Jennifer Loving, CEO of Destination: Home, told San José Spotlight the recommendations in the report were “spot on,” particularly ones about improving “prevention and diversion programs” and “expanding the housing supply available to extremely low-income households.”

“Homelessness is the biggest and most persistent crisis of the region,” Loving said. “We need to be focusing on systemic, lasting solutions like housing creation and preventing people from losing their homes and becoming homeless in the first place.”

Like what you read? Please support our nonprofit newsroom by becoming a sustainable member and subscribing to our newsletter.

Did you know San José Spotlight is a nonprofit?

Our journalism is made possible by reader donations. If you value what we do, please contribute and help keep this vital resource accessible to all.