Despite the governor’s confusing comments in the State of the State address earlier this year, California High Speed Rail is moving forward with plans to connect the Central Valley backbone with the Peninsula.

In its latest open house Thursday, NorCal HSR employees met with community members along the San Jose to Merced corridor. State Sen. Jim Beall was also on hand to address questions and concerns from constituents.

“Over the past 10 years we’ve looked at many alternatives and options for how HSR can come through the city and up the Peninsula corridor,” said Boris Lipkin, Northern California Regional Director for CA HSR. We’ve now settled on a range of alternatives, we’ve done the technical work to analyze those alternatives, and now we’re looking for feedback.” 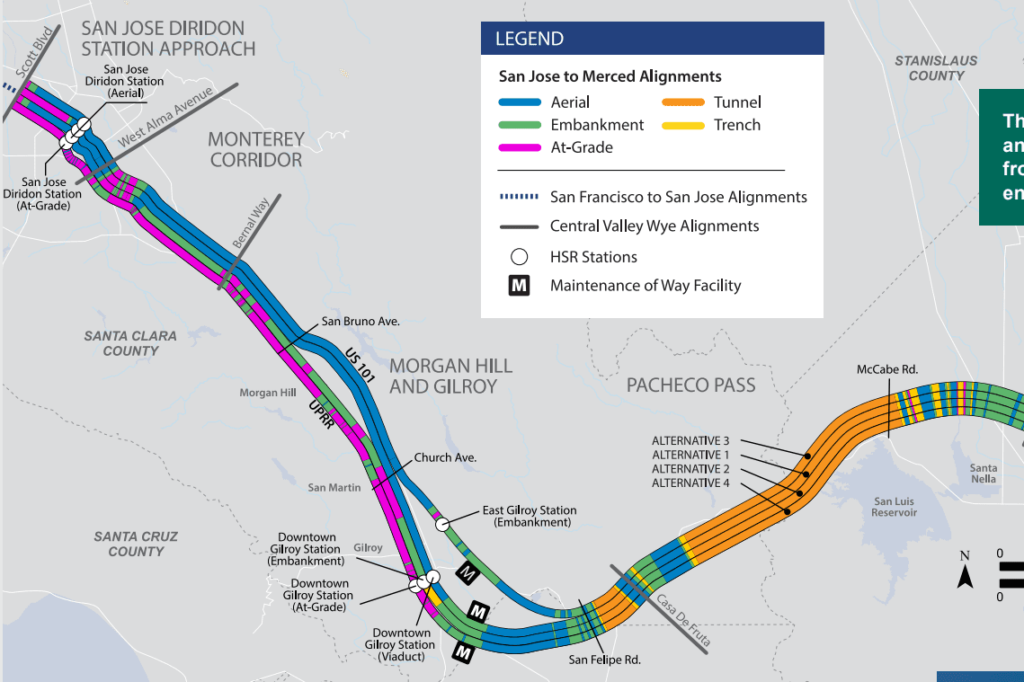 The route that HSR staff wants to put forward as its “preferred alternative,” known as Alternative 4, winds its way from Scott Blvd. in Santa Clara, down by Highway 101, through Gilroy, cutting into a tunnel through Pacheco Pass, and east to Merced. All four options are essentially identical once the train gets to Casa De Fruta outside of Gilroy, so the differences might impact San Jose the most.

By using a blended at-grade system — which means trains will ride either on or alongside existing tracks, instead on a separate tall platform — Alternative 4 has some strategic advantages that make it less expensive, more environmentally friendly and require less displacement of currently used agricultural land.

Alternative 4 also could give Caltrain a big leg-up, providing electrified infrastructure that the commuter system could use to extend service southward to Gilroy.

Perhaps the biggest issue for those living along the proposed route is that it has a risk of being a little louder than the quietest of the alternatives.

Upcoming open houses will be held in Los Banos on Aug. 21st at the Los Banos Community Center and in Gilroy on Aug. 22nd at the IFDES Lodge-Portuguese Hall will continue the community engagement process. Once gathered, the feedback will be rolled into a package with the recommended route and presented to the HSR board in September.

The San Jose City Council is expected to accept the HSR staf report and endorse Alternative 4 during its meeting Tuesday.