Economy
by Rex Crum
Polar Bell Embroidery store Manager Trung Le says business is down in the San Jose shop but the doors are open. Photo by Lorraine Gabbert.

The end-of-the-year Christmas and holiday shopping season is traditionally a time retailers of all sizes rely on to bring in strong sales, and in some cases, make their entire year a success.

But the COVID-19 pandemic is likely to put a damper on the season’s usual good tidings this year as merchants are limited to the number of customers allowed in their shops at once.

And many consumers, who changed shopping habits and shifted their buying dollars online and away from local merchants as the pandemic took hold earlier this year, are saying they don’t intend on returning to traditional Main Street businesses during the upcoming holiday season.

According to a recent survey by Alignable, a Boston-based online business referral network, 68% of consumers have no plans to increase the amount of money they expect to spend at local merchants for the rest of the year.

The study, which included surveying 5,831 American consumers from Oct. 10-14, paints what could be a rough scene for retailers who had been hoping the holiday season would spur people to get out of their houses and crank up shopping in local communities. 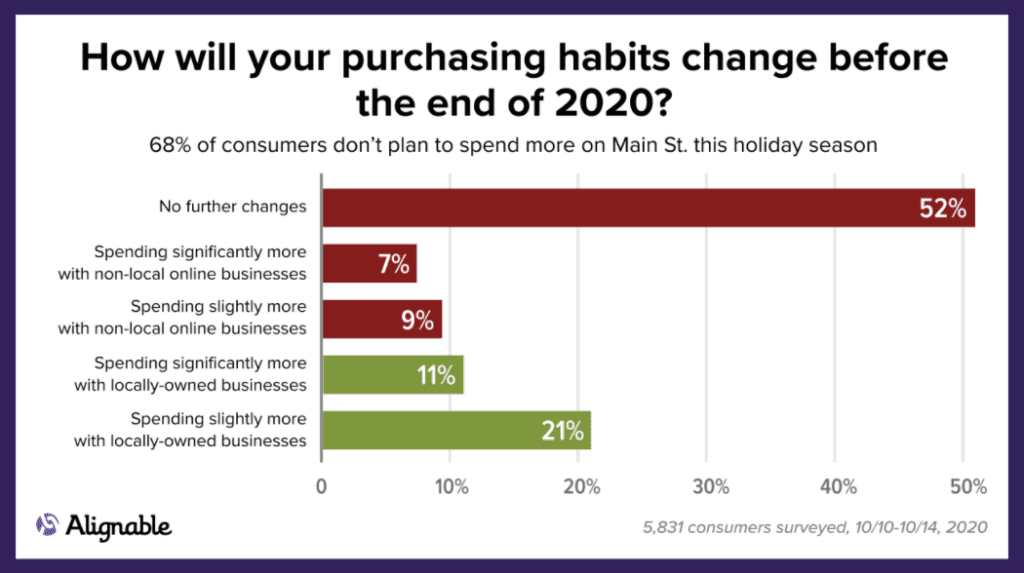 Among the survey’s findings, 52% of respondents said they don’t plan on making any changes to their shopping habits heading toward the end of the year, while 9% said they anticipate spending “slightly more,” and 7% spending “significantly more” on non-local businesses online for their holiday gift buying.

The potential for a less-than-spectacular holiday shopping season isn’t lost on merchants such as Trung Le, manager of Polar Bell Embroidery, on Jackson Street in San Jose’s Japantown district.

The shop — which closed in March, reopened in June, closed again, and then reopened in September — provides embroidery and digital and screen printing services. It counts Cisco Systems and the San Jose Sharks among its customers.

“Normally, we’re extremely busy during holidays,” Le said. “Right now, we’re doing about 15 orders a week, and we normally do around 25 a week. Based on how things are going now, I think we’ll be doing a little less than usual during the holidays.”

Of course, hovering over everything are concerns about COVID-19 . As of Oct. 31, Santa Clara County reported 25,139 COVID-19 cases, according to data from the county’s public health department. Meanwhile, nationwide, a single-day record of more than 90,000 new COVID-19 cases was reported Oct. 29.

“Even in a good economy, many retailers count on Q4 (fourth quarter) sales to make up for the rest of the year,” said Alignable Chief Executive Eric Groves. “COVID safety concerns still loom large for many consumers, which, sadly, could turn 2020’s holiday shopping season into the worst one in years for local retailers.”

Still, as the pandemic has gone on, some consumers say they aren’t as worried about COVID-19 as they were a few months ago. However, the number of people who say they plan on increasing spending with local merchants during the holidays remains dwarfed by those intending to tamp down on their Main Street shopping.

According to Alignable’s survey, only 11% of respondents said they intend on spending significantly more, and 21% expect to spend slightly more with locally owned businesses over the holidays.

However, for merchants like Le, something remains better than nothing.

“We may be doing just OK but our doors are still open,” Le said.