The event served as a kickoff for a year’s worth of activities celebrating women’s history and activism, to be led by the Women’s Equality 2020 Leadership Council.

Nearly one hundred people headed to the Martin Luther King Library in downtown San Jose, clad in white and wearing “Votes for Women” sashes. They waved signs and chanted phrases such as “Equality and voting rights respected here.”

According to Santa Clara County Supervisor Cindy Chavez, the gathering celebrated the passage of the 19th Amendment while also acknowledging the groups it marginalized, including women of color and the LGBTQ+ community. The countywide council intends to leave no one behind.

“This is a year for us to wrap our arms around our entire community and bring everybody forward,” Chavez said.

“You in the community are our ambassadors,” Santa Clara County Office of Women’s Policy Director Protima Pandey said. “We need to get more women, more girls, more gender-inclusive people who identify with women… We have to get their voices and bring it and uplift it. I hope I can count on you.”

Ana Escalante, 22, and Cristal Rodriguez, 23, attended the rally together. Rodriguez, who attends San Jose State University and plans to become a lawyer, said eradicating the wage gap is a crucial step to reaching gender equality.

“We work the same, and we do the same,” Rodriguez said. “We work as hard as men. We don’t take any shortcuts.”

Escalante is a student at UC Santa Cruz and an intern at the Santa Clara County Office of Cultural Competency. She hopes the Women’s Equality 2020 Leadership Council will encourage youth to be more civically active and suggested the use of social media or student ambassadors.

“There’s been a lot of struggles, and supporting this event, especially voting, is very important,” Escalante said. “If we see more youth out there, it would be really great.”

Attendees were given the chance to have their voices heard through “soapbox speeches,” similar to how suffragettes carried soapboxes to marches and spoke to crowds from them. The individual speeches covered a wide variety of topics, including child marriage and sexual harassment.

The first soapbox speaker was Tía Maria, 99, who is the oldest living Rosie the Riveter and as old as the 19th Amendment itself. She urged the future generation to continue the work of their parents and previous generations. 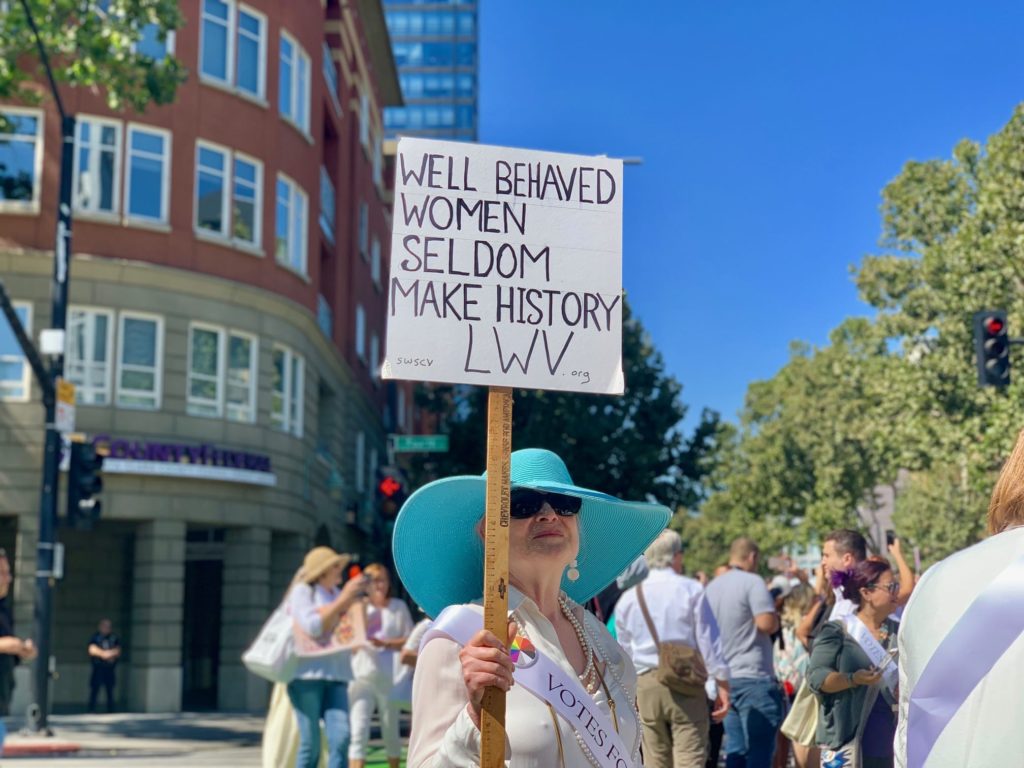 Supporters were encouraged to wear white clothing, but members of the Greater Bay Area Costumers’ Guild took it a step further. Lori Clayson, 55, wore a vintage hat passed on from her grandmother, a cotton blouse she found in a vintage shop, a brooch she found on Ebay, and a linen skirt she sewed herself. She skipped the corset, though.

She noted that the 19th Amendment passed because of a mother’s encouragement: “It came down to this one young man, a young senator. He was against women’s right to vote, but his mother wrote him a letter and said, ‘You have to give women the right to vote. Do it for your mother,’” she said Monday.

Clayson draws inspiration from this story, encouraging her two daughters to vote. Even her 96-year-old mother turned in a ballot for the last presidential election.

Vince Feliciano, 19, who attended the event as an intern for the Office of Women’s Policy, said he was pleased to see the diversity of speakers from various ethnic and gender groups.

Feliciano pointed out the “responsibility” for men to join the fight for women’s rights and acknowledge the existence of male “privilege.” He also encouraged Asian men like himself to rethink cultural traditions.

After all, Feliciano added, “Women’s rights are human rights.”