Education
by Ramona Giwargis
Former Evergreen Valley College President Keith Aytch is pictured in this file photo. Aytch was ousted from his position due to a sexual relationship with an employee. Photo courtesy of SCECCD.

College trustees accepted Aytch’s resignation on Nov. 12, 2019, three months after placing him on administrative leave and hiring an investigator.

A public records request by San José Spotlight reveals that Aytch had a sexual relationship with another college employee, whose name was redacted from public documents, beginning in 2014 when he was the vice president of academic affairs. But after accepting the job as interim president in 2017, documents show Aytch failed to disclose the relationship, which violated the district’s policy since he supervised the employee. The relationship continued until 2019.

Aytch applied for the permanent job as president of the college in July 2018 and still did not disclose the relationship, according to records.

“You failed to disclose the relationship, even though you had no intention of breaking it off, because you knew that if the District learned of the relationship, your position as Interim President (and later, President) would be jeopardized,” wrote Jeffrey Lease, president of the San Jose-Evergreen Community College District Board of Trustees, in a September 2019 letter to Aytch and his San Francisco-based attorney outlining the district’s intent to fire him on Nov. 11, 2019.

Lease said in the letter that Aytch would not have been offered the college’s top job if the relationship had come to light.

According to Lease, Aytch violated a district board policy that prohibits sexual relationships between employees and their subordinates or students, even consensual, because it could lead to “charges of coerced submission or sexual harassment” that could damage the district’s reputation. Lease also said the relationship violated Aytch’s employment agreement.

Aytch apparently told the investigator that he did not foresee any problems by continuing the relationship. Lease said that meant the former college president either knew of the risks of dating an employee and didn’t care or engaged in “willful ignorance.”

Aytch told the investigator that he eventually cut off communication with the employee, Lease’s letter said, but added that it was too late to repair the liability and “reputational damage” to the college district.

Aytch officially resigned on Nov. 10, 2019, a month after the college trustees discussed his employment in closed session and a day before he was set to be fired. The Board of Trustees publicly accepted his resignation two days later, documents show. He did not receive a severance or other payouts. 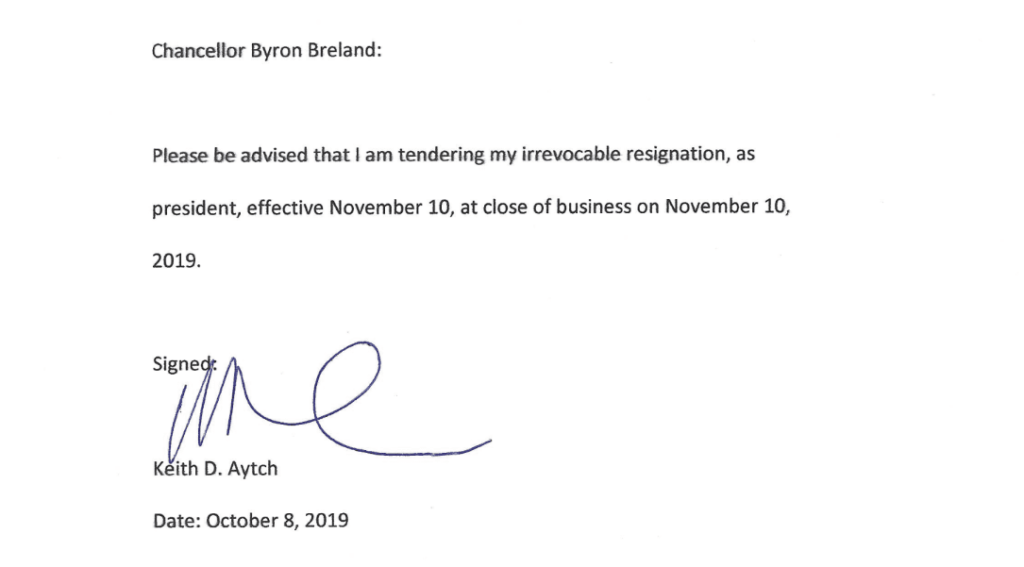 Details about Aytch’s relationship emerged after the employee filed an “informal complaint” alleging he threatened physical violence when the employee had confronted him.

The district hired Alezah Trigueros of the Law Offices of Amy Oppenheimer to investigate the matter, records show. She was paid $6,554.

But after the investigation began, the employee recanted the claims of threats. The investigation found evidence of a sexual relationship, according to a letter from district’s human resources department, but no evidence to support threats of physical harm.

“When you first reported alleged inappropriate conduct by Mr. Aytch toward you, you asserted that he threatened to kill you when you confronted him,” wrote Beatriz Chaidrez, associate vice chancellor of human resources for the San Jose-Evergreen Community College District, in a September 2019 letter to the employee. “However, during the investigation, you expressly denied that Mr. Aytch made such a threat, or that he threatened you with physical harm.”

“Based on the investigation results, the District issued a notice of intent to terminate Mr. Aytch’s appointment as President of Evergreen College for cause, consistent with the terms of his employment contract,” Brown said.

History with the district

Aytch was named Evergreen Valley College president in April 2018 after a monthslong nationwide search. He had served as interim president for a year and began his career at the college as an instructor in 1993.

His salary was $226,927 a year, according to his employment agreement. He succeeded Henry Yong, who was in the role for six years before becoming chancellor of Yosemite Community College District.

“I am thrilled to have been chosen as Evergreen Valley College’s next president and thankful to the board of trustees and Chancellor Budd for their confidence in me,” Aytch said in a news release at the time. “It will be an honor and a privilege to continue to serve in this capacity alongside my colleagues on the faculty and staff as we move the College forward in service of our students and community.”

The promotion meant Aytch and his wife could move to the South Bay after years of commuting from Elk Grove, prompting her to leave her longtime job at a Sacramento-based financial consulting firm.

It's a bittersweet moment as I announce that Elaine Combs-Aytch, my assistant for 17 years, will be leaving us as she…

After Aytch resigned under pressure as president, he was offered a faculty position at San José City College. He resigned from that position effective Jan. 28, Brown said. Aytch’s LinkedIn profile says he is now working as a higher education consultant.

Brown said the district is working to prevent similar conduct in the future by enforcing district policies and continuing to provide harassment prevention training for employees.

“The materials include awareness of inherently unequal power imbalances and multiple mechanisms for individuals to report alleged instances of harassment, discrimination, or retaliation based on any protected status,” Brown said. “The District will continue to keep up with changing laws regarding prevention, including the newest requirements to provide training for non-supervisory employees in addition to supervisors and officials. Finally, the District will continue to respond quickly and proactively to allegations of misconduct, to ensure prompt, impartial and effective fact-finding when it receives complaints.”

The college district is conducting a national search for its next president, Brown added, and hopes to have a new leader in place by July 1.