In general, using taxpayer dollars and government resources for campaign purposes is not permitted and is considered a misuse of public funds. The City Hall employees told San José Spotlight they were asked to help with campaign work on the clock.

Sometimes the work of City Hall staff may fall into an ethical gray area because it is not always easy to delineate whether a particular task qualifies as campaigning. Some of the conduct the two employees described may have fallen into this gray area but it appears other conduct crossed the line.

The employees, who were abruptly fired by Diep in July, said the councilmember hired a drove of new staffers during the election season. The employees also reported an often uncomfortable environment.

In a statement, Diep denied any wrongdoing.

“Both the state of California and the city of San Jose have high standards in place to ensure there is no mixing of government and political work,” Diep said. “I’ve upheld those high standards, no matter how much San José Spotlight may amplify the specious allegations of an anonymous accuser to confuse voters right as early voting begins.”

According to a public records request by this news organization, Diep hired nine new employees since the March 3 primary election in which he trailed opponent David Cohen. The titles of the new employees included “council assistant” and “council community relations representative.”

As of Aug. 20, his office had 12 employees — only four were employed before the primary.

“It’s been mentioned to me, but I don’t know — I have no idea what he’s using the staff for,” Jimenez said. “What I do know is that when you’re running for reelection, because you have an existing staff, you have to be very careful how you use them and what they’re doing. During normal operating hours they cannot be doing any type of extension of the campaign with taxpayer money.”

Mingling official resources and staff time with political campaigns is against the law. Silicon Valley Rep. Mike Honda lost his re-election bid and became the subject of a drawn-out House ethics investigation in 2015 after he was accused of using government resources to benefit his campaign.

‘If you don’t knock, you won’t be around’

This summer, three people departed Diep’s office in less than two weeks. One council assistant left the job in June after just one day on the job, according to records obtained by this news organization. The two other employees said they were abruptly fired.

One of the employees told San José Spotlight she was hired for a communications position but a couple months into the job, she said Diep asked her to knock on doors during the workday and after hours.

She said she was not sure what she would have been instructed to say while knocking on doors had she agreed to do so.

“I wouldn’t canvas for him,” the employee said. “People around the office said if you don’t knock for him, you won’t be around.”

In order to succeed, the employee explained, staffers needed to help with the campaign. She said she ended up creating postcards with his reelection logo during office hours. 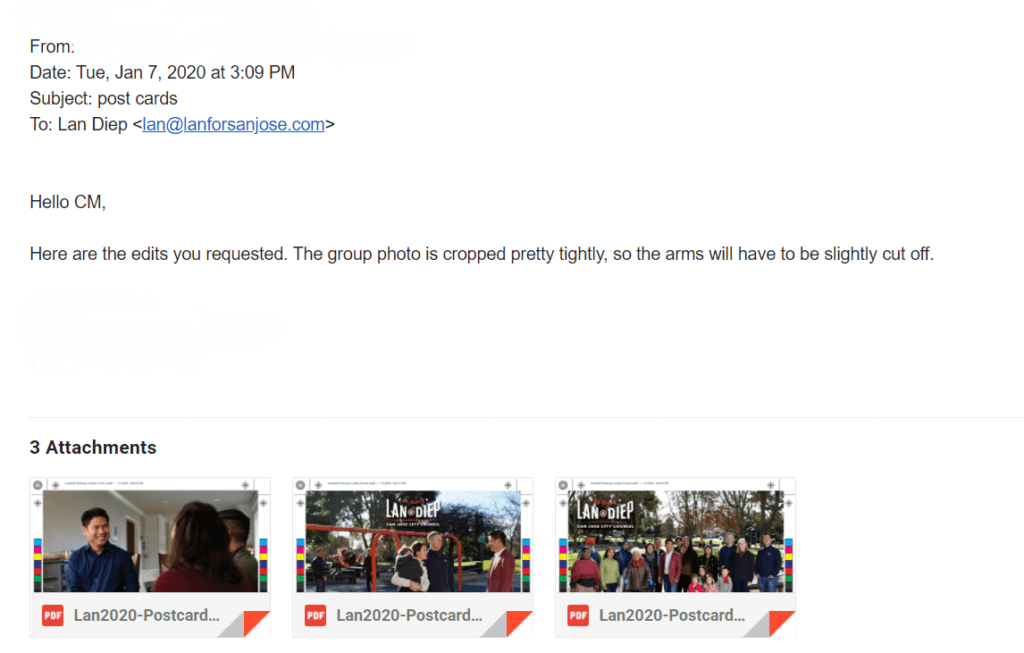 In an interview with San José Spotlight, a third employee recalled feeling pressured to knock on doors. The employee ended up knocking on doors after hours to discuss Diep’s re-election.

The other employee who was fired in July said Diep consistently asked staffers to make scripted “thinly-veiled campaign calls” in addition to going door to door.

She said staff members made calls to District 4 residents using contact information from a campaign database under the guise of asking about the coronavirus and relief efforts. But they were given scripts which required them to state Diep’s name three times per call — a common campaign tactic.

“He calls them COVID check-ins,” she said. The employee said callers couldn’t be asked directly if they backed Diep, but after the call, the employees were asked to rank callers’ level of support for Diep on a scale of 1-5. “We would use his campaign PDI (Political Data, Inc.) data. This happened during office hours.”

PDI is a private company that provides voter data to political campaigns to do voter outreach.

One of the employees added that Diep asked office staff to contribute to his campaign, attend fundraisers and send money via private Venmo payment. 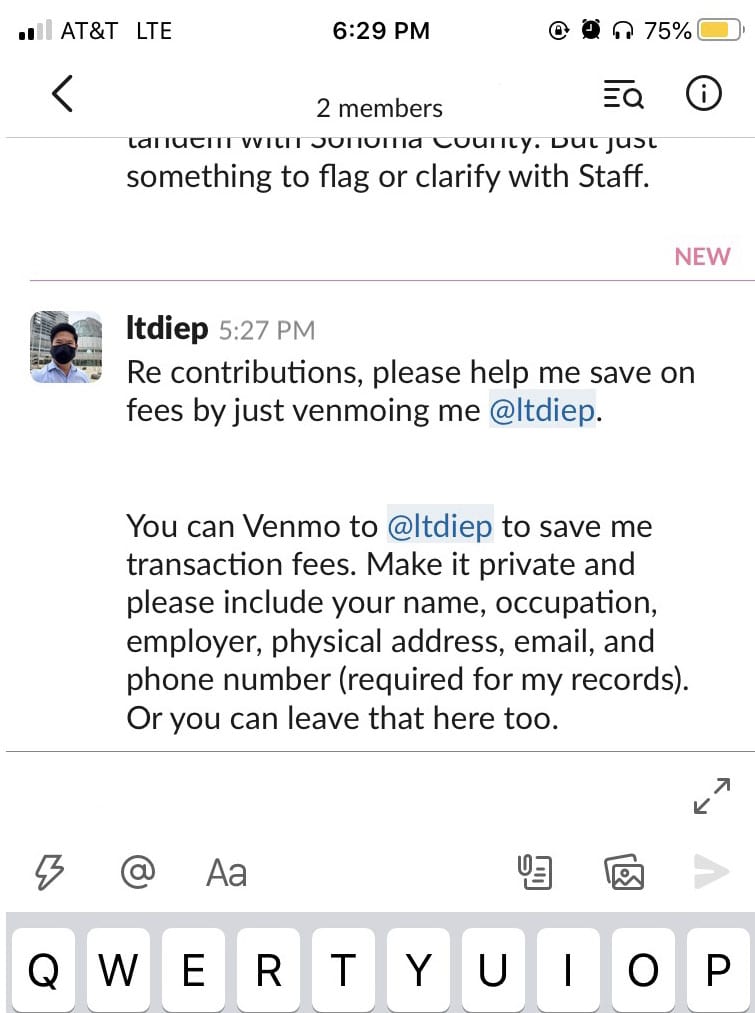 On June 18, 2020 Diep directly messaged her over Slack saying, “Re contributions, please help me save on fees by just venmoing me @ltdiep.” He also encouraged her to make the contribution private.

She said she neither donated nor ever intended to donate. 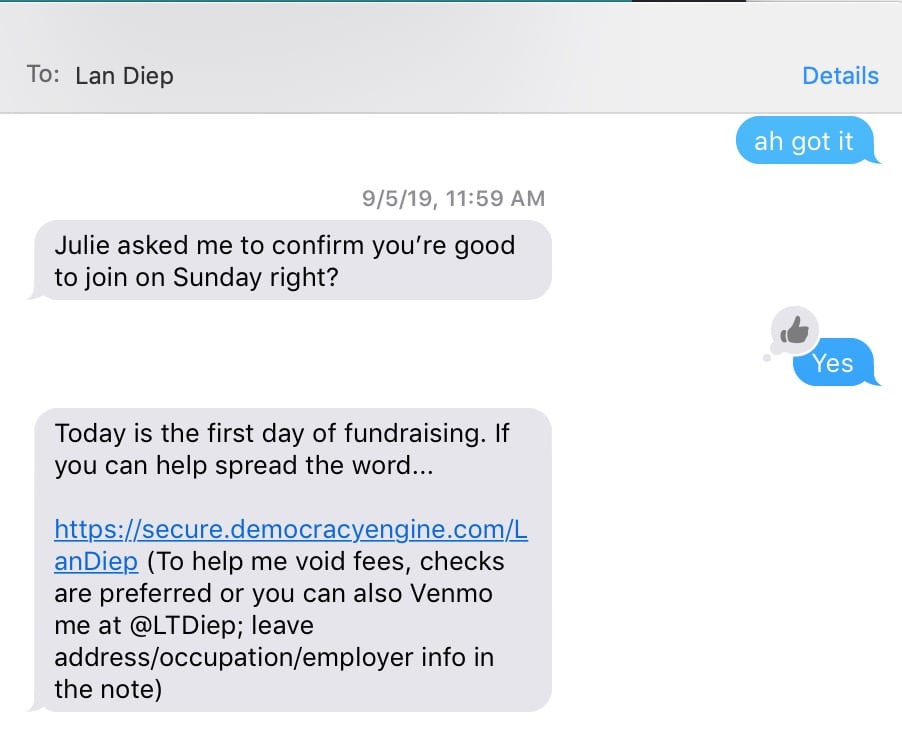 Referring to the practice in general of using office resources for campaigning and not specifically to Diep, an ethics expert said “it’s wildly inappropriate.”

“There’s a reason that this is illegal. Our representatives are supposed to use public resources to represent us — not to represent their political aspirations,” said Jessica Levinson, a professor at Loyola Law School and former president of the Los Angeles Ethics Commission. “The most scarce and important resource is taxpayer resources. And the taxpayers pay these staffers…  it really is a misuse of public funds to make them work on a political campaign.”

According to California code, a candidate for elected office should not directly or indirectly ask for political contributions from employees. Employees, however, can be asked to contribute via mass messaging that happens to include them.

‘I never received a straight answer’

The two employees say they were among a group of at least three workers who received a call from Diep on July 6 informing them they needed to “work on an exit strategy,” though he told them they were not being fired at that time.

Three months after coming in second in the March primary, Diep reportedly said he was disbanding his policy team. Later that week, the two employees told San José Spotlight the councilmember had hired new staffers to work on policy.

Confused by the status of their employment, both employees contacted city administrators to inquire about next steps and sent Diep emails two days later seeking answers.

According to a July 8 email from the first employee, Diep told her he wanted her gone before mandatory pay raises took effect.

“This vagueness had left me wondering if I have been let go, and if so, when will I no longer be working in the office,” she wrote in the email. “If you are letting me go I should be given an official notice and that notice should make clear the reasons for my termination and the status of my benefits.” 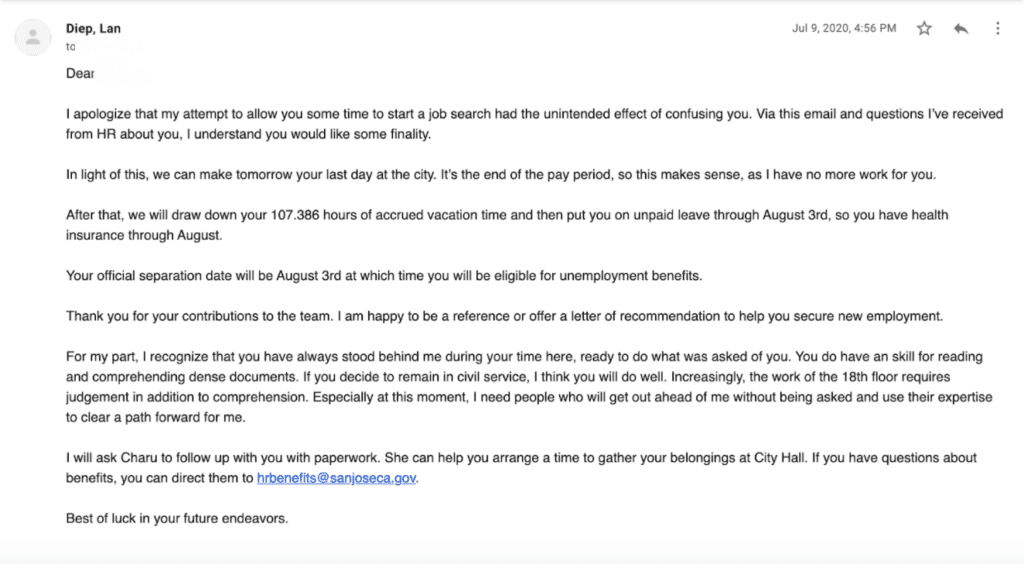 Diep replied the next day, confirming that he knew she had contacted human resources.

“Especially at this moment, I need people who will get out ahead of me without being asked and use their expertise to clear a path forward for me,” he wrote.

The second employee asked Diep for a reason for her termination so she could file for unemployment and apply for emergency health benefits.

“I was left under the impression that I was being let go, but I never received a straight answer when I asked if I was being fired or laid off,” she wrote. 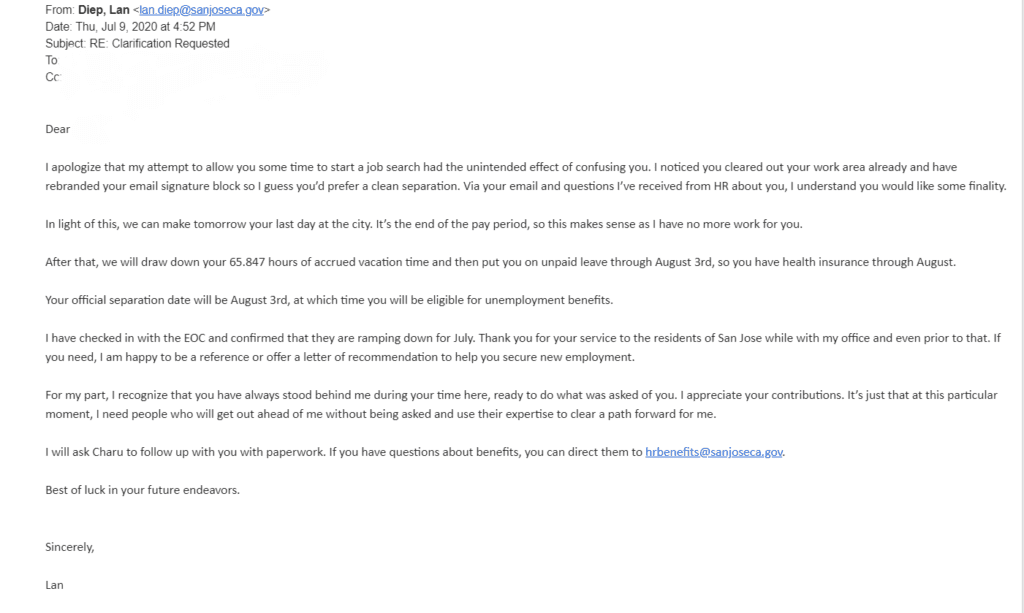 Diep wrote an almost identical reply to her, again stating he knew she spoke to HR.

Neither of the two employees have heard back from HR or OER about their concerns.

It’s unclear what recourse the employees would have if they wanted to pursue their concerns more aggressively.

When it comes to filing complaints against elected officials — who can’t be fired or disciplined like city employees — the process isn’t as clear cut.

City Attorney Nora Frimann said depending on the severity of the complaint, the office will reach out to the councilmember directly for a discussion or will hire a private investigator to look into the matter.

“I’ve been in office for close to four years and I have yet to lose one staff member,” Jimenez told San José Spotlight. “What I simply pointed out is that Lan in the District 4 office has had people popping in and out of that office for some time. What I’ve heard from David Cohen and other people that I know in the district is they feel that maybe the office hasn’t been as effectively used as it should be.”

But some elected leaders defended Diep against the allegations.

Councilmember Johnny Khamis said he hasn’t heard anything about Diep’s alleged use of city employees and resources to support his campaign. Diep will inevitably have enemies due to election season, added Khamis.

“A lot of people are out to get him, that’s for sure,” Khamis said. “ I don’t know the credibility of the people making these accusations.”

The political battle lines are drawn even on the San Jose City Council.