Hope Village, the homeless encampment of about 16 people situated off Ruff Drive, will not be moved to Willow Glen anytime soon.

The relocation was put on hold Monday by the Santa Clara Valley Water District, following intense scrutiny from residents in the neighborhood.

Many in the crowded room of impassioned residents brought signs opposing and supporting the project. The majority in the audience cheered upon hearing the news — a blow to the small Hope Village community that was hoping for the relocation to pass after they were booted from their current site. And the clock is ticking: They have until March 30 to move.

The suggested proposal to relocate to Willow and Lelong Streets — initially suggested by Davis — came a little less than a week ago to the surprise of many residents, who feared that their neighborhood would become less safe and that the project would bring more trash and crime. 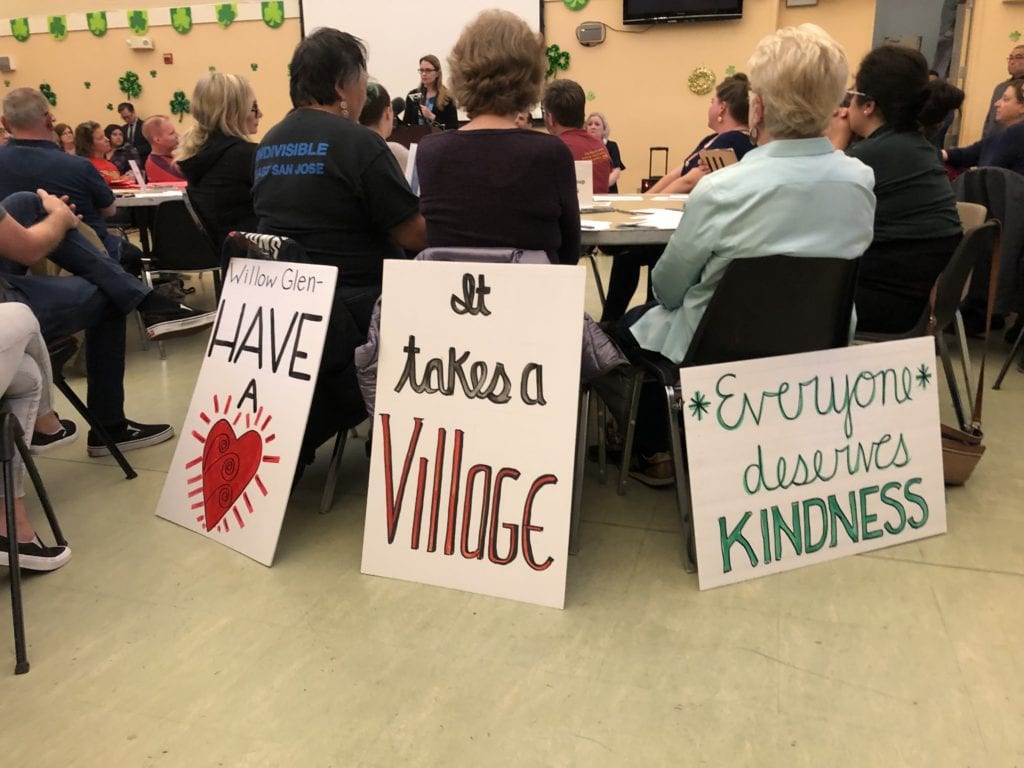 The current Hope Village location provides shelter, food, showers and bathrooms to a small group of mostly women, including an Amazon worker who can’t afford to make ends meet. The relocation to Willow Glen would’ve included a plan to replace the tents with “tiny homes” that include bathrooms and kitchens.

“We need to continue to have really difficult conversations in this city,” said Mayor Sam Liccardo. “There are many homeless in our creeks, our parks, in the stores that we shop at — they are in all of our neighborhoods. We’re finding overwhelmingly they were here originally.”

Liccardo added that nearly 90 percent of the homeless residents lived in San Jose or the county before being pushed out onto the streets.

“Whether we want to believe it or not, they’re our community members,” added Liccardo. “I believe strongly that we can do this differently and have a better conversation and ensure that we are addressing the concern people have about safety in our communities.”

Longtime Willow Glen resident Kathleen Almoslino said the plan to move Hope Village to her neighborhood was “not well thought out.”

“People need to go back to the drawing board,” she said. “Hopefully this means that it brings attention to what’s happening with the huge homeless population that’s congregated, and hopefully our district councilmember will be more involved with her constituents.”

Almoslino claimed that city officials were making plans on the relocation project since January, but that no one was told. The surprise, she added, was why so many people were against it.

“These are difficult situations and whether it’s affordable housing or it’s a temporary situation like this, at the end of the day, people are very concerned about their neighborhood,” said former District 6 Councilmember Pierluigi Oliverio. “I wouldn’t say anything that the mayor didn’t say.”

San Jose council members will mull the relocation again on March 26. Another community meeting Wednesday to discuss potential new sites has been canceled.