San JoseTransportation
by Carly Wipf
Lawmakers are considering a plan that would make East San Jose safer for bicyclists and pedestrians. File photo.

A new plan seeks to transform East San Jose into a pedestrian-friendly transit haven by reducing the need for cars and connecting residents across the city.

The En Movimiento — Spanish for “In Movement” — plan proposes an expanded network of sidewalks, bike lanes and bus lanes alongside a Bay Area Rapid Transit (BART) line, giving East Side residents an array of options for car-less travel.

The plan, created by the city, will be presented to the San Jose City Council this Tuesday.

“We know this is a very auto-centric city and without really taking away anything, we are offering people new ways to get around, which is exciting,” said Peter Rice, the project’s manager. “Especially for people who can’t drive — the elderly and children — we’re offering safe alternatives for them.”

East Side residents have long called for faster, safer and more reliable transportation modes to connect to downtown.

The En Movimiento plan includes an East to West Bus Rapid Transit connection and bike connection to the Diridon Station area, which is expected to become downtown’s major travel hub and the site of Google’s mega-campus. The plan also aims to install “San Francisco-style” bus and emergency lanes, which will separate public transportation from cars and could reduce travel times.

Santa Clara Street and Alum Rock Avenue currently create a major East-West thoroughfare, but the roadway has up to six lanes of traffic with no bike lanes. East San Jose is also divided by two highways, which can make cycling and walking both difficult and unsafe.

Community groups including SOMOS Mayfair and Vietnamese Voluntary Foundation helped advocate for the plan which would resolve key safety concerns.

In a memo, Councilmemembers Raul Peralez and Magdalena Carrasco said when it comes to land use and transportation planning, East San Jose has historically suffered inequities.

“Amenities such as an interconnected safe and robust bike network, improved transit infrastructure and world-class pedestrian facilities have often been an afterthought and lacking cohesion,” the lawmakers wrote in a memo. “Families choosing alternate modes should be able to traverse through their neighborhood safely, whether on bike, foot or bus.”


Cyclist and pedestrian protection from traffic will become even more critical when the proposed 28th Street/Little Portugal BART station in East San Jose is completed by 2030. 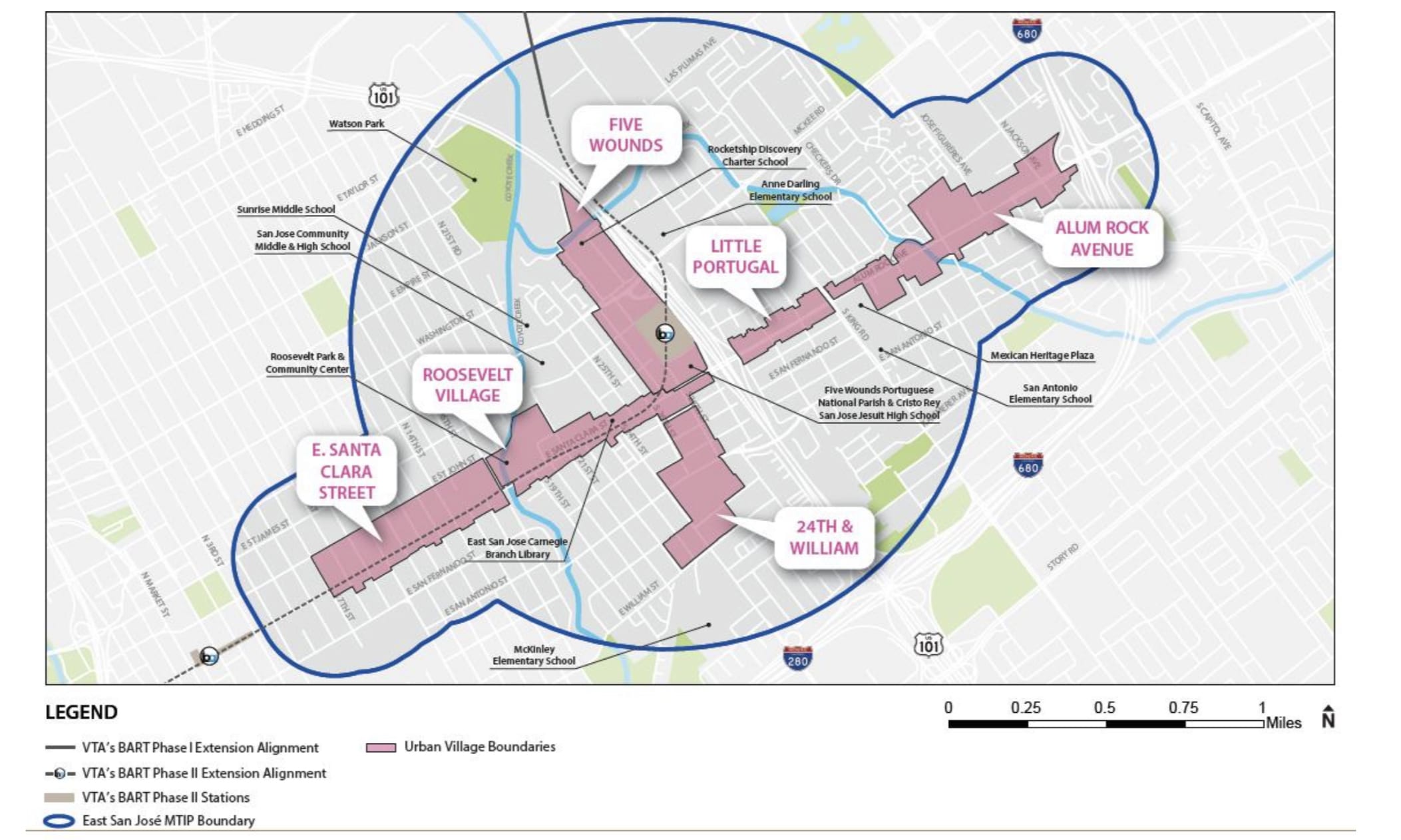 A map of East San Jose’s urban villages and proposed BART line. Photo courtesy of the city of San Jose.

New and extended pathways will connect foot and bike traffic to the BART station. Bike lanes on E. St. John Street — just north of the E. Santa Clara Street thoroughfare — will allow cyclists to ride all the way to downtown without getting caught in traffic. The plan also envisions a new bike and pedestrian bridge over Coyote Creek between St. John St. and Roosevelt Park.

According to a city report, residents supported more bike and pedestrian paths to cross Coyote Creek and Highway 101. The city recently secured a grant to widen E. Santa Clara Street bridge over Coyote Creek. But the plan goes further to widen sidewalks, build medians and create curb bulb-outs to protect people from cars. 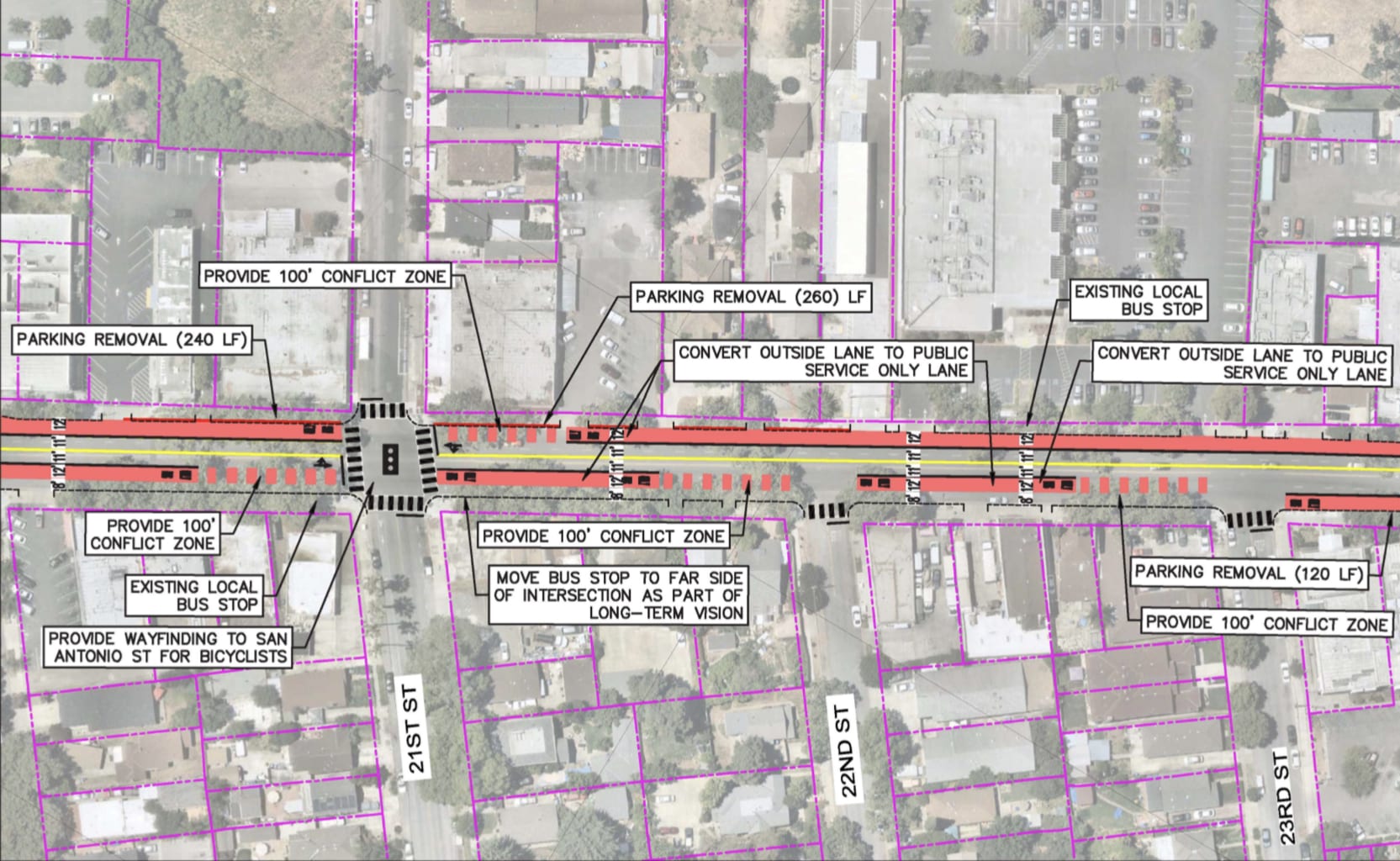 A digital rendering of changes to E. Santa Clara Street. Photo courtesy of the city of San Jose.

“This is a plan about getting the neighborhood the benefits of transportation.” Madou said. “We are also trying to move the needle toward making the area more attractive.”

Between 2013 to 2018 San Jose designated six locations as urban villages along the E. Santa Clara/Alum Rock corridor. The En Movimiento plan was drafted to support growth and safety in these urban villages. It also supports the city’s goal of reducing San Jose’s driving rate to 40% by 2040, according to a memo from Transportation Director John Ristow.

Funding for the project, according to Madou, will come from the city’s pavement program and state, federal and regional grants. BART and developers who move in will also foot some of the bill.

“The En Movimiento plan is a welcome step in finally rectifying the historic errors imposed on this community and leveraging the future BART station to thoughtfully bring forward long awaited transportation improvements to our neighborhoods,” Peralez and Carrasco said.