San Jose
by Katie Lauer
Leslie Williams, 32, volunteered to bell ring during the Salvation Army's Red Kettle campaign at a Raley's in Sacramento Friday. She said most people didn't know about the new options to donate through Apple and Google Pay. Photo by Katie Lauer.

Red kettles and ringing bells are a familiar scene during the holidays, but now there’s new ways to give during the Salvation Army’s annual fundraising campaign — and it’s perfect for techy Silicon Valley.

Shoppers across the nation now have the ability to donate electronically through Apple and Google Pay, a first for the longtime nonprofit organization. Since many people don’t carry cash anymore, the charity hopes this new option will tackle that hurdle and bring in more donations, which fund homeless shelters and provide meals for those in need.

“Being in Silicon Valley, we’re at the epicenter of technology. I think this is one small way to tap into that,” said Maj. Roy Wild, who oversees Salvation Army operations in Santa Clara County. “I think we need to continue to look at innovative ways to connect with donors.”

This isn’t the first time the Salvation Army has tried to combat the decline of cash in pockets, whether through texts messages, online sites or credit cards. But organizers are hoping this latest electronic method proves even more successful, as it’s not only faster but more people are using phone-based payments in their daily lives.

“We’re going to see if it connects,” Wild said. “Recognizing that our donor base is ever changing, the demographics are keeping up with that technology, so this is that first step in the right direction.”

But as Black Friday shoppers perused Westfield Valley Fair in San Jose, it was a mixed bag of interest.

“I’m not really into payment processing apps,” said Shefki Kraja, 42, a San Jose resident. “I don’t think the older generations would be into it, but maybe the younger generation would try it.”

“I think it would be faster and more efficient in today’s society,” said Guppi Uppal, 17, of Sunnyvale. “I think it’s the next step for nonprofits, and you can add any amount.”

When shoppers find the kettles, all they have to do is scan the electronic tag attached to each stand. There’s also a QR code for phones that aren’t set up through Apple or Google Pay. The dozens of kettles spread across San Jose and Santa Clara are usually manned with volunteers from 11 a.m. to 7 p.m., and the campaign collects around 70 to 80 percent of the organization’s income for the year.

Wild won’t know how this new system will affect revenue until early next year, but he’s optimistic, especially as the number of local homeless residents – one of the Salvation Army’s main client bases – continues to grow.

However, the Apple and Google Pay expansion comes at a time when the Salvation Army’s reputation has been the subject of criticism alleging the organization is anti-LGBTQ.

Chick-fil-A announced earlier this month it would no longer donate to the Salvation Army, which received $115,000 in 2018. While many news outlets reported the stoppage of funding was connected to anti-LGBTQ issues, more than 80 other organizations without any religious affiliation or anti-LGBTQ record will also lose out on Chick-fil-A donations in 2020.

The Salvation Army has released statements and op-eds refuting those assertions. While he hasn’t received any backlash locally, Wild said the perception of prejudice or bias is simply wrong. 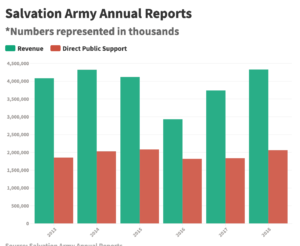 Revenues haven’t shown much change despite the backlash. Annual financial reports from from 2013 to 2018 for all six separate Salvation Army corporations show revenue has consistently averaged nearly $4 billion. The amount of direct public support dollars has also remained steady, floating around $2 billion, and the Red Kettle Campaign alone has raised nearly $150 million in past years.

Of those funds, Wild said an average of 82 cents of every dollar goes back to helping clients. If donors have lingering concerns about who will benefit from their services, including those in the LGBTQ community, he said it’s a great opportunity to get involved to find out.