Housing
by Katie Lauer
From left, Jimmy Hendrix and Gerald Reynolds were two of the first tenants to move into Villas on the Park, an 83-unit apartment complex dedicated to housing San Jose's most vulnerable homeless residents. Photo by Katie Lauer.

Jimmy Hendrix, who’s been homeless on-and-off for the last 40 years, was recently diagnosed with emphysema and COPD and had nearly given up on finding a safe place to lay his head.

But on Friday, Hendrix became the first resident to move into Villas on the Park, one of San Jose’s first permanent supportive housing developments in the heart of downtown. His furnished apartment is still somewhat bare, but he started making the space his own with the basics: a TV and coffee maker.

The studio apartment has become a safe haven for the 56-year-old who fell into a lifestyle of addiction.

“This place is a lot of relief,” Hendrix said. “It’s easier to take care of yourself when you’re inside.”

After several years of construction, the 83-unit complex dedicated entirely to housing formerly homeless residents, located at 280 N. Second St. near St. James Park, finally opened its doors this week. The $37 million project was primarily funded by the city of San Jose and revenue from Measure A, a $950 million affordable housing bond approved by voters in 2016.

Villas on the Park, which was developed by Affirmed Housing and nonprofit PATH San Jose, has been a project four years in the making. PATH spokeswoman Megan Colvard said eight people have moved in so far, and she was thrilled to see the first few tenants settling in over the weekend.

“I don’t think there’s anything that could be more exciting and delightful,” Colvard said. “I think for people who are committed to ending homelessness – the county, the city, the Housing Authority – we’ve been waiting for this day for years. I think it’s a momentous event, and I think that it’s really a sign that progress is happening.”

Hendrix was chosen to live at the complex through a referral from Santa Clara County after trying to find housing for more than a year. Now recently diagnosed with several respiratory disorders, he’s using his new apartment to get better – physically, mentally and emotionally.

Taking a look inside the 6-story building, there are multiple community rooms, a lounge, rooftop patio, edible community garden, computer lab, therapy space and small meeting rooms. All residents will have a transit pass and access to the complex’s bike sharing program.

Colvard said the apartment building’s high quality construction, floor plan and amenities help reinforce a sense of dignity and value for the residents. 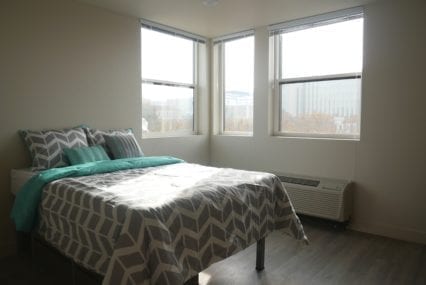 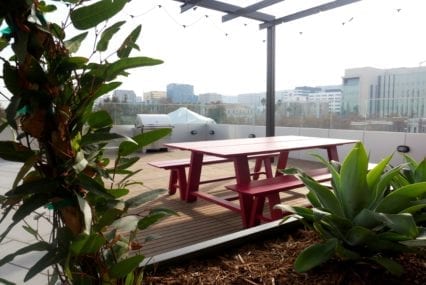 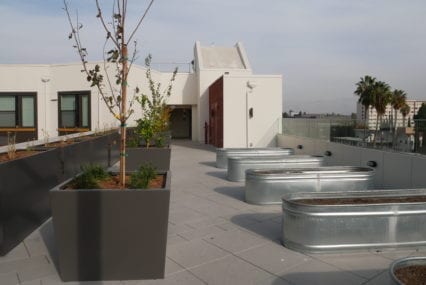 A community garden of edible fruits and vegetables is on the roof for residents to grow and maintain. Photo by Katie Lauer. 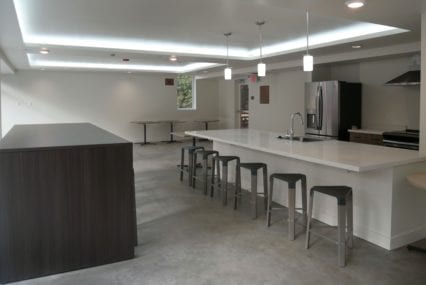 One of many community rooms at Villas on the Park, TVs and couches still have to be moved in. Photo by Katie Lauer. 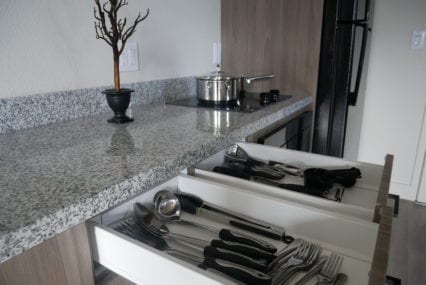 Pots, pans and utensils are among the amenities that are included in the 83 studio apartments at Villas on the Park. Photo by Katie Lauer. 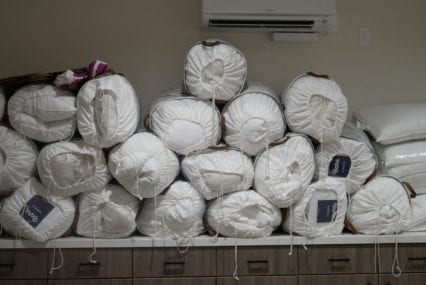 According to a count earlier this year, there are nearly 6,200 homeless people living in San Jose and more than 9,700 across the county. Since the apartment complex will house some of the most vulnerable residents, Colvard said its onsite wraparound services, such as case management and specialty mental health care, are critical to supporting their stability.

Living indoors is a new reality for Hendrix, but if he needs support, his friend from the streets Gerald Reynolds is a neighbor inside the complex.

Reynolds and Hendrix both see the opportunity as a way to get back on their feet.

“I have to take it as a helping hand. This program is a blessing,” Reynolds told San José Spotlight. “It’s hard for me to take it in now, and it’s hard leaving the people you’re struggling with – you’re not really leaving them, but they’re like a family.”

The 41-year-old said landing an apartment at Villas on the Park was a “luck of the draw.” Living between Morgan Hill and San Jose, he said an outreach team signed him up for services while the encampment he was in near Little Orchard was being dismantled three months ago. He got help securing an ID, social security card and filing housing paperwork.

Reynolds is still working on furnishing his new place, having left everything he owned back in his encampment. But Colvard said partners such as Destination: Home, Pure Storage and Cisco have helped turn the empty apartments into cozy homes.

“Thanks to our private sector partners, we were able to purchase the basic essentials to make sure that each individual in their new apartment has pots, pans, sheets, pillows, shower curtains, towels – everything that you might need to cook your first meal or spend the night in your bed,” Colvard said.

While living in downtown, Hendrix tries to avoid the environment that fueled his drug use and past lifestyle, so having transit available outside the building, he said, helps him escape temptations and spend time in other parts of San Jose.

While grateful for the opportunity, he knows the apartment is just a first step in getting his life back together. “This is not going to fix all my problems,” Hendrix said. “Having a place to live doesn’t mean everything’s fixed. It’s a support system.”

Colvard said PATH is still receiving referrals through the county to fill the remaining studio apartments before the complex’s grand opening in March.