Magdalena Carrasco, the dynamic lawmaker who broke the mold as San Jose’s vice mayor, is running for county supervisor in what’s shaping up to be a crowded field of high-profile candidates.

“This feels like a very natural step for me,” Carrasco said in an interview Monday. “It really feels like the next step in the evolution of my career and serving families. This is probably the most important job in the region – serving the folks in Santa Clara County. It’s one of the largest counties in the area and it’s the last safety net that we have for the most vulnerable people.”

Carrasco, who was elected to the San Jose City Council in 2014 after serving on the East Side Union High School District, quickly staked a position as an independent voice on a council often divided by two factions — business and labor. Carrasco served two years as Mayor Sam Liccardo’s vice mayor, the first representative from the East Side in three decades, but maintained her independence by openly opposing the mayor on a number of critical issues.

Prior to joining the City Council, Carrasco worked as a family and child advocate at the nonprofit First 5 Santa Clara, focusing on early childhood development, helping families in the foster care system and those experiencing domestic violence.

The East Side councilwoman led on issues of minimum wage, women’s rights, rent control and affordable housing. She hopes to bring that experience to the five-member Board of Supervisors. Political insiders consider her a formidable front-runner because of her current time in office and hefty financial backing from her ex-partner, former Senate leader Kevin de León, who could tap into Sacramento PACs and major donors. 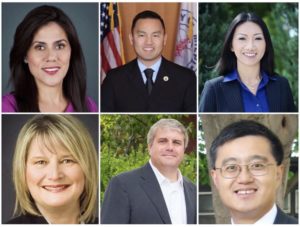 Tran, who in 2016 became Milipitas’ first Vietnamese mayor and the youngest in Silicon Valley, was the first to jump into the county race. The former social worker and Air National Guard member called it a “once-in-a-decade opportunity.”

‘I’m going to give my heart and soul to winning this race so I can be a part of a special movement happening at the county level, particularly with addressing our homeless situation,” said Tran, who, if elected, would be the first Vietnamese county supervisor. “I’d like to see the best person win this race and I think it’s going to be me.”

Tran, who took Silicon Valley politics by storm by defeating establishment candidates despite no political experience, might have to fend off a contender who paved the way for him — Nguyen. She swore Tran in when he won the mayor’s seat in Milpitas.

Nguyen, who serves as executive vice president of the SVO, the area’s chamber of commerce, told San José Spotlight that she’s “still thinking about it” and hasn’t ruled out a run for supervisor. If she jumps in, Nguyen would likely garner support from business groups eager to win a seat that’s long been controlled by labor interests.

Another potential candidate, Herrera, could also draw backing from the powerful business lobby. Herrera, who served eight years on the San Jose City Council, said Sunday that she’s been meeting with advisors and weighing her options. Herrera said she wants to focus on improving mental health and transportation services.

“I’m not running for a particular political power or to shake up the power base,” Herrera said. “I’m running because I want to represent the constituents — the people in the district — not a particular interest group or corporations.”

Griffith, another maverick lawmaker, said he’s trying to figure out if a Sunnyvale candidate could be viable. Despite being the second largest city in Santa Clara County, a Sunnyvale lawmaker hasn’t represented the district in decades.

Griffith believes that Sunnyvale should have a seat at the table. The former mayor said he stands out from the pack because he’s successfully led regional efforts, including raising minimum wage in cities across the county.

“Most of the other candidates in the race had no part in that or openly opposed it,” Griffith said. “I simply point to the fact that this is a position who needs people who can get things done on a regional level. Of the people on the list, there are very few who can make that claim and I’m one of them.”

Lee, a patent attorney who also served on the Sunnyvale City Council, including a stint as mayor, said he’s running because “too many residents are struggling” and the county is the first place they go for help.

“The Board of Supervisors is a hub for policy and deep dives into community solutions,” Lee said. “My friends know me as a problem solver that loves to learn as much as I can about an issue, and be a consensus builder to find a solution.”

Despite the crowded field, Carrasco said she isn’t worried about the competition.

“I appreciate every person that’s jumping in,” Carrasco said. “But I feel very confident. I think the work that I’ve done at the City Council and my personal experience before getting on council has really prepared me for this.

The supervisorial election is only a year away — March 2020 — because of the state’s earlier presidential primary. District 3 spans north San Jose, Alviso, the Evergreen area, all of Milpitas and the northern half of Sunnyvale.