Business
by Janice Bitters
The Pruneyard mixed-use complex in Campbell is seen in this file photo.

The retail portion of Campbell’s newly renovated Pruneyard shopping center has traded hands for $212.5 million, according to an announcement Monday by buyer Regency Centers Corp.

The purchase by the Jacksonville, Florida-based retail investor and developer marks the sale of the third and final portion of the mixed-use center since the start of the year as renovations wrap up on the property and new retailers settle into the complex.

San Francisco-based Ellis Partners and New York-based Fortress Investment Group have sold off major stakes in the office, hotel and now the retail portion of the sprawling complex in separate transactions. The pair acquired the development in 2014 and have made hefty investments into rehabbing the aging complex, which hadn’t been updated in decades before the approximately $280 million purchase.

Ellis Partners will stay on as a minority owner and operator of the office and retail parts of the complex.

“We are pleased to collaborate with the Regency team as the vision for The Pruneyard is approaching full realization,” Jim Ellis, managing principal for Ellis Partners, said in a statement Monday.

The deal announced this week for the 258,000-square-foot retail portion of the development, which includes about 17 restaurants and 23 retailers, works out to $823.64 per square foot for the majority stake that Regency now owns. 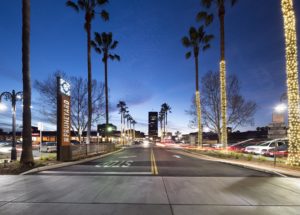 In March, Santa Barbara-based Somera Capital Management and Los Angeles-based Tyler Development Corp. bought the DoubleTree by Hilton hotel in the development for $59.1 million. Ellis Partners won’t retain control of the hotel portion of the property, but company leaders have assured that the 169-room hotel isn’t slated for redevelopment or major changes.

That deal came about a month after investment firm Oaktree Capital Management bought a majority stake in the three-building, 365,000-square-foot office portion of the property for an undisclosed price. The Los Angeles-based investor also purchased the land where a fourth planned office building spanning about 100,000 square feet in size is slated to rise.

Regency Centers Corp., meanwhile, owns more than 400 properties around the country, five of which are located in the South Bay, according to the company’s online portfolio.

Among the company’s Silicon Valley properties is Blossom Valley in Mountain View, Mariposa Shopping Center in Santa Clara, Shoppes at Homestead in Sunnyvale and Snell & Branham Plaza in San Jose.

The Pruneyard is the type of property that “doesn’t come along very often,” said Craig Ramey, Regency Centers’ managing director of the Pacific Northwest, Colorado and Northern California.

“We’re aware of the rich history of this center. This, coupled with a strong merchandising mix and terrific amenities, aligns very closely with the types of properties already in our portfolio,” he said in a statement Monday. “We want to ensure that The Pruneyard continues to build on its recognized position as a premier retail destination in Silicon Valley.”