San Jose
by Carly Wipf
"Obama" by dcblog is licensed under CC BY-ND 2.0

The plan has been more than three years in the making.

Community leader Alex Shoor Shoor started the movement to create Barack Obama Blvd. in San Jose in 2017 with an online petition that received more than 2,800 signatures. His effort raised more than $9,000 for application fees and implementation.

“It’s a message to every person in San Jose no matter who they are or where they come from that they too can achieve their dreams,” Shoor said during the council meeting. 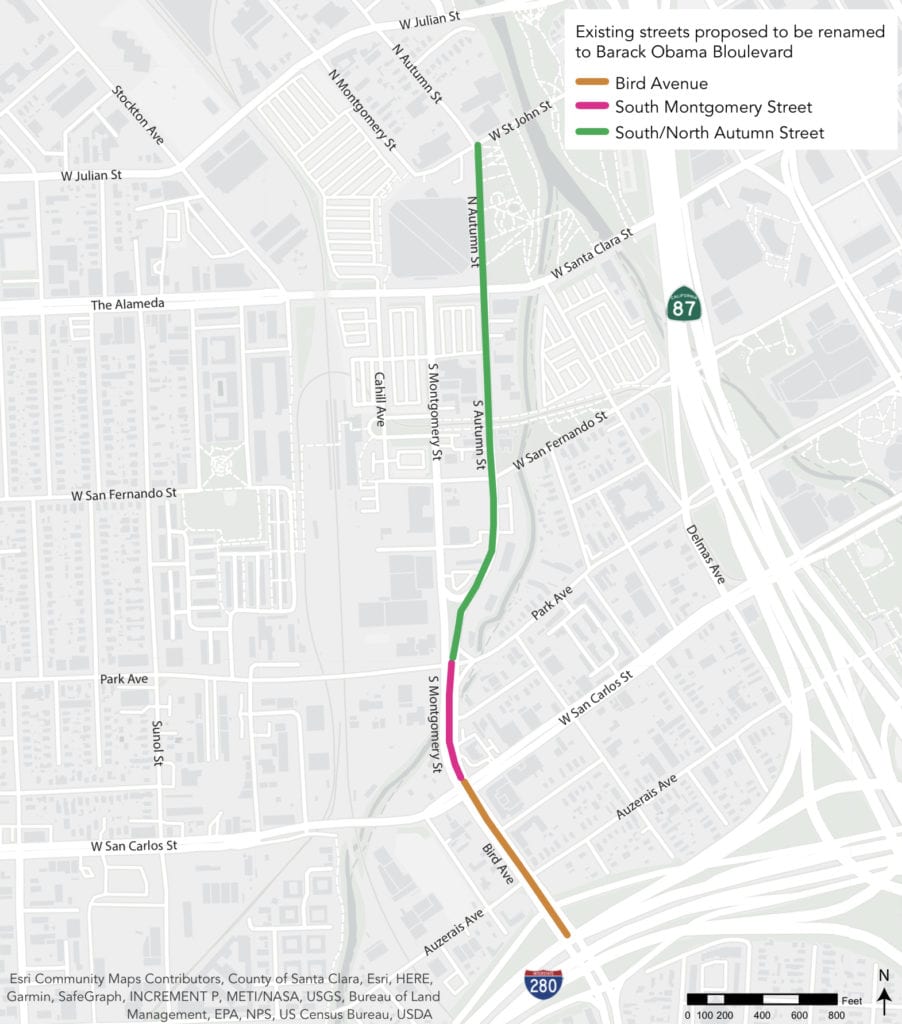 Shoor said he was inspired by the popular Democratic president while campaigning for him in 2008. He said he saw the impact Obama had on children of color who saw themselves in the country’s future leader.

Vice Mayor Chappie Jones, who is Black, reflected on the election night when Obama was first elected.

“I remember looking at my wife and my family, and just having the sense of just so much pride and hope of what was accomplished that night,” Jones said.  “We’ve gone through a dark, four year period and even through all of that, that hope, those dreams, those aspirations that Barack Obama represented, are still alive.”

The leaders said the new stretch of road will serve as a gateway to welcome visitors into the diverse and vibrant city.

Former Sen. Jim Beall was among the initiative’ s supporters. He joined forces with Bill Melson, Hellen Sims, Joe Bass and Shoor to make up the Barack Obama Boulevard Committee. The committee will be responsible for all costs related to new street and highway signs.

The renaming plan was even embraced by Shane Patrick Connolly, chair of the Santa Clara County Republican Party. According to a memo by city Planning Director Rosalynn Hughey, the city received more than 70 letters from the public — the majority of which supported the new street name.

But the process faced a number of obstacles. San Jose’s strict approval process for major street renamings required written approval from half the affected property owners. The stringent rules allowed Milpitas and Los Angeles— cities that started petitions for a Barack Obama Blvd after San Jose — to approve their streets first.

Since the new San Jose street chosen for naming is considered a minor, the stringent approval process no longer applies.

Only portions of existing streets are being renamed after Obama to preserve historic references to T.S. Montgomery and Calvert T. Bird, according to Liccardo and Jones.

Some San Jose residents said they’re concerned the street choice catered to developers such as Google. The street is in close proximity to the tech giant’s proposed 80-acre megacampus near Diridon Station.

“It’s offensive for Barack Obama’s name to be associated with the most redlined, restricted, coveted areas in this city,” Paul Soto said. “This is the kind of stuff that Google wants to use to sanitize its reputation by having on all of its letterheads the word association between Barack Obama and Google.”

Shoor insisted the street location had nothing to do with Google. It was chosen based on its proximity to major San Jose landmarks, he said, such as SAP Center. It also intersects with Santa Clara Street — one of the city’s major thoroughfares.

“Barack Obama is a man who points to the future of this country and gives it a lot of hope and possibility,” Shoor said.