BlogSanta Clara
by Ramona Giwargis
The Santa Clara Police Department is pictured in this file photo.

With a hefty donation from a developer building a massive project in the city, Santa Clara’s police union is funding campaign mailers supporting a slate of City Council candidates backed by Mayor Lisa Gillmor. 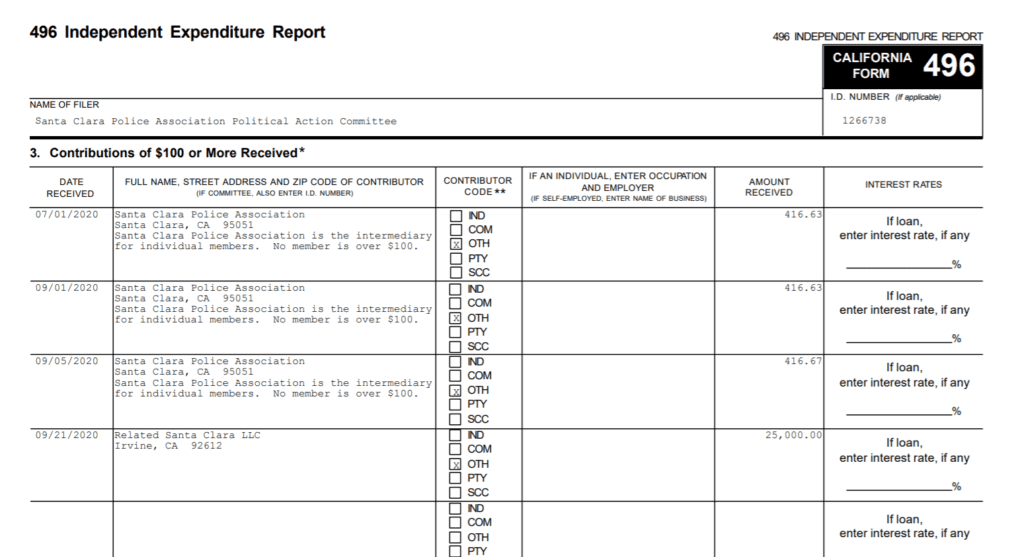 The Related Company’s donation on Sept. 21 to the police union’s PAC helped fund a website and nearly identical campaign mailers to support Watanabe, O’Neill, O’Keefe and Mezzetti. The mailers state the candidates will provide leadership through the COVID-19 crisis and “keep Santa Clara together.”

The mailers also boast the support of the police and fire unions, along with a photo and quote from Gillmor.

All the candidates supported by the police union’s mailers are white, a point of contention in a city that’s seen a startling lack of diversity on its council.

Santa Clara recently faced a costly California Voting Rights Act lawsuit — and appeal — over its at-large voting system, which forced it to hold district elections. The district elections led to the first person of color being elected, Councilmember Raj Chahal.

“It’s expected that this would happen,” said Richard Konda, executive director of the Asian Law Alliance, which brought the lawsuit against the city. “My understanding is the mayor has a strong relationship with that police officers’ PAC and that’s what they have done in the past.”

Rev. Jeff Moore, president of San Jose/Silicon Valley NAACP, said the police union supporting a slate of white candidates backed by the mayor exacerbates racial divides in the Mission City and among its law enforcement.

“To see them support an all-white field of candidates continues to reinforce that racist side of the Santa Clara Police Department. Santa Clara is the same police union who refused to go the 49ers games because of Kaepernick kneeling,” Moore told San José Spotlight. “And it’s reinforced by the police and big developers more than likely to get contracts.”

Moore said it’s a conflict of interest for the candidates to receive support from a developer-funded PAC because they’ll likely vote on the Related Santa Clara project.

“They’re trying to reinforce the white, European government leadership in the city,” Moore added. “They don’t want anybody else in there and that’s what this says loud and clear.”

Alex Torke, president of the Santa Clara Police Officers’ Association, did not return calls for comment.

Watanabe is fighting for re-election against Cultural Commissioner Harbir Bhatia, while O’Neill faces engineer Kevin Park. O’Keefe is in a heated race with Planning Commissioner Suds Jain for an open seat on the council. Mezzetti, who has been largely absent in his campaign, is going against Planning Commissioner Anthony Becker and tech worker Gary Barve.

The election sets the stage for a major shift in power as Gillmor could lose her stronghold majority, including allies Watanabe and O’Neill.