San José Spotlight learned about the poll from residents who received it. The poll in part asks respondents which potential mayoral candidate they’ll support. The election is next year, with Mayor Sam Liccardo terming out of office in December 2022.

Of the mayoral hopefuls floated in the poll, only two have actually declared a run for mayor: Peralez and Davis. 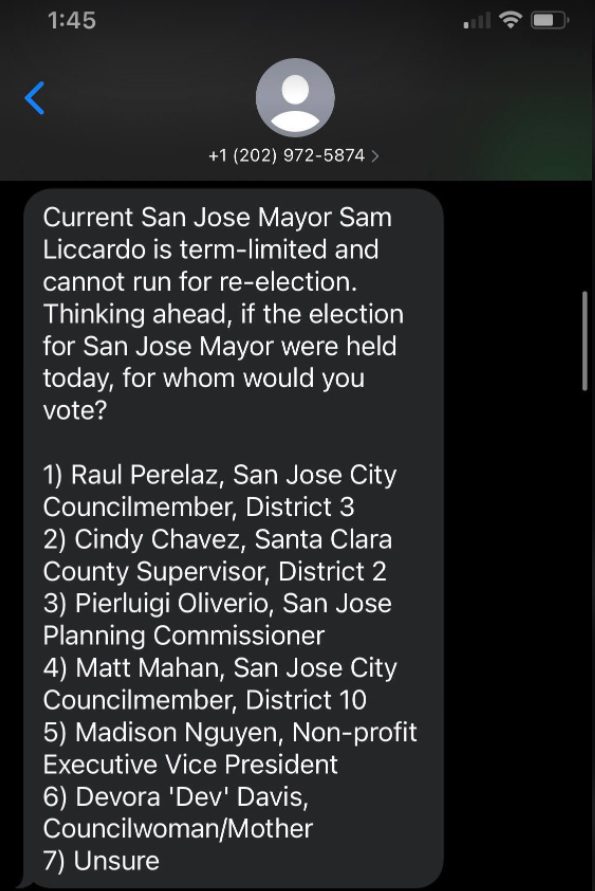 The poll includes favorable information about each candidate, but appears to lean toward labor-friendly lawmakers such as Peralez and Chavez. For example, it touts Peralez’s background as a police officer and teacher and Chavez’s push to double parking spots and increase minimum wage.

For Mahan, the poll mentions that he is new to politics, a former middle school teacher and received a degree from Harvard, which helped him increase community economic development.

Nguyen is mentioned as an immigrant and the first Vietnamese woman to be elected to City Council, who helped expand jobs and the education system. The poll says Oliviero spearheaded volunteerism in his efforts with local libraries, and now serves as planning commissioner. Davis is mentioned in the poll as a leader in education, as well as her fight for an increase in permanent housing supply.

The poll excluded one candidate who intends to run for mayor: Jonathan Royce Esteban.

Mahan, who also received the poll, shot it down.

“I would be highly skeptical of any results they publish given that the authors completely botched my background, failing to mention my entire professional career in the bio section,” Mahan told San José Spotlight.

Another giveaway that the poll has links to the labor camp is that it asks about San Jose adopting a gross receipts tax.

The tax, which would collect taxes from businesses based on their annual revenue instead of employee count, is a progressive policy that was pushed by San Jose State sociologist Scott Myers-Lipton in 2016. It did not end up on the ballot after leaders reached a compromise by raising the city’s business tax. 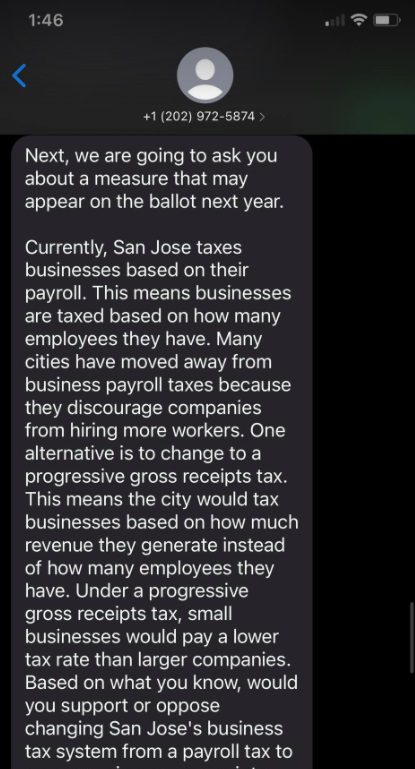 The poll asks whether respondents would support “changing San Jose’s business tax system from a payroll tax to a progressive gross receipts tax.”

It also asks if they or their family members belong to a labor union.

The poll is conducted by U.S. Speaks, according to text messages from the pollster. San José Spotlight found virtually no information online about the organization—a Google search leads to websites warning against text poll scams.

Peralez, who found out about the poll from secondary sources, said he doesn’t know who is behind it. The downtown councilman said he hopes to make changes in the city’s priorities, if elected, particularly focusing on the city’s housing and homelessness crises.

“Unfortunately our mayor has been very broad in his efforts and where he has tried to prioritize his time and energy,” Peralez said. “Because of that, I think we haven’t seen real strong changes or improvements in particular areas that for me would be prioritized.”

Terry Christensen, a retired San Jose State political science professor and local political expert, said he believes Peralez, Chavez and Nguyen would have the best chance of winning because of their political experience and name recognition, while Mahan may be at a disadvantage because he’s served just under a year on the council.

“That puts him in a weaker position than the other candidates who have more experience, but also have been out there in public longer, getting their names known,” he told San José Spotlight.

Peralez and Chavez would create progressive ideas in the mayor’s office, Christensen added, while Mahan and Nguyen would stick more closely to Liccardo’s business-focused ideas, with Davis leaning more conservatively.

Olivero, Chavez and Nguyen have all previously run for mayor unsuccessfully.

“Pierluigi would be more of the wild card, and he was when he was on the council,” Christensen said. “I think he’d have trouble leading the council.”

Oliverio declined to discuss the poll or acknowledge his name being floated for mayor. He said his focus is drawn elsewhere.

Christensen noted that polling this early is a waste of time and money because “most people will not have heard of virtually any of these candidates.”