ElectionsSan Jose
by Tran Nguyen
Rolando Bonilla speaks outside Zuñiga's Restaurant and Cakery in March 2021 in this file photo.

A San Jose City Council candidate is facing questions about whether he used his city commission title to boost his campaign.

But for three months before he jumped into the contested race, Bonilla knocked on “thousands” of doors in the district in an apparent canvassing effort. The commissioner handed out door-hanging flyers with COVID-19 resources. The flyers include his commissioner title—which could run afoul of a city policy—and a link to a personal website that’s now being used for his council campaign.

That means residents who visit the the link on Bonilla’s flyers in search of COVID resources will be directed to a campaign website for his City Council run.

Bonilla claims no wrongdoing, saying his canvassing was not related to his campaign.

“I wasn’t a candidate. I was sharing information about a topic that’s very important to me, as a COVID survivor,” he said. Bonilla almost died from COVID earlier this year. “That’s it.”

But a city policy, adopted in 1984 and most recently updated in 2020, says city commissioners can only use their titles in specific cases. Commission titles can only be used in resumes and public communications related to the commission’s work—with the commission’s approval.

A look at San Jose policy changes headed to lawmakers

Commissioners can also use their titles for public outreach efforts, but the use is time limited and must fall within a workplan approved by the commission.

“This authorization is limited to seeking input and does not permit advocating or opining on any topic,” the policy reads. “Commissioners are free to conduct outreach at any time without the use of their Commission title.”

City Attorney Nora Frimann confirmed city commissioners are not permitted to use their title on mailers or to canvass on issues unrelated to their commission.

“Based on (the) policy, the answer is no,” Frimann told San José Spotlight.

Frimann did not respond to follow-up questions about Bonilla’s case—and whether the city has received any complaints about his title use. She said the city clerk’s office provides training on the policy and enforces it. Commissioners who violate the policy will be asked to stop using their title inappropriately to comply with city rules.

Vice Mayor Chappie Jones, who serves as the council liaison to the city’s Board of Fair Campaign & Political Practices, said he has seen several cases of misuse of titles in previous elections. Violators were asked to halt their use of title.

“I don’t think it’s appropriate for them to do that,” Jones told San José Spotlight. “Ideally it should be related to some type of city business.”

Bonilla said he doesn’t see anything wrong with using his commissioner title on the COVID flyers or on his campaign website. He maintains he’s in compliance with the law.

“This is something that we are obviously very aware of,” Bonilla said. “We take that very seriously.”

Bonilla’s official commissioner page on Facebook also contained a link to his personal webpage that’s now a campaign website. The same commissioner Facebook page was listed on his campaign kick-off flyer, further blurring the lines between his council campaign and his role as a planning commissioner.

Though Bonilla is an appointed official—not elected—public officials are generally required to separate their campaign and city pages on social media. 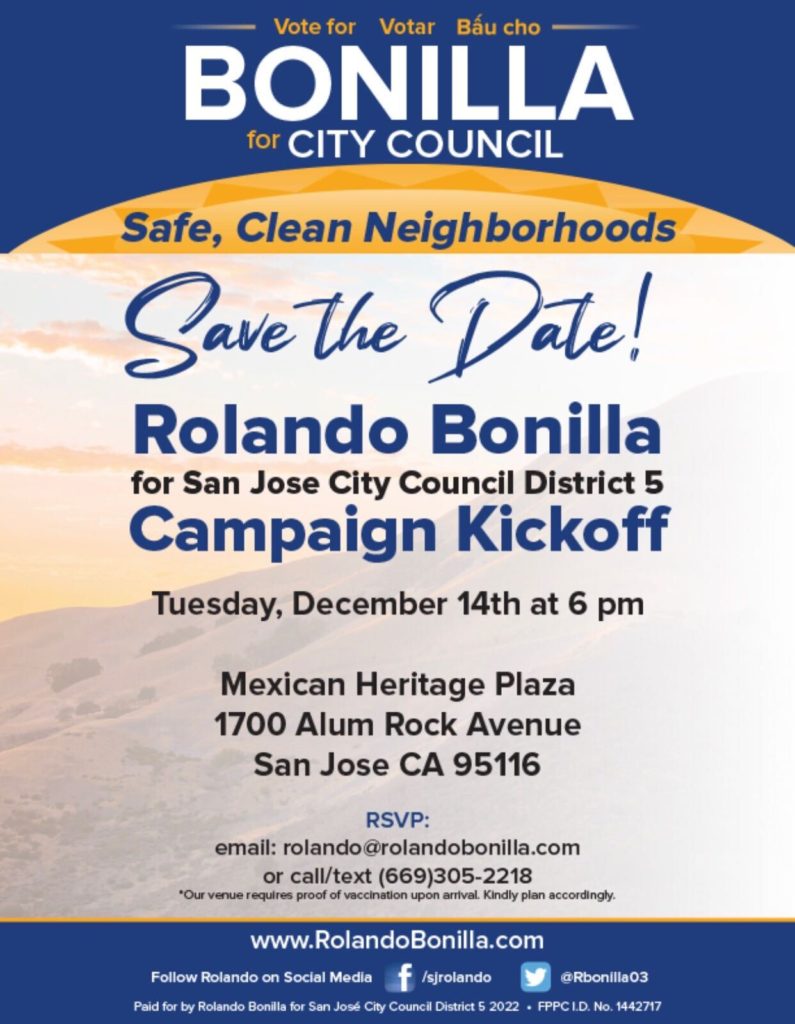 Bonilla deleted the link to his campaign site from his commissioner Facebook page after San José Spotlight’s inquiry.

“The Facebook component wasn’t taken into account, which we’ll clear up right away,” he said. “But other than that, we are 100% only in compliance with the law. Period.”