Years-long finger pointing between the city of Santa Clara and the San Francisco 49ers has taken a bitter turn with both sides accusing the other of owing them millions of dollars.

The 49ers say the city owes $2.74 million for losses resulting from non-NFL events this past year, such as the Pac-12 Championship and Monster Jam, but the city says the team owes $1.1 million for public safety costs for those events.

In a community letter sent to residents, Santana said the 49ers’ failure to reimburse those public safety costs is a violation of Measure J, a 2016 voter-approved measure that promised no taxpayer funds would be spent to subsidize Levi’s Stadium.

“At a time when the city is facing its own fiscal deficits resulting from an economic downturn due to the COVID-19 pandemic, the Stadium Authority’s financial losses of $2.7 million as reported by the 49ers for last fiscal year, compounded by the 49ers refusal to reimburse the city $1.1 million for public safety services, is having a tremendous negative impact on public resources,” Santana’s letter read.

He pointed to other profits that the 49ers generated for the Stadium Authority, which totaled $68 million in revenue last year.

“Any losses related to those events are due to Ms. Santana pushing excessive costs onto the Authority, creating enough dysfunction to run off the Rolling Stones, and implementing a music ban that lead to Ed Sheeran canceling his record-breaking tour stop altogether,” Chandhok said.

This blame game resulted in the Stadium Authority voting to terminate the team’s ability to manage non-football events – a decision which now awaits for a judge’s ruling after the 49ers sued to keep their management duties.

Revenue from non-football events – such as concerts, monster truck rallies and college football games – have dropped in recent years, which Chandhok has attributed to how “the mayor and her army of taxpayer-funded political consultants have done everything in their power to destroy the stadium event business.”

Last year’s non-football event revenue brought in $18,591, which was far below $5 million the previous year.

The stadium’s non-NFL events last year generated the sale or distribution 183,874 tickets, and the Stadium Authority collected $735,000 from revenue surcharges. 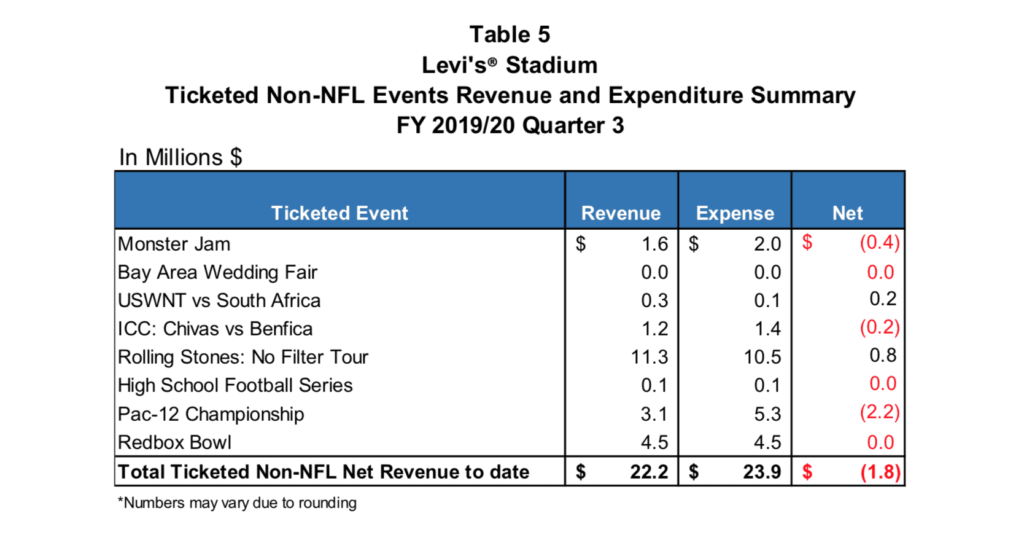 According to the stadium lease agreement, since the Stadium Authority receives all revenues for these events, all losses are also their responsibility, too.

Esther Chi, the 49ers’ controller, said in the June 8 letter that when those non-NFL event losses are reimbursed, the team will remit outstanding public safety invoices, “so we would like to get these transfers completed as quickly as possible.”

The Stadium Authority, which is comprised of Gillmor and her council colleagues, learned of the 49ers’ request during its July 14 meeting. Lee said it was the “first time we heard that number” and that the city would need to review and validate documents before coughing up any money.

The Stadium Authority was previously told that non-NFL events had a projected $1.7 to $2 million loss for 2019-20.

Gillmor was aghast at the $2.74 million request, saying the 49ers refusal to pay public safety costs is a violation of Measure J.

“In the real business world, they would have been fired a long time ago as managers of the stadium,” Gillmor said July 14. “At this point, they have to pay us back or we need to prosecute under Measure J that we’re not getting the funds.”

City Attorney Brian Doyle, who also serves as the lawyer for the Stadium Authority, conceded that the team has no legal right to “hold the (public safety) money hostage for the $2.7 million.” But, he added, the issue is not about missing money.

“In terms of (the 49ers) ultimately paying, I don’t think we have too much to worry about because it is our funds,” Doyle said during a council meeting July 14. “I think it’s a question of timing of the payment, as opposed to whether or not the city will get reimbursed.”

But the 49ers say that $1.1 million has already been paid and has sat in a Stadium Authority account for more than a month.

“It is unclear why the (Santa Clara Stadium Authority) doesn’t simply transfer the funds to pay the city’s bills,” Chandhok said. “Perhaps they prefer making a fuss to the media, or perhaps the (Santa Clara Stadium Authority is concerned that the $1.1 million reimbursement to the city includes the costs of workers comp settlement to a former SCPD police officer who was recently arrested for workers comp fraud.”