It will be years before Google breaks ground near Diridon Station but San Jose residents will soon have a better idea about what the project will look like.

The San Jose City Council in December unanimously approved a $110 million sale of roughly 11 acres of public land to the tech behemoth in a plan that will radically change the downtown core. But what comes next is murky and questions linger about how the land sale will impact the lives of San Joseans after the search engine giant transforms one of the Bay Area’s biggest transit stations into a hub for office, retail and hotel space with more than 2,600 housing units.

Nanci Klein, the city’s assistant director of economic development, told San José Spotlight that project planning and design will start in 2019, with groundbreaking happening in 2022 through 2035. Various community engagement and outreach efforts will also take place.

“We intend to be working hard on entitlements, development agreements with community benefits in two-plus years,” Klein said.

City officials say they’re working just as hard to ensure the project benefits all residents equally, though some advocates aren’t so sure.

Klein said the project will increase city revenue without giving Google any public subsidies. As part of the deal, she said, city leaders will require a quarter of the housing in the Diridon area be affordable.

It could take up to 16 years before the new Google campus comes to life.

Google leaders vowed to prioritize residential development, though it’s still unknown how many housing units the company will build. That number could potentially increase if Google gets approved to build even taller structures than what’s currently allowed.

“The city is exploring the possibility that some of the height limitations in downtown could be raised somewhat,” Klein said. “If the heights can be raised then it’s possible to further increase development capacity. That’s a key piece we should have hopefully in the first quarter of 2019.”

A height increase would dramatically boost the city’s revenue, according to a city-commissioned study. The current plan would generate $8.5 million in annual net tax revenue but bumping up the building heights would bring in $12.5 million.

Property tax revenue is expected to add $45 million to $69 million annually to the public coffers.

Thousands of jobs — an estimated 20,000 — are expected to come to San Jose with Google’s presence and improve the city’s imbalance of jobs, which right now only provides .81 jobs per resident, according to city staff. Currently 60 percent of employed San Jose residents commute to other Bay Area cities for work like Mountain View, where Google is headquartered. 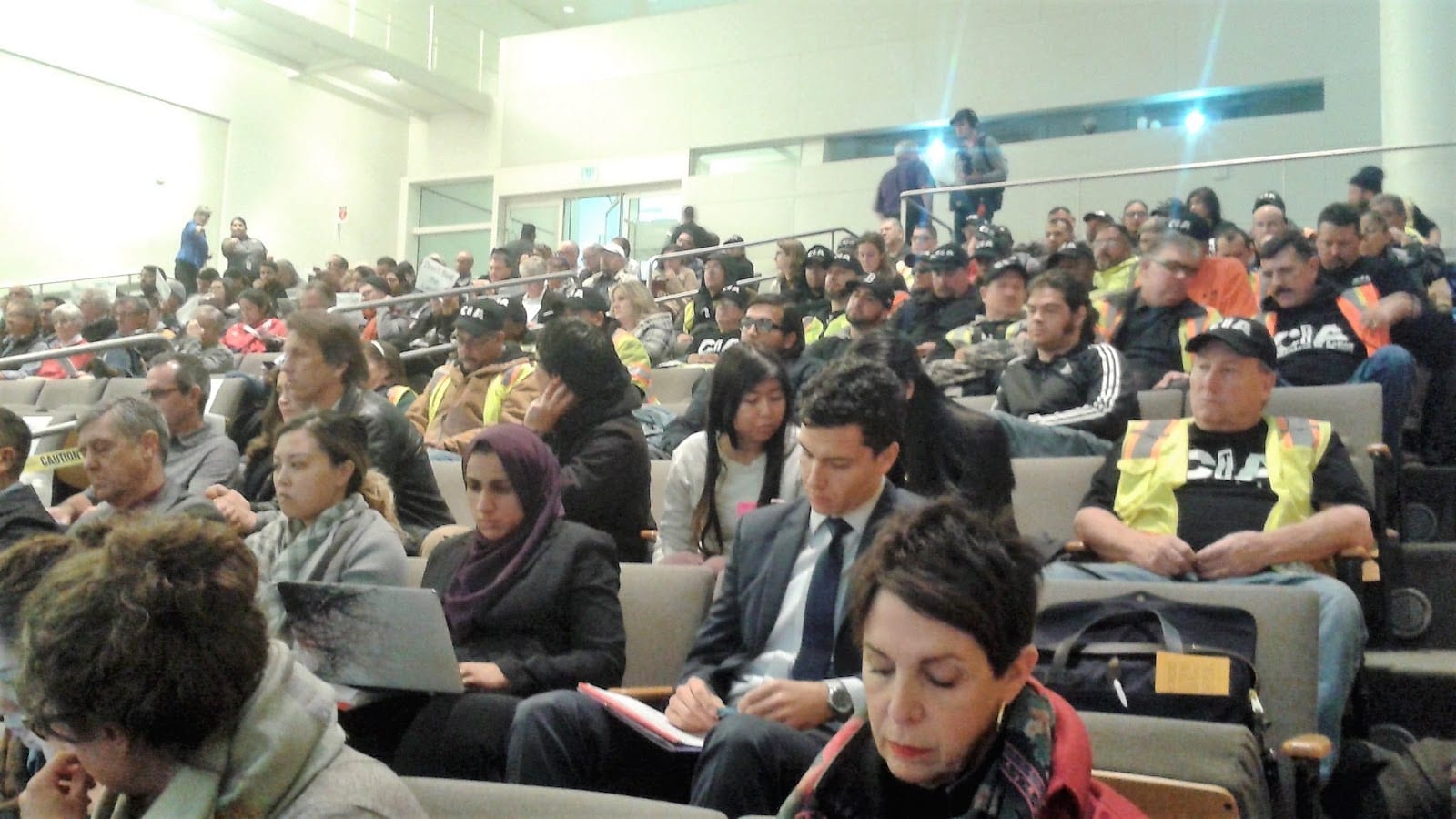 But some advocates worry that Google will displace San Jose’s working families and argue the company should help alleviate the regional housing and homelessness crisis before setting up shop.

“Google should end homelessness in San Jose first and then ask to come in,” Sandy Perry, president of the Affordable Housing Network of Santa Clara County, said hours before city lawmakers approved the deal.

“They just got tens of billions in (global) tax cuts,” added Perry, who went on a hunger strike to protest the land sale, adding he is skeptical that Google will hire San Jose residents.

Daniel Vazquez, a house painter who’s lived in San Jose for 15 years, thinks the city has enough problems on its plate. “I am in favor of Google (as a company) but maybe they can look in other areas,” he said.

But others said Google will create much-needed jobs in San Jose.

“I think the revitalization of the Diridon Station area will be good for all aspects of the city,” said Bill Rankin, president of Save Our Trails and the North Willow Glen Neighborhood Association. “Google is paying full price for the land and much more than had the ballpark been built.” 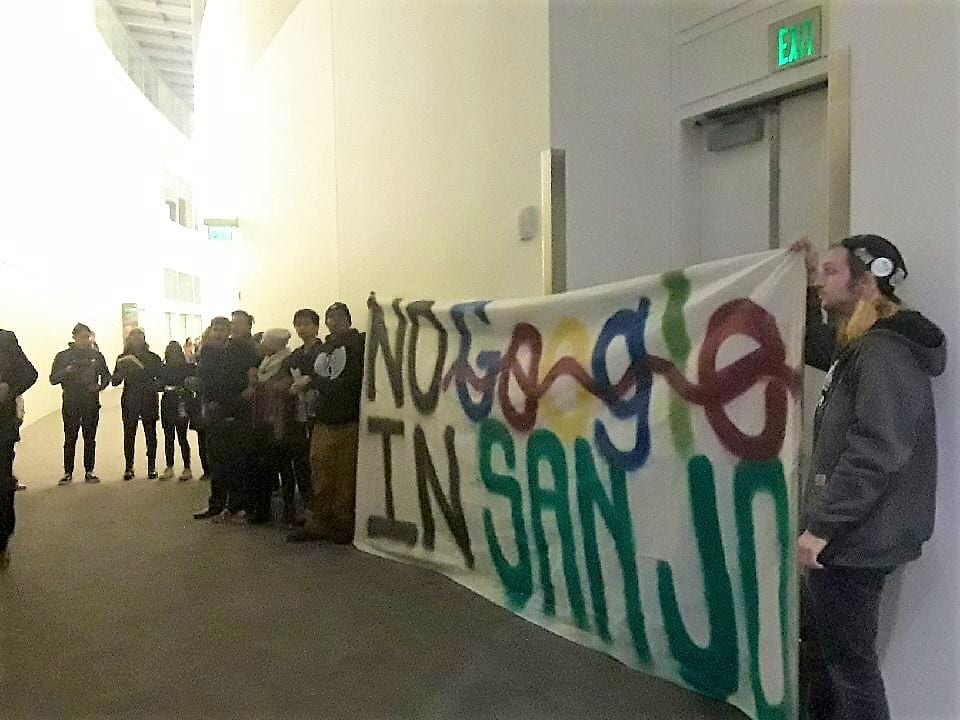 Before the council approved the land sale during a contentious marathon meeting, protesters held handmade signs saying “San Jose Is Not For Sale” and gave passionate testimony about how Google will gentrify the city.

Others took more drastic action. One woman was removed for cussing and eight people were arrested for chaining themselves to chairs inside the council chambers, requiring San Jose police to use bolt cutters before arresting them.

Councilman Don Rocha said he was “comfortable” with the criticism levelled at him.

“For me, free speech, whether you agree with it or not, is free speech,” Rocha said. “Whether it is innuendos or suggestions, this is my job, nobody forced me to take this position, so they can make any accusation they want and I’m quite comfortable with it.

Liccardo said the city can’t continue to be overlooked by tech companies, warning that it could become “a tale of two valleys where the city of San Jose struggles to provide even basic services” like senior nutrition programs.

“We have the burden of providing those services because it is important to us and because our residents critically need it,” Liccardo said.

After apologizing for signing a non-disclosure agreement with Google, downtown Councilman Raul Peralez blasted two organizations — PACT and Silicon Valley De-Bug — for opposing the Google land sale without disclosing they both had received money from Google.

“Not one of them mentioned that they, too, have been willing to accept Google’s generous contributions to the great work that their organizations do,” Peralez said. “It’s not fine if you’re not open and transparent about it… that’s what we need to be able to expect.” 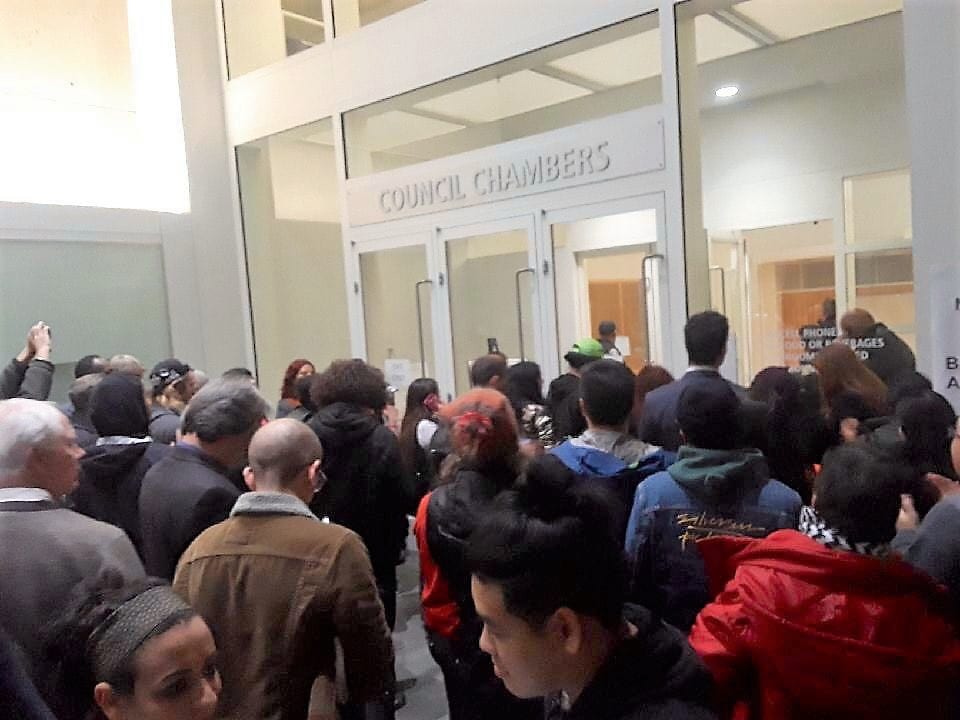