Downtown San Jose’s CityView Plaza is set to turn from a 1970s mixed-use campus to a modern glass-lined, three-tower, 3.8 million-square-foot office park after locking in the final vote of approval Tuesday.

Councilmembers on Tuesday unanimously voted to approve the project by San Francisco developer Jay Paul Co., which is already working on a 1 million-square-foot office building across the street at 200 Park Ave. The two projects will eventually be integrated, company officials have said.

“This is the kind of development that we’ve been hoping to attract into our city, and hopefully this will continue to spur more development interest as we continue to try to grow up from the center of our city,” Councilmember Raul Peralez said Tuesday ahead of the vote.

The meeting Tuesday also marked the beginning of the end of the former Bank of California and Family Court building at 170 Park Ave., which sits on about half an acre of the 8.1-acre CityView Plaza site in the heart of downtown San Jose.

Preservationists have been fighting to save the building, at the corner of Park Avenue and Almaden Boulevard, because of the building’s ties to master architect César Pelli and its distinct brutalist architecture design. Even so, lawmakers voted not to designate the stout, concrete building a city landmark.

That decision came as a relief to Jay Paul executives, who said they’d studied several options to save the building with no luck, according to Chief Operating Officer Janette D’Elia. Instead, the group has offered to make a commemorative virtual reality exhibit of the old plaza and place a plaque on the site where the building stands today.

The Preservation Action Council San Jose started a petition to save the building, nicknaming it “the Sphinx,” and gathering more than 150 signatures in support.

“A vote for landmark status is not a vote against City View Plaza, it is a vote of encouragement to improve that project for the future,” Ben Leech, the council’s executive director, said Tuesday. “This does not have to be an either-or decision.”

Preservationists fight to save former San Jose courthouse from demolition 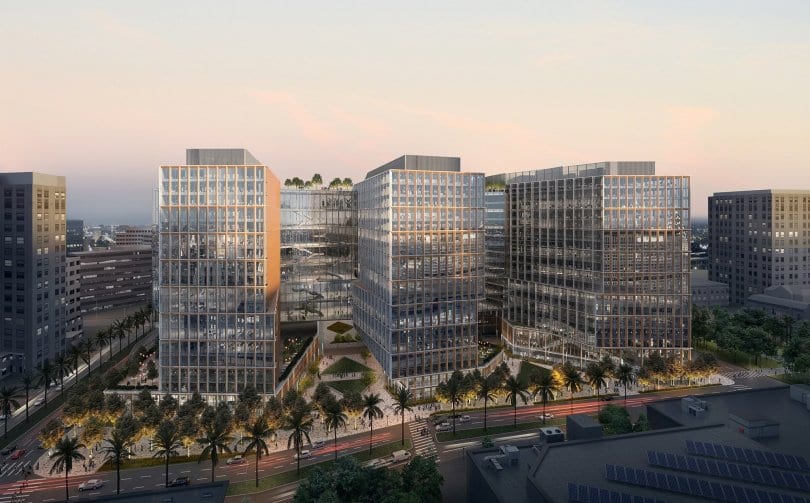 But there was little support from councilmembers and the public Tuesday for preserving the 1973 building, even by the man who developed CityView Plaza — then known as Park Center Plaza — 50 years ago.

The building “was actually sketched out at a dinner table in my house years and years ago with another architect named Sid Brisker,” Lew Wolff told councilmembers. “In my opinion, it’s not an example of any form of architecture, especially (brutalist) or whatever the term that they assigned to it after they found that Cesar wasn’t the sole architect.”

Wolff developed the block-long development during the last major period of urban renewal in downtown San Jose, making the center of the city a noted banking hub. Now is the moment to raze the buildings and welcome in a new era for the downtown core, he said.

With Tuesday’s approval, Jay Paul is set to start construction on its massive new development in downtown later this year. The project will take about six years to complete, even though construction will be allowed 24 hours a day.

All told, Jay Paul is expecting to invest $5 billion into San Jose’s downtown by the time its projects are completed.

The new development will come with 3.6 million square feet of office space above 24,000 square feet of retail. About 6,230 parking spaces would sit underground,  maximized through car lifts and valet parking, city documents show.

Though some San Jose planning commissioners said they’d prefer to see some of those parking spots disappear from the plan, Jay Paul representatives say the spots are needed to attract tenants. Councilmembers, some who praised the design Tuesday, didn’t push the subject.

“This extraordinary investment our city couldn’t come at a better time when we critically need to get people to work,” Mayor Sam Liccardo said. “I’m sure in a few months when the existing projects wrap up, we’re going to have a lot of construction workers out of jobs and this is going to be really a great shot in the arm for our city.”