A proposal to extend a reduction in housing development fees in downtown San Jose has labor advocates at odds with the business community, who say the longstanding incentive program has suddenly become “politicized.”

On Thursday morning, the two groups pled their cases about the incentive program — known as the Downtown High Rise Incentive Program — at news conferences an hour apart and mere blocks from one another.

San Jose city councilmembers are set to vote on the issue at next week’s City Council meeting Tuesday. 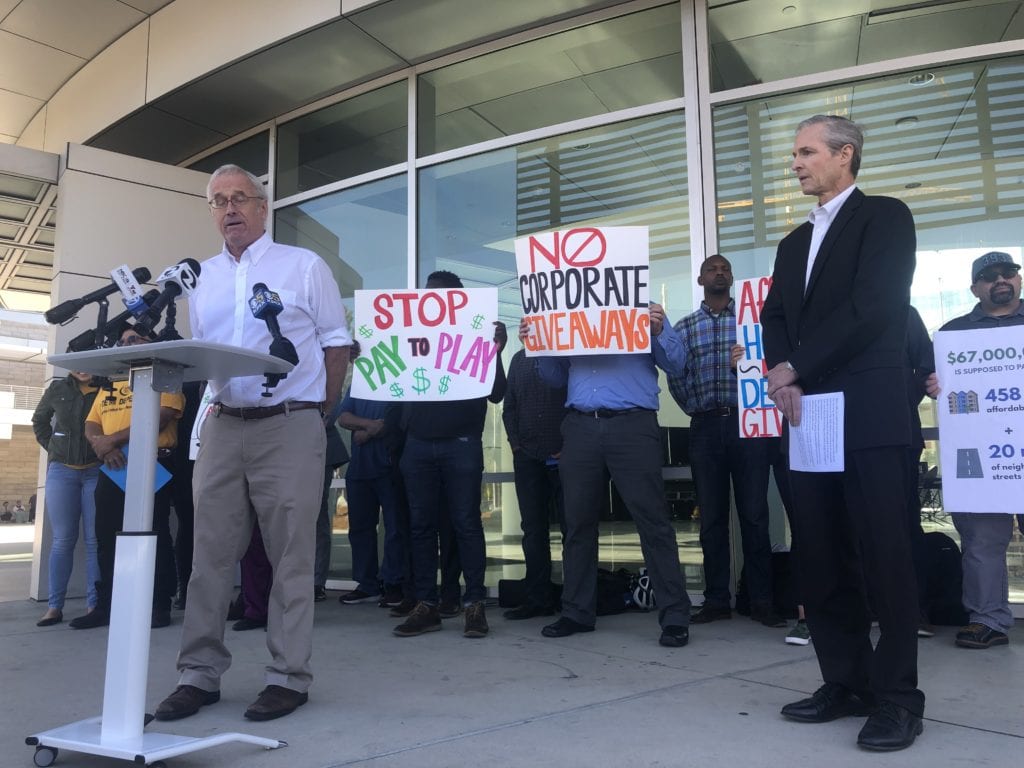 “This is not the time to be giving any kind of breaks to millionaires and billionaires,” said Sandy Perry, president of the Affordable Housing Network of Santa Clara County, during a news conference sponsored by Silicon Valley Rising, Working Partnerships USA and the South Bay Labor Council. “We have what’s called an inequality of wealth problem in Silicon Valley and nationally, so how does increasing inequality help us make a better city in a better Silicon Valley?”

Business leaders on Thursday rebutted those remarks, criticizing the labor movement for politicizing an issue that they had in the past supported.

“This is in the best interest of the public use to be very candid and honest with you. This is not a new program,” said Matt Mahood, president of the silicon valley organization, the area’s former chamber of commerce. “I think they’re just trying to politicize an issue that in the past they’ve supported.”

San Jose officials first approved the incentives in 2007, just before the Great Recession that halted development across the region for years. The High-Rise Incentive program includes reduced park impact fees by about half and the option to delay paying some construction taxes until the project is complete. Developers need to meet certain benchmarks within a specific time period to qualify, an aspect of the program meant to light a fire under builders to get shovels in the ground.

Fast forward to 2019, and the city hasn’t found the right time to phase out the program for good. Instead, city officials have extended the initiatives at least twice in an effort to help the pipeline of housing proposals in the downtown turn into high-rise bricks-and-mortar homes.

According to housing officials who support extending the program, at least 1,522 residential units have been completed under the nearly 15-year-old program and an additional 1,043 are in the pipeline. Far more homes are proposed in the downtown core, but developers have told the city and San José  Spotlight that many of the developments don’t garner wide enough profit margins to attract outside investors, which offer the money needed to get construction started.

A recent feasibility study of housing development in downtown San Jose shows that without incentives, developers would be working with margins around 4.13 percent, which the study claims is not conducive to getting development out of the ground.

“There’s a chance that a developer won’t build if the developer doesn’t get enough of a subsidy, but how much subsidy do we need to pay?” asked Ben Field, executive officer for the South Bay Labor Council. “Really, it’s not worth it at a certain point to subsidize a project if you’re not getting anything in return.”

City officials, however, say there is a benefit to getting such development moving, even with the cost-cutting incentives, which are one part of a larger equation that make development in the city expensive.

The fees “contribute to the total cost stack that developers must equate to the financial returns and opportunities that each individual project represents,” said Economic Development Director Kim Walesh and Housing Director Jacky Morales- Ferrand in a joint memo. “There remains a significant public benefit to increasing the availability of housing and achieving a critical mass of residents in the Downtown.”

Mayor Sam Liccardo, a longtime advocate of developing in the city’s core, said the goal of creating more housing far outweighs the argument that “fee reduction critics” are alleging.

“These fee reduction critics’ own handpicked expert told us exactly what the market is telling us: exceedingly high construction costs will prevent any residential builder from getting the financing to build a high-rise in Downtown for several years—despite a housing crisis that screams for more housing,” Liccardo said in a statement. “We face a straightforward choice: either reduce fees and get housing built, or we sit on our hands and hope for some miracle to solve this housing crisis for us.”

The silicon valley organization and other pro-development business lobbies are concerned that if the program isn’t approved, the city could lose out on the construction of nearly 3,500 homes that could house “working families, students, teachers, nurses, police officers, firefighters and those requiring affordable housing assistance.” But labor and affordable housing advocates are pushing back on that claim, saying the houses built under the program will mostly be “luxury” homes, not apartments those workers will be able to afford.

If approved on Tuesday, the program will be extended until Dec. 2023.