“Monday morning in Los Gatos, I was involved in a tragic car accident that resulted in a fatality of a man,” Higgins Bradanini wrote in the email. “I am heartbroken and deeply saddened by this tragic death.”

While details about the accident were scarce Wednesday night, Higgins Bradanini’s campaign consultant Eric Stroker told San José Spotlight she was not arrested. Higgins Bradanini was reportedly returning from a meeting at San Jose City Hall when the collision occurred.

According to a Mercury News article, the man was struck and killed at 11:40 a.m. Monday on the 900 block of Blossom Hill Road. Police said the pedestrian, who was identified as Timothy Starkey, 66, of Santa Cruz, was pronounced dead at the scene, according to the article. 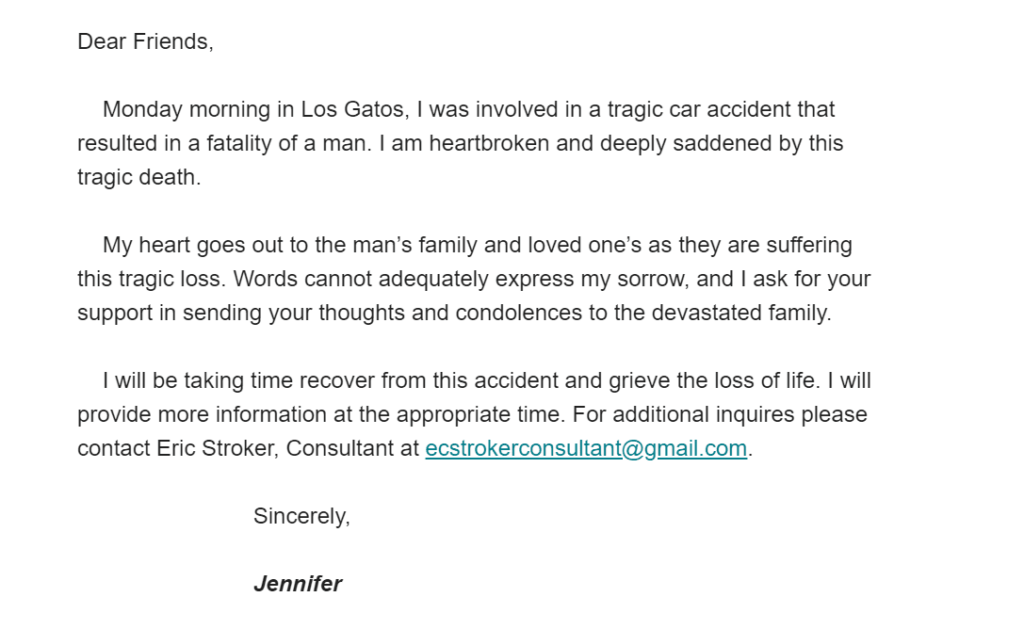 “My heart goes out to the man’s family and loved one’s as they are suffering this tragic loss,” Higgins Bradanini said in the email, adding that she will be “taking time to recover from this accident and grieve the loss of life.” “Words cannot adequately express my sorrow, and I ask for your support in sending your thoughts and condolences to the devastated family.”

Higgins Bradanini could not be reached for further comment Wednesday, and Stroker said he was “unable to speak fully to the details” of the accident and recommended contacting police officials for more information.

A call to the spokeswoman for the Los Gatos Monte Sereno Police Department was not immediately returned Wednesday.

It’s unclear if Higgins Bradanini, who is the president and co-founder of Women’s March Bay Area, will continue her race for San Jose City Council in District 10 to replace Councilmember Johnny Khamis. She faces tech leader Matt Mahan and businesswoman Helen Wang in a contest for the open seat.

“Right now Jenny is taking time to focus on her emotional well being and recover physically,” Stroker said Wednesday. “She requests privacy for the family impacted and for her as she processes her next steps.”