Housing
by Kyle Martin
Rosalie Carrillo, 60, is homeless. She sleeps on the dirt in a tent along the sidewalk at Story Road and Vía Ferrari. Photo by Kyle Martin.

Underneath your highways. On your sidewalks. In their cars. San Jose is home to more than 4,300 homeless residents.

And when the lights go out in Silicon Valley,  this is where the unsheltered homeless population sleeps.

Rosalie Carrillo sleeps on the dirt beside a sidewalk near Story Road. She got hit by a car and now walks with a cane, Carrillo said, because someone stole her walker.

“We just pick a place to stay and we stay there until the cops or the property owner kicks us out,” Carrillo, 60, said. “I’m at the point where I’m just tired. I don’t want to be out here anymore.”

Carrillo once lived in The Jungle, before it was disbanded in 2014, but she doesn’t like going around there anymore. It’s now a place that brings back “ruthless” memories.

San Jose’s homeless population in 2017 reached its third highest peak since 2004 at about 4,350 people. Census data shows about three-quarters of homeless people in the city were unsheltered during the city’s Point-In-Time count. More than half of those on the streets of San Jose have been homeless at some point, with a majority of those surveyed reporting that they’d been homeless multiple times.

Not far from Carrillo, Louis Escobar lays his head down near a sound barrier wall — out in the open so people can see him. He’s been homeless for about three months. 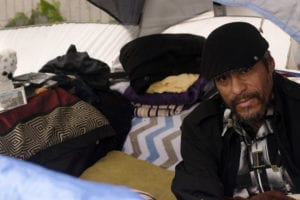 Louis Escobar, 54, lives in a tent along a sound barrier wall at an entrance to Highway 101 from Story Road. Photo by Kyle Martin.

He used to live with family but that didn’t work out. He worked as a security guard, but that job ended after an altercation with a cop.

“I’m going to get a job wherever I can get one,” he said.

That means checking in with Sacred Heart Community Service for work, about a two mile walk from his campsite.

Elizabeth Gutierrez sleeps about 50 yards away near Story Road. She said she’s lived in the area since February last year, but transitions between her spot along the wall, and another couple spots across the street. She wants to leave.

She moves across the street when law enforcement, city notices or government workers arrive to clear the area for a sweep. She says if they keep the area generally tidy, they are mostly left alone.

“If we keep everything clean, we’re good,” she said. 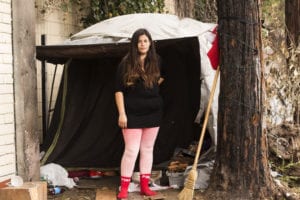 Elizabeth Gutierrez, 30, lives in a tent against a wall in between trees along a Highway 101 entrance from Story Road. Photo by Kyle Martin.

During an abatement, many of the homeless residents’ belongings end up in the trash.

According to a November 2018 report, spending on abatement since 2013 grew from $1.3 million to $2 million, and encampment abatement sites rose from 49 sites to 563 sites.

The report said the city Housing Department does not track services provided before and after an encampment is cleared, making it “difficult to track the effectiveness of abatement actions.

Some would say the abatements don’t work. The city housing officials say abatements will not work long-term.

Ragan Henninger, deputy director of the city’s housing department, says her department “does not consider abatements a housing solution.” Instead, they have prioritized affordable housing.

“We would agree with the auditor that there is simply not enough housing or shelter to meet the demand,” Henninger said.

Henninger believes the city has made progress on the affordable housing front. For example, the city’s two newly-approved tiny homes housing sites, and a “safe parking” site for people to safely park and sleep in their vehicles at night at Seven Trees Community Center.

Another initiative to help the city’s homeless is a city-funded “Transitional Jobs” program for homeless residents to get paid $15 per hour to pick up trash. This program, a partnership between Mayor Sam Liccardo, Goodwill and Downtown Streets Team, will employ more than 25 homeless people.

But these programs alone — tiny homes, safe parking programs and a few dozen jobs picking up trash — are deemed “interim solutions” by the housing department, and will not solve the housing crisis or the uptick in homelessness. Affordable housing is the number one priority.

As the housing department focuses on affordable housing, homeless advocates are protesting further displacement by taking aim at tech developers like Google.

“Google has the money to change San José,” said Ramon Navarro Johnson, 59, a San Jose resident and homeless advocate. “They could change San Jose tomorrow. That’s how much money and power they have.”

Protesters drew their attention to the coroner’s report of homeless deaths in Silicon Valley, distraught by how many names were on the coroner’s list of 157.

“In a city and country with so much wealth, that should never happen,” Johnson said, addressing the county’s homeless deaths. “Google could help end that tomorrow. They can make San Jose a living laboratory of compassion.”