Housing
by Grace Hase
Members of the Student Homeless Alliance at SJSU address the media about the fight to end student homelessness. Photo by Carina Woudenberg.

“For many, attending college is a mean to disrupt the cycle of poverty,” the councilors’ letter read. “But when a student has to worry about finding a place to sleep, it becomes extremely difficult for them to focus on their academics and succeed in school.” 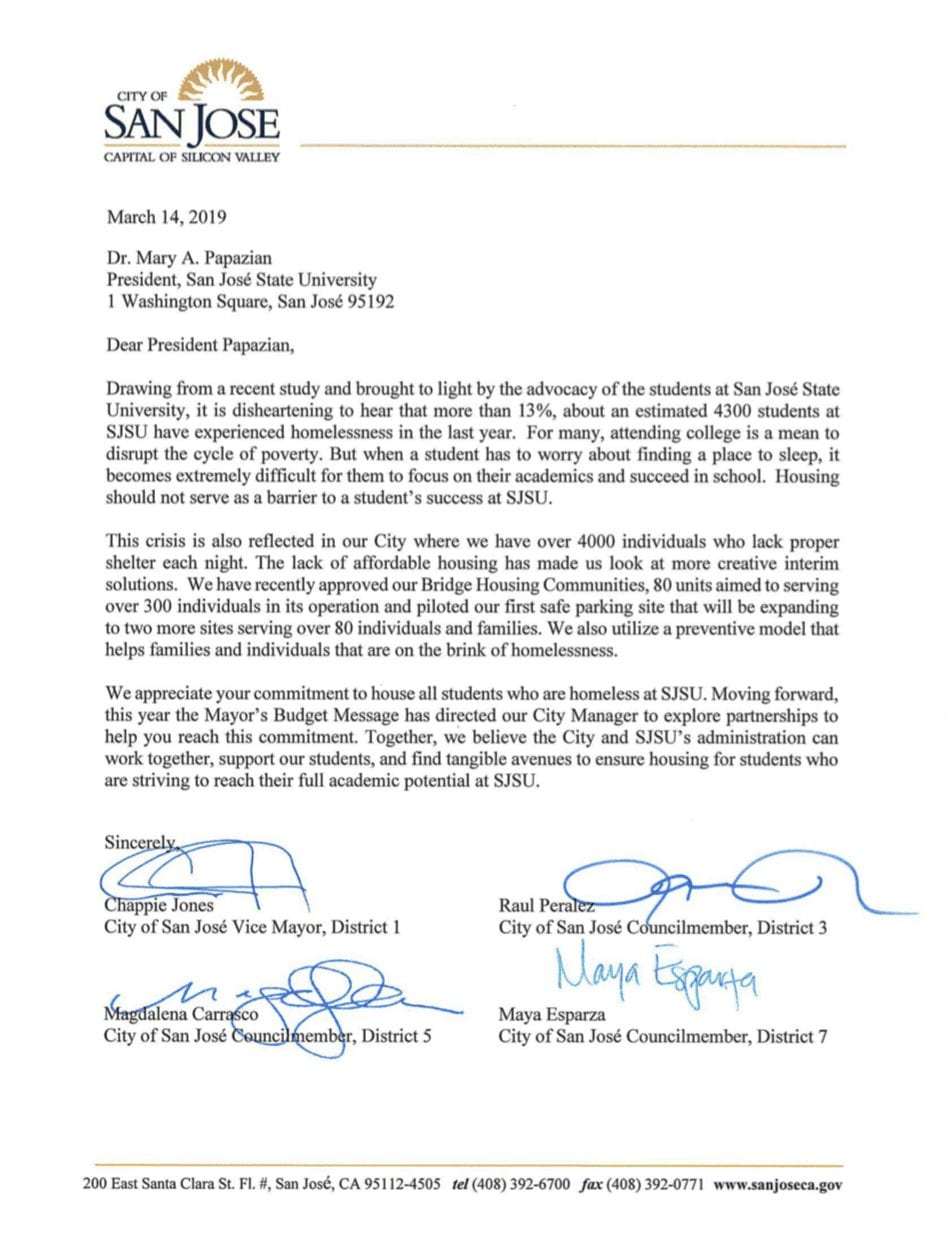 The councilors also pointed to Mayor Sam Liccardo, who publicly acknowledged his support earlier this month in his budget proposal. Liccardo said he was interested in helping the university start a safe parking program for students sleeping in their cars and funding any other student housing initiative.

“What we know from our pilot project this year with Destination: Home on homelessness prevention is that by investing a very small amount of money, when someone is on the verge of homelessness, we can do a lot to prevent a lot of human misery and save dollars by making those investments then,” Liccardo told San  José Spotlight last week.

He added that he’d be interested in expanding that project, which invests about $3,000 per family, to include college students in San Jose.

San Jose State’s Student Homeless Alliance brought the issue to light last year after a California State University report found that 13.2 percent of SJSU students were homeless in the 2016-17 school year. That was two points higher than the CSU system average of 10.9 percent.

SHA has urged university leaders to take action on the issue, previously demanding that they distribute food and housing resources to all students, dedicate 10 to 15 safe parking spaces in the 7th Street garage for those sleeping in their cars and provide 12 beds for emergency housing for up to 60 days.

After many months of waiting, SHA students finally got a meeting with Papazian, who declined to meet the latter two demands.

But with city leaders now chiming in, SHA leader Alejandro Mayorga said it could make a difference.

“We were really happy that (the administration was) committed to housing all their students,” he said. “But at least for me the school didn’t really have our backs. Hearing the City Council has our back, it feels really powerful that the city acknowledges that there is a problem going on.”

Mayorga said that SHA has been working with SJSU Cares – which provides services like emergency housing – and have been contacting representatives like Assemblymembers Ash Kalra and Marc Berman to draft legislation dealing with the issue.

“It is completely unacceptable that more than 4,000 students at San Jose State University have experienced homelessness in the last year alone, the highest rate among any CSU,” Kalra told San José Spotlight. “We can – and we must – do better to work together and ensure that people can afford to live in the communities where they work or go to school.”

For Peralez, the issue hits particularly close to home as the councilmember is an SJSU alumnus. He said he was “alarmed” to  read the CSU report about the thousands of homeless SJSU students.

“To me, a homeless student at SJSU is not merely the school’s responsibility, they are as much my responsibility as the thousands of homeless living anywhere else in District 3 or throughout the city,” Peralez told San José Spotlight. “It is our shared responsibility to ensure that we work on solutions to secure housing for all.”

This story will be updated.