The committee that sets agendas for the San Jose City Council has unanimously approved a plan to make it illegal to promote racing on social media or elsewhere.

Councilmember Dev Davis said SJPD’s Bureau of Investigations, which has detectives scouting out illegal activity online, could be instrumental in helping catch sideshow promoters. City Attorney Nora Frimann said the city is still discussing ways the ordinance can be enforced and what the consequences of violating it will be, if it gets approved by the City Council.

A resident of Communications Hill, who identified himself only as Riccardo at the meeting, said large street races have happened at an intersection near his home for months.

“We need to find a way to deescalate this issue because it’s crazy,” he said. “I wake up at 1 a.m. with dozens of cars revving. It’s crazy to have people discharging firearms in the street.”

In early March, San Jose police arrested 3 people for allegedly having guns at an illegal racing event. Officers also seized five cars, made one arrest for reckless driving and gave more than 40 citations to spectators.

“It’s gotten out of control,” Councilmember Maya Esparza said. “Our residents are angry and afraid and frankly they have every right to be.”

Good morning SJ. Your Officers were hard at work last night conducting sideshow enforcement. Along with the dangerous and reckless driving we often get reports of gunfire at these events. Last night we arrested 3 suspects for illegally possessing these 3 guns. pic.twitter.com/Om4MT9kweq

Two years ago, the San Jose City Council made it illegal to even watch sideshows, as these gatherings that include driving stunts and high speeds are known. Esparza said the measure seemed to reduce racing somewhat—until the end of last year when events ramped up again. She suspects the increase is due to the COVID-19 pandemic.

But Esparza said police — who get calls about racing almost weekly — simply don’t have enough resources to keep up with the influx of sideshows. SJPD has only has four to nine officers in each of the city’s 17 police districts. Street racing often requires officers from each district to respond, but if those officers are responding to other calls, minimal help is available to tackle racers. Despite being the tenth largest city in the U.S., San Jose has one of the smallest police forces in the country.

Esparza played a video of a daytime sideshow at the busy intersection of Hamilton and Leigh avenues, during which someone fired a gun. A flurry of concerned residents posted about the activity on Nextdoor on Feb. 19. 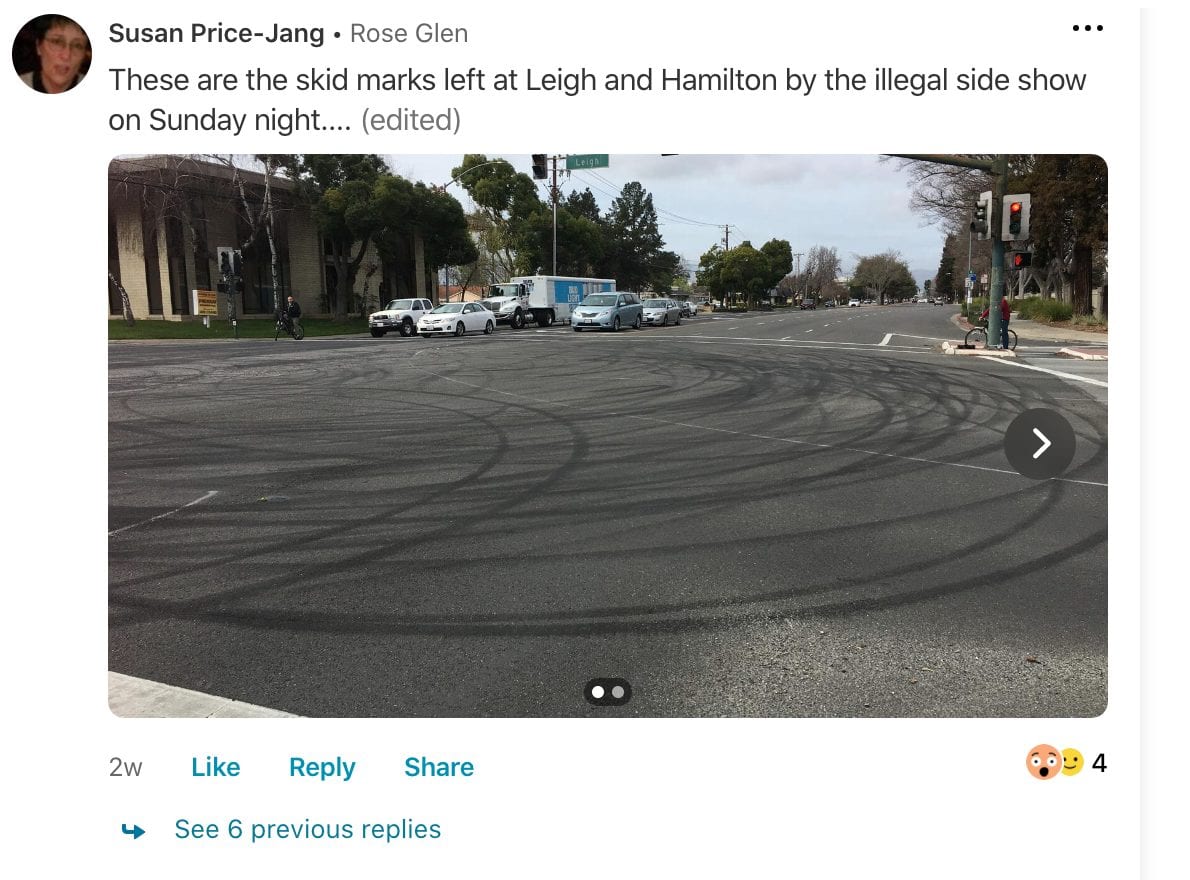 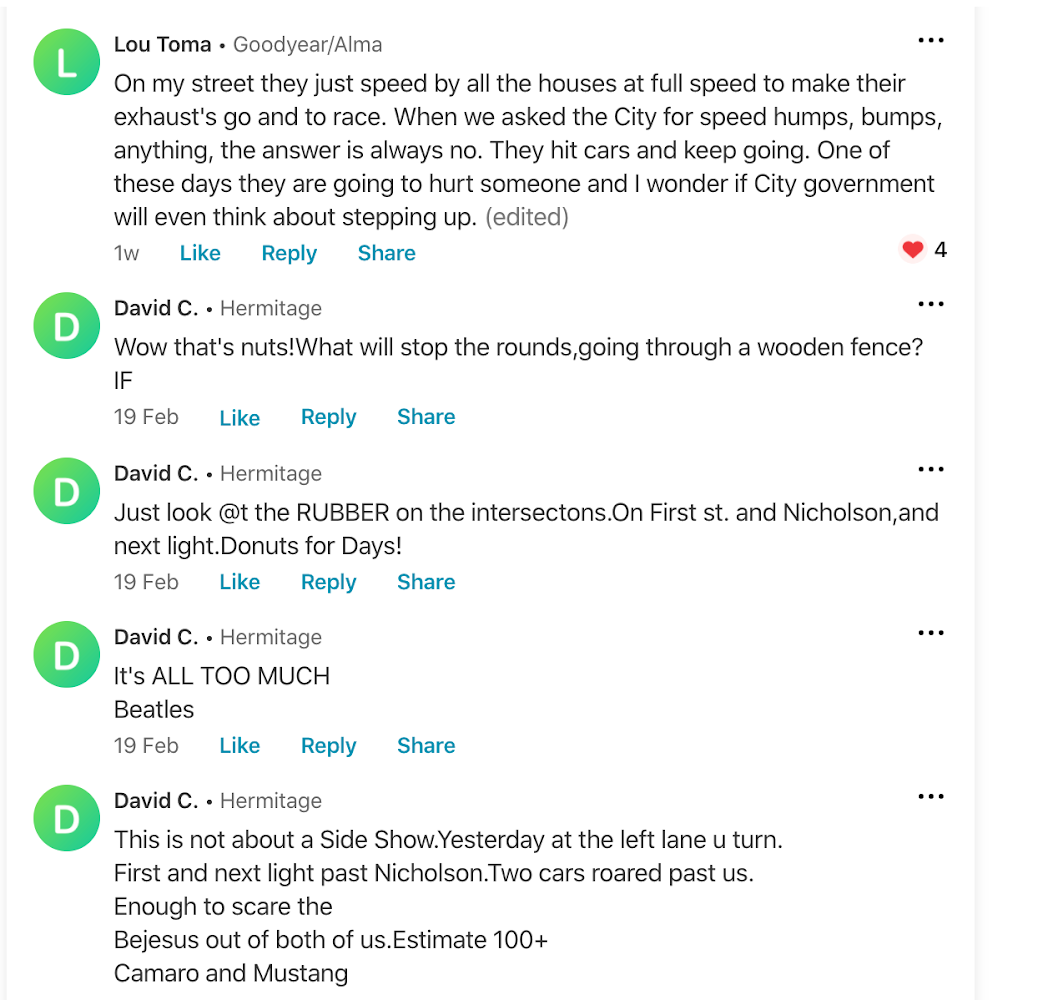 Esparza and Davis, who proposed the recent ordinance making the promotion of sideshows illegal, said San Jose should also set aside annual funds for the police department to tackle racing.

“We made it illegal to be a spectator. That worked for a while, but now we have to go after the promoters. Promoting an illegal event should be illegal,” Davis said. “I think the more we can use technology, the more it can help our very thinly staffed police department to impound vehicles and enforce the law.”

The councilmembers also urged the city to use automated license plate readers in areas impacted most by illegal street races and sideshows.

Councilmember Raul Peralez, a former cop, acknowledged many residents may have privacy concerns about license plate readers. But he has personally used plate readers on the job and said the tool was effective for collecting data quickly when an officer can’t pull over to write every plate number down.

“We may not be getting somebody’s car impounded that night, but if we can follow up with that a week later, that’s impactful,” Peralez said. He said if police can impound cars after a race, it will have a “rippling effect” on others who think they can get away with illegal activity.

San Jose’s flat and wide roads make it easy for cars to zip down the road. Councilmembers discussed other ways to deter speeding, such as creating roundabouts at major intersections, which is a pricey solution. Transportation Department Spokesperson Colin Heyne said adding a roundabout could cost the city up to $1.5 million.

The council will vote on the new street racing ordinance by the end of the month. The city is also considering building a countywide task force to respond to racing events across the region.

How much will your San Jose water bill be in 2021?