Shouting matches at a flag raising ceremony and a cease-and-desist letter. Those are the latest salvos in a growing fight in the Vietnamese community over San Jose’s mayoral election.

Tensions are rising in Vietnamese political circles as two factions stake out support for their chosen candidates—Santa Clara County Supervisor Cindy Chavez or San Jose Councilmember Matt Mahan. It started with a cease-and-desist letter sent by Chavez’s campaign last week to East Side Union High School District board member Bryan Do. In the letter, an attorney for the campaign said Do falsely accused Chavez of being “a communist and a member of radical left-wing communist organizations” and ordered him to stop.

Do, a supporter and informal advisor for Mahan’s campaign, denied calling Chavez a communist. He told San José Spotlight the letter is an attempt to stop him from criticizing her.

Identity politics in San Jose: How powerful is the Vietnamese vote?

The issue reached a boiling point Saturday when Do and his supporters crashed a flag raising ceremony at the Viet Heritage Garden to protest Chavez, who was in attendance. Mahan, her opponent, was also there. Both candidates reportedly left before things got ugly.

Attendants of the ceremony described an unruly—and aggressive—series of events.

The ceremony, a longstanding monthly tradition to commemorate those who fled Vietnam after the war, turned chaotic when Do took over the microphone to say Chavez’s campaign is attempting to silence his criticism of her track record. His supporters, standing behind him, held signs that read, “Cindy Chavez: Stop intimidating (and) silencing our brother, a Vietnamese-American voice.”

A video obtained by San José Spotlight shows the event organizers quickly stopped Do and his supporters. Organizers took the microphone back from Do, the video shows, as they ushered his supporters out of the Viet Heritage Garden.

At least one of Do’s supporters resisted, shouting and reaching across organizers, as they were ordered to leave. Two people who attended the event told San José Spotlight the shouting continued for several minutes, but no physical fight broke out.

Chavez called the incident “unconscionable and unfortunate,” blaming Mahan for pulling the strings.

“Over the past several weeks, Mr. Mahan has attempted to divide the community by running a shadow campaign through his spokesperson,” Chavez told San José Spotlight. “He has allowed (Do) to imply I am a communist among other things, prompting me to issue a cease-and-desist letter to his representative.”

Mahan said he left the event before the tussle began. He referred questions about Chavez’s claims that his campaign is behind Do’s statements to Do himself and later confirmed Do isn’t a spokesperson for his campaign.

“I’m very concerned to hear that Cindy Chavez is using a lawyer to try to silence her critics in the Vietnamese community,” Mahan told San José Spotlight. “It’s completely inappropriate for an elected official to try to intimidate community members.” 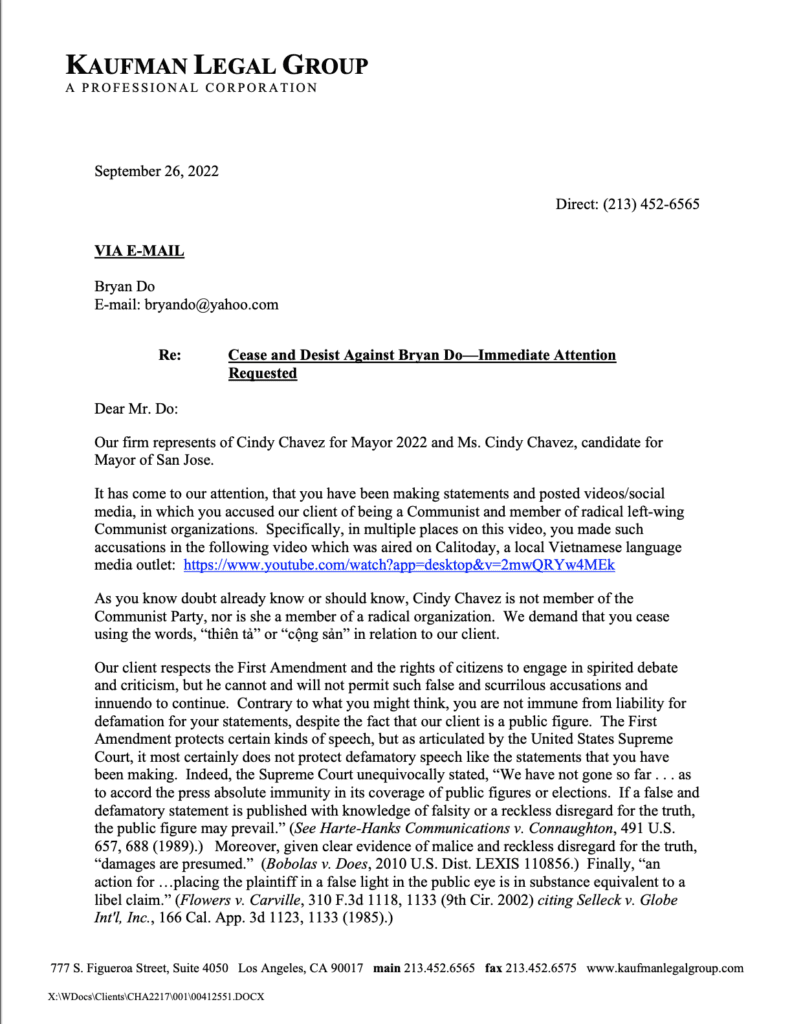 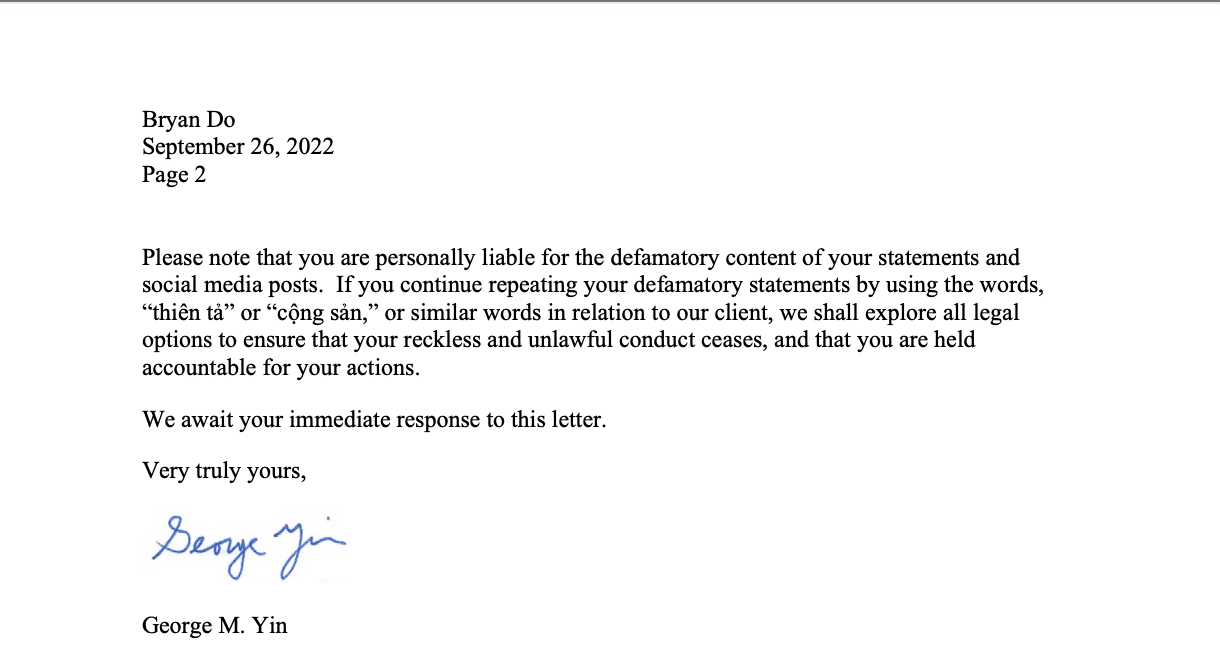 Do is a vocal critic of Chavez. In a September interview with a Vietnamese language media outlet, Do called Chavez and the special interests backing her campaign “thiên tả.” A direct translation of the word is left-leaning, but the word could also be perceived as old slang for “communist.”

Do said he stands by his word choice because Chavez has touted her record as a progressive politician. He said he didn’t call her a communist.

“There’s no mistaking that the accusations made in the cease-and-desist letter are false and a personal attack on my lived experience as a Vietnamese refugee who escaped from a communist regime,” Do told San José Spotlight. “I believe that Ms. Chavez is trying to intimidate and silence me because I have been critical of her record. The claim regarding communism is simply a pretext for her attempt to intimidate and silence me.”

“My commentary was not at the behest of her past nor her current opponent,” he said.

Do said he was slapped with the cease-and-desist letter after he called out Chavez for claiming in a campaign email that all Vietnamese media outlets in Northern California had endorsed her.

Do said the initial email was misleading, prompting backlash from some local media outlets. He demanded Chavez’s campaign issue a retraction and an apology.

Linda Ta, a community leader who attended the flag raising ceremony, said she was shocked by Do’s actions.

“The ceremony is to honor our community, and it is not the place for such unruly activities we saw on Saturday,” Ta told San José Spotlight in Vietnamese, adding the organizers are planning to ban Do from future events. “I have never missed our flag raising event, and I have never seen such a thing.”

Another resident who attended the ceremony said the scuffle left a tainted mark on the community.

“Everyone has the right to support their preferred candidate,” the person told San José Spotlight. They declined to give their name. “But Do’s actions were simply unacceptable.”