San Jose spent millions on a mobile app to improve community services, but only about 10% of residents use it.

The city has put $2.3 million into developing its San Jose 311 app, which became operational in 2017. The app is designed as a one-stop shop for residents to report a variety of issues including abandoned vehicles, blight, graffiti and potholes, or to request other supportive services from the city. The goal is to streamline the process through the app by notifying the right departments directly.

Unfortunately, residents using the app find it to be glitchy and slow.

“The app gives you a progress report on your complaint, which is nice, but it is so slow,” said Michele Mashburn, a longtime resident and former director of the San Jose Peace and Justice Center. “There are also some major functionality issues.”

Mashburn said she has used the app multiple times—primarily to report abandoned vehicles or cars blocking her driveway—but waited several days, if not weeks, before the problem was resolved. She said the app often freezes, making it difficult to submit reports.

There have been more than 150,000 reports over the past year—the top problems are junk removal with 73,000 complaints, abandoned vehicles with 36,000 complaints and graffiti with 25,000 complaints. San Jose has a backlog of about 6,000 open cases and 7,500 cases in progress going back to January, according to city data, making it difficult to address incidents on a timely basis. 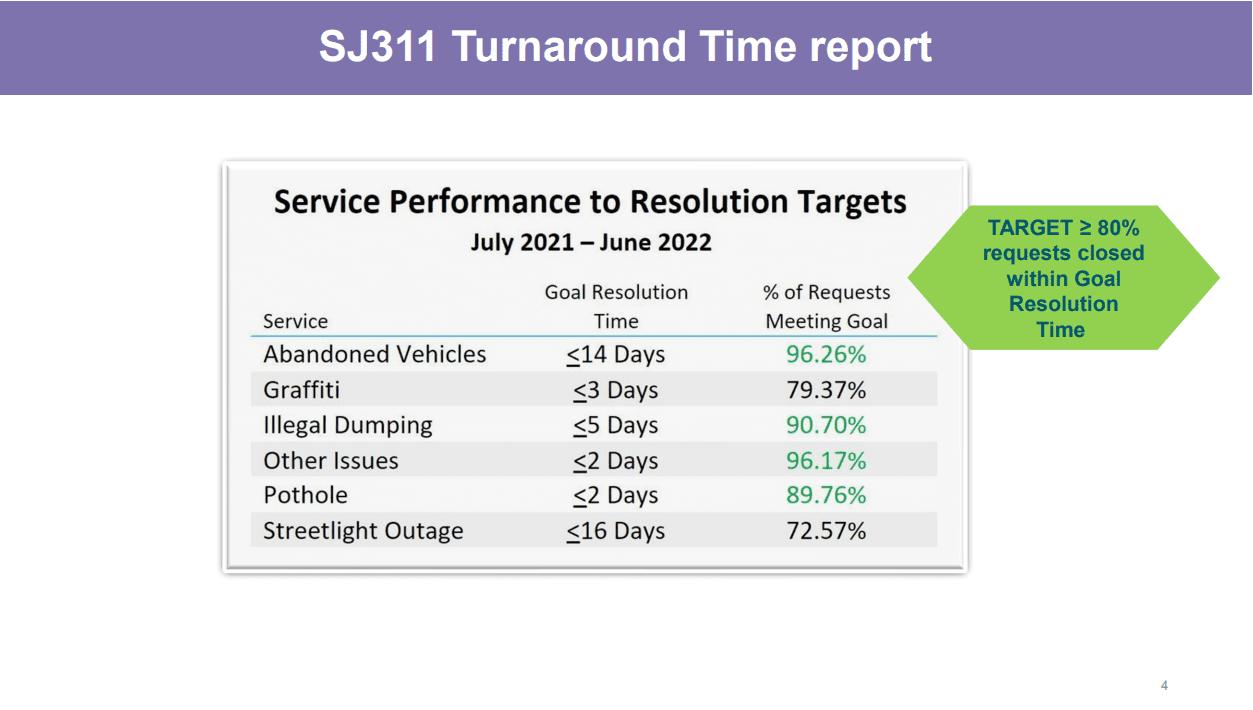 Janice Quintana, a consultant who helped San Jose and other cities set up 311 apps, said the backlog has nothing to do with the technology—and is not unique to San Jose.

“People like to blame the 311 app for delays, but it’s often staffing or just more demand now for things like junk pick up, than ever before,” Quintana told San José Spotlight.

Mashburn said her biggest concern is the app does not address the needs of the disabled community.

“The app is a great idea,” Mashburn told San José Spotlight. “But why do they make it more difficult for me to complain about an access barrier for a wheelchair, than it is to complain about a vehicle on the street that’s been parked and is now blight?”

She said San Jose needs to expand its 311 app to accept reports for ADA violations and have more accessibility options, such as for people with vision impairments.

Deputy City Manager Rob Lloyd said San Jose has been troubleshooting the app through an equity lens. In late 2020, the city added Spanish and Vietnamese translation options. This year, it also expanded to add support services to connect residents with WiFi, affordable housing and eviction prevention services. Lloyd said the city wants to make sure the app is not just for complaints.

“We want to connect those people to services as well,” he said, adding a rent registry portal is going live in September.

Lloyd said he considers the app a success with more than 100,000 accounts since launch, describing it as “one of the most successful 311 apps in the nation.”

Ahmed Banafa, a general engineering professor at San Jose State University, said the success of an app is not determined by the number of accounts but through user interaction.

“The No. 1 factor of success is the usage of the app itself,” Banafa told San José Spotlight. “You would need hundreds of thousands of accounts for a city with over one million people.”

Banafa said if this was a senior project it would get a B- because of some fundamental flaws. He describes the app as being clunky, freezing often and requiring too much information. Residents need to create an account with their full name, address and contact information before inputting complaints.

“There is a rule in the web and app design called the three clicks rule,” he said. “If I can’t get what I want in three clicks, I’m done.”

Lloyd said the city is working on getting the word out about the app through social media and advertising at community events.

“(This strategy) does correlate with increased registrations and users,” Lloyd said, adding more staffing and funding is needed to raise awareness. “When we do that for a month or two, it’s good. As soon as we stop, we start seeing that taper.”