Kline applied for the appointment ahead of the deadline, said City Clerk Toni Taber, but his name didn’t appear alongside the nearly two dozen other applicants. Taber said the application software erroneously marked Kline as a current commissioner because of his previous term.

To appoint a new commissioner, San Jose City Council members first vote on the full list of candidates and those with at least four votes advance to the interview round. But Kline’s name never appeared on the list — and it left some councilmembers confused, despite Taber sending the offices an email adding Kline’s name to the list.

“Had I had the opportunity I would have included him in my four,” said Councilmember Pam Foley during a special meeting Monday.

The councilors decided to allow Kline to interview for the position, despite not receiving the four initial votes. The other three finalists are former Councilmember Pierluigi Oliverio, Santa Clara County Planning Commissioner Aimee Escobar and consultant Rolando Bonilla.

The trio was publicly interviewed on Monday, but Kline wasn’t there. He’ll interview in front of the City Council on April 9, nearly three weeks after the other three frontrunners, raising questions about whether that decision gives him an unfair advantage.

“In my mind, this gives Norm an advantage, because now everybody has made their selection of four and then we’re either saying ‘sure, give Norm a shot,’ or ‘don’t give Norm a shot,'” said Councilmember Raul Peralez. “You’re just making a decision based on one individual now, you’re not having to vet it out amongst an entire list and having to narrow it down to four.”

There are also concerns that Kline could watch the video from the Monday meeting and hear his competitors’ answers. The other three candidates had to wait outside while others interviewed for the single vacancy.

Liccardo, who’s a close ally to Kline, did not advocate for letting him interview or not. Instead, he claimed, the snafu came to his attention in “the last few days” though his staff appeared to know about it. Liccardo previously enlisted Kline to work as a transportation expert in his office.

“I’m open to considering how we rearrange to ensure everyone feels this is fair, but the concern seems to be that Norm was not on the first list,” the mayor explained.

Kline, a businessman and former candidate for City Council, declined comment on the issue Tuesday.

Oliverio’s interest in the commission vacancy led to more heated exchanges on Monday.

Just before the meeting, labor groups sent letters and fired off emails calling Oliverio “unfit to serve” and encouraging residents to urge councilors to deny his candidacy. The blasts called him “an accused sexual harasser,” referring to a lawsuit in which Oliverio was accused of sexually harassing his chief of staff Denelle Fedor.

Oliverio represented District 6 on the City Council for a decade. Oliverio was dropped from the suit by Fedor, who later settled with the city for $10,000 and now works for Councilmember Johnny Khamis. 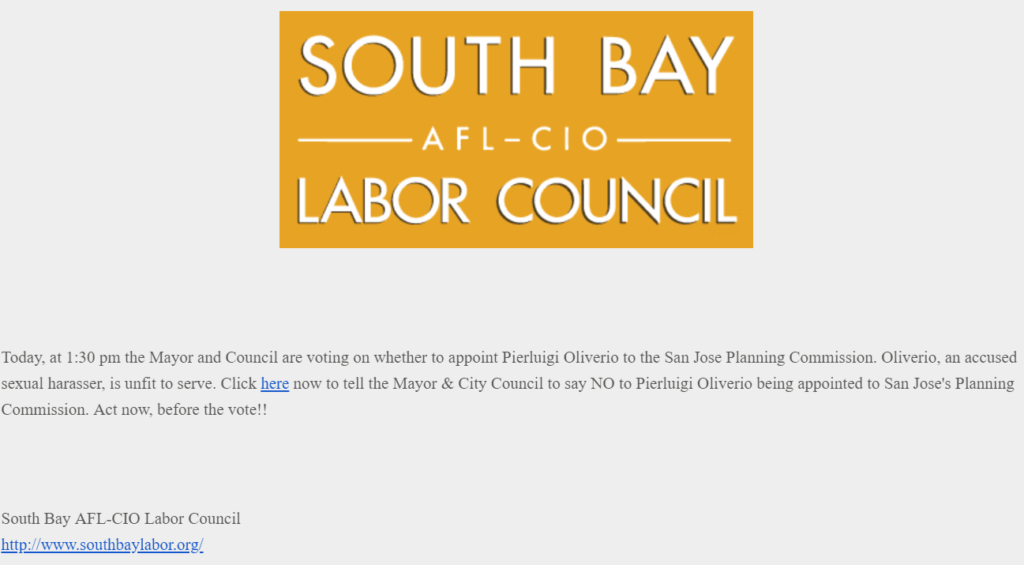 Without wasting any time, Liccardo addressed the “elephant in the room” — the sexual harassment lawsuit.

“We’ve been barraged by dozens of form emails from a particular source about a lawsuit that was brought against you and that is the basis for some efforts by some to lobby against your appointment,” Liccardo said. “You want to respond to that in any way?”

Oliverio fired back by saying he wasn’t censured by the City Council and dropped from the lawsuit. “I can tell you I was dismissed with prejudice and nothing was exchanged,” he said.

A pair of progressive councilors, Raul Peralez and Maya Esparza, questioned Oliverio’s loyalty and commitment to the position since he ran for a handful of other public offices since leaving the council. Oliverio said he’s finished running for elected office and felt an appointment is a “more humane way” to give back to the community.

Oliverio touted his extensive citywide land use experience, having attended 440 City Council meetings with 80 percent to 85 percent dealing with land use items.

Bonilla and Escobar also were interviewed for the Planning Commission opening.

Bonilla, who serves as Voler Strategic Advisors’ chief strategy officer, got his start in San Jose politics working for former Councilmember Nora Campos. He said his life has changed now that he’s a father, and he wants to give back to his community.

“Your life changes when you have kids,” Bonilla, who has 23 years of political experience, told the lawmakers. “You begin to think about how you can contribute to the very environment that they are part of each and every day. I’m proud to say San Jose is my forever home.”

Bonilla also said the Planning Commission needs more diversity — it has no representation from East San Jose but it’s stacked with commissioners from affluent Willow Glen.

Escobar, who works as a senior housing analyst for the Santa Clara County Housing Authority, also serves as a member of the
County of Santa Clara Planning Commission.

“I feel I could be more effective as a planning commissioner for the city of San Jose given there’s more ability to weigh in on decisions made following our general plan as opposed to county lands,” said Escobar, who grew up in the Evergreen area.

Escobar said she’s handled contentious, highly-charged decisions as a county commissioner and would bring that approach to San Jose.

After Kline interviews in April, the City Council will select one person — Oliverio, Bonilla, Escobar or Kline — to fill the sole vacancy on the 7-member Planning Commission.

Earlier this year, the city ethics commission was at risk of being dissolved because no one had applied for four vacancies. San Jose was at risk of losing local control of the committee, handing the enforcement duties to the state FPPC.