InvestigativeSan Jose
by Eli Wolfe
Incumbent Gary Kremen is running to retain his seat on the Valley Water board. File photo.

Tech entrepreneur and politician Gary Kremen is being accused by a former campaign staffer of sharing unsolicited nude photos with them.

The staffer said the images coupled with other questionable behavior from Kremen caused emotional and mental anguish, eventually forcing them to quit working for him.

The former staffer, who spoke with San José Spotlight on condition of anonymity, worked on Kremen’s campaign for Santa Clara County assessor for several months last year. The race has gotten ugly, and Kremen has repeatedly criticized incumbent Assessor Larry Stone’s management of the office and said he put employees’ lives at risk during the COVID-19 pandemic.

The staffer on May 11 opened a Dropbox used by Kremen to store campaign-related photos and noticed Kremen had added several partially nude photos of himself and his longtime partner, Essy Stone.

San José Spotlight reviewed screenshots of the explicit images from the Dropbox account. Kremen and Stone are in bed, nude from the chest up. Stone’s left breast is exposed in four photos. Only the staffer and Kremen had access to the Dropbox, the staffer said.

Kremen has denied any wrongdoing, and said the images were part of a large photo dump the staffer was supposed to comb through for campaign purposes.

The staffer said they became upset and vomited after seeing the photos.

Later that day, they spoke with Kremen on the phone to see if he had uploaded the photos by accident. They said Kremen did not give a straight answer—instead, the staffer said he joked about the pictures and asked if he looked good.

The staffer said they expressed discomfort and told Kremen they wouldn’t use the Dropbox account until he deleted the photos. The staffer said Kremen got angry, refused to delete the photos and asked them to work around the pictures.

According to the staffer, the photos were still in the Dropbox when they quit on July 7. Kremen says he removed the staffer’s access to the Dropbox photos after they had a disagreement over a foreign policy issue, but did not say when that happened.

“He made it really uncomfortable, made jokes about it, laughed at me being uncomfortable and offered no solutions,” the staffer told San José Spotlight. “He made me feel like maybe he did this intentionally. Or he did it unintentionally and enjoyed that he had done this.”

Kremen told San José Spotlight he uploaded more than 20,000 photos to the Dropbox and didn’t check whether any intimate ones were included. He said Stone was breastfeeding their son at the time, and the photos appeared to have been taken in bed shortly before or after the feeding. He and Stone claim the photos are not sexual in nature. There is no child pictured in the images.

“I didn’t have time to go pick out some campaign photos, nor did I have time to go through each photo and see if there happened to be any personal photos in there,” Kremen said. “But to imply I showed them to upset someone on the team is shocking.”

The staffer acknowledged there were more photos than just the four explicit images in the Dropbox, but could not say for certain how many. They estimated there could’ve been more than 500 images.

Kremen denied joking about the photos or refusing to delete them, and said taking the images from the Dropbox was an invasion of privacy.

“To secretly keep copies of all my photos and share them with others is a betrayal of trust, and possibly a violation of the law,” Kremen said.

Kremen said the staffer left his campaign over a disagreement regarding Israel and Palestine. He claims the staffer is raising this issue now to smear his candidacy for assessor. The primary election for the race is in June.

Five sources told San José Spotlight they spoke with the staffer about the photos and Kremen’s behavior. The sources confirmed the staffer was disturbed by Kremen’s actions, but felt they couldn’t quit his campaign because it was their only source of income. Four said they encouraged the staffer to quit because they believed Kremen was committing sexual harassment.

The staffer said they were unemployed after the campaign and feared coming forward with this information could impact their job hunt and future prospects.

“Obviously this is uncomfortable to talk about,” the staffer said. “I had to be prepared for him to retaliate against me, and I’ve been very terrified of what that might look like.”

Stone was apparently unaware Kremen shared nude pictures of her with an employee on his campaign. A couple weeks after the staffer quit the campaign, they notified Stone on July 24 via text that Kremen had shared the intimate photos. The texts were reviewed and verified by San José Spotlight.

“Ewww I didn’t know that wtf?!?” Stone replied. In subsequent texts, Stone apologized for Kremen’s behavior. She said Kremen is “oblivious about nudity” and cited an occasion where her friends visited their house and Kremen was “lying on the floor in his holey underwear the whole time!” She added that Kremen is “not an exhibitionist, he’s just a slob.”

“He was just being careless, there’s nothing malicious about it,” Stone said, adding she was breastfeeding at the time and doesn’t view the photos as “sexy.”

She added she felt victimized by the staffer showing the photos to a media outlet.

Kremen achieved fame after setting up Match.com, one of the first online dating sites. He was also the first registrant of Sex.com, which earned him a streak of notoriety.

Over the years, Kremen has served as an angel investor for various companies. He also founded the solar energy financing company Spruce Finance, and co-founded Pace Avenue, a firm that develops solar technology.

Kremen has spent tens of thousands of dollars in recent years backing candidates and groups in elections across Santa Clara County. From 2018 through 2021, Kremen contributed $146,869 to various political organizations and races at the local, county and state level.

Kremen has also carved out a political career for himself in Silicon Valley.

In 2010, he was elected to the board of the Purissima Hill Water District in Los Altos Hills. He currently chairs the Santa Clara Valley Water District’s board of directors—a seat he won in 2014 after pouring $479,000 that year into the election, a stunning cash haul for a water board election.

Now Kremen has his sights set on the Santa Clara County Assessor seat —taking on longtime incumbent Stone. Kremen has criticized Stone’s management of the office and boasted he had more than 70 commitments from elected officials willing to endorse and help his campaign.

Kremen has already amassed $241,273 in his war chest—with $170,000 coming from his own pocket. He also has at least one significant endorsement from the Democratic Activists for Women Now (DAWN). 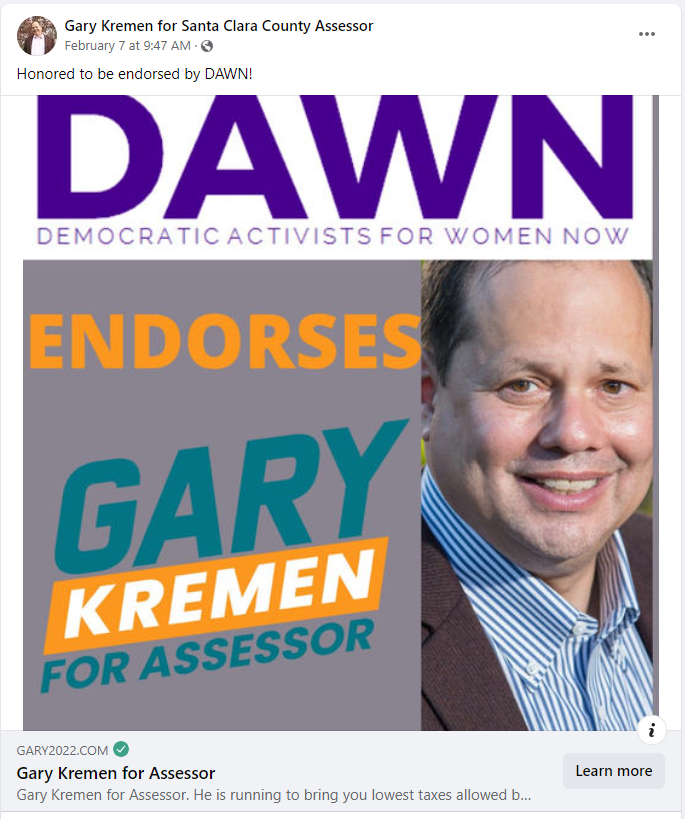 The staffer who spoke with San José Spotlight said they first became acquainted with Kremen in late 2019 or early 2020 from Democratic political circles. In early 2021, Kremen approached them about working on his assessor campaign.

From the start of their working relationship, the staffer said Kremen’s behavior made them uncomfortable.

For instance, the staffer said Kremen hired them as a campaign manager before he officially filed his election papers. Kremen claims the staffer was a personal assistant. According to the staffer, Kremen periodically showed up at their home to compensate them in cash—instead of paying them through the campaign.

His assessor campaign is also set up as a nonprofit, according to public records. Kremen said he set it up that way to avoid liability in the case of accidents.

The staffer said Kremen invited them to parties at his house where he would encourage them to drink. The staffer said he would sometimes get physical, touching their shoulders and legs. Kremen also showed the staffer photos of himself with pornographic actors. He was clothed in the pictures.

“He was always talking about the times he was so drugged out with all these women, and that he can get whatever he wants,” the staffer said, adding Kremen made disparaging comments about their significant other and tried to exclude them from parties.

Kremen denies the allegations about sexualized conversations and touching.

The staffer decided to sever ties with Kremen in July after he allegedly threatened them by saying he would ruin a local Democratic club where they were both members. The staffer said Kremen made this threat after he learned the club was planning to approve a resolution supporting a foreign policy position he disagreed with. Several sources told San José Spotlight the staffer confided in them about Kremen’s threat.

“Throughout our relationship he had crossed a lot of personal boundaries—a lot of sexual boundaries—but he had never professionally tried to threaten me,” the staffer said. “At that point I was like, ‘I need to get out, I can’t work for him anymore.’”

Kremen said he had a heated disagreement with the staffer over Israel and Palestine and a related resolution vote by a political club. He said he lost his temper.

“My tone was inexcusable and I apologized for it repeatedly,” he said. “As a result of this behavior, our working relationship was severed.”

The staffer, who still works in Silicon Valley politics, said they want Kremen to be held accountable for his behavior. Given his level of influence, they’re afraid that may not happen.

“He buys a lot of his friends and has good relationships with some of the very big players,” the staffer said. “When he provides a constant check for their campaigns and reelections, I’m not sure they’re going to want to stand against him.”