Blog
by Janice Bitters
An example of a "bike boulevard" in Santa Clara's newly adopted bicycle plan. The city doesn't have bicycle boulevards, which are generally low-speed roads that cars and cyclists share equally, but more than 14 miles could be added in the city in the coming years. Image courtesy of Santa Clara public documents

Santa Clara has a newly-adopted $39.3 million bicycle plan this week that aims to double the number of miles in the city with bicycle lanes and infrastructure in the coming years.

The plan, adopted by councilmembers Tuesday night, comes after about two years of planning and community meetings by the city and its consultant, Alta Planning + Design. Bicycle advocates praised the plan, saying it will create a safer Santa Clara, while city officials acknowledged that some of it may be “controversial.”

Santa Clara’s Bicycle Plan aims to grow the city’s bicycle network from 70 miles of bike-friendly pathways today to 142 miles in the future. The city has created goals to raise the number of commuters who bicycle to 5 percent by 2026, compared to the 1.8 percent who commute by bicycle in the city today. Look at a map of the current and planned bicycle network here.

“It’s intended to be all-encompassing, dealing with all sorts of residents and workers and really one of the focuses here is they can easily and comfortably ride,” said Michael Liw, assistant director of Public Works.

Cycling enthusiasts came to the City Council meeting Tuesday night to throw their support behind the plan. Some also encouraged the city to adopt a “Vision Zero” plan by next year, rather than its stated goal of 2024. Vision Zero plans aim to fully eliminate roadway deaths.

“The plan before you tonight reflects the desires of many for a safer and more active Santa Clara,” said John Cordes, an advocate with the Silicon Valley Bicycle Coalition. “This plan demonstrates how forward-looking Santa Clara can be tackling the important challenges of our time.”

And while councilmembers unanimously approved the plan, some acknowledged that not all residents in the city support increasing the number of bikes on the road.

“Some people have very strong opinions — and I respect that — and they are detailing their case very strongly that they don’t think bikes should be on streets and that streets are for cars,” Councilmember Teresa O’Neill said.

Even so, others are passionately pushing for change to the city’s current infrastructure, she added. “If you listen to what the teenagers are telling us, it’s like they don’t want us talking about yesterday and the status quo anymore,” she said.

The plan would increase every type of bicycle pathway infrastructure in the city, from shared paths, to bicycle-only routes. It also adds separated bikeways and shared bicycle boulevards to the city — two types of bicycling infrastructure that don’t exist in Santa Clara now. 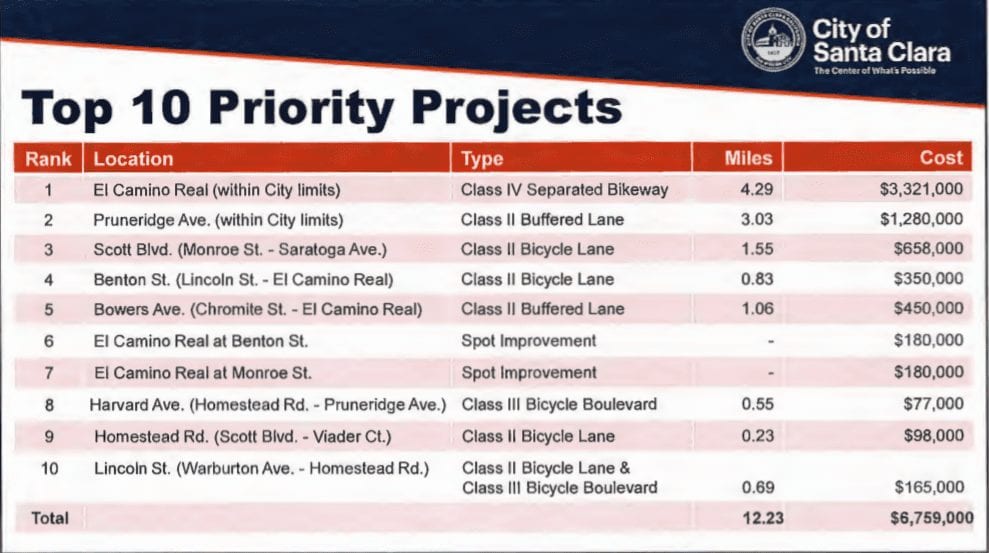 City planners offered up a preliminary set of ten priority projects they hope to see happen by 2026. Those priority projects come to nearly $6.76 million in improvements and would add more than 12 miles of bicycle infrastructure in the city.

But just because the plan is approved, that does not mean that the city is going to begin construction immediately, assured Craig Mobeck, director of public works.

“This is a bike plan, it doesn’t mean we are approving all these projects today,” he said. “There is certainly a process that goes along with the bike plan and we need to come back through the budget process to propose projects to get into the budget.”

Planners will be looking for some money to come from the city’s capital improvement budget in the future, but will also be applying for outside grants to move projects along.