Santa Clara
by Janice Bitters
Santa Clara Mayor Lisa Gillmor and former City Manager Deanna Santana are pictured in this file photo from the 2019 State of the City speech.

San José Spotlight spent months reviewing the contracts after the Santa Clara County Civil Grand Jury attempted an investigation into the matter, but could not finish because jurors struggled to get information from the city.

The Singer Associates contracts were finalized in Feb. 2018, less than three months after elected leaders agreed to pay PR firm Banner Public Affairs for work done without a fully executed contract, an issue that delayed billing, payments and hampered the city’s ability to manage the consultant’s work.

And work started early again with Singer Associates, according to billing statements.

City leaders also increased the value of the contracts by a combined $100,000 between soliciting proposals and awarding the contracts. Documents obtained by this news organization paint a picture of a rushed process in which potential bidders had just 11 days to respond and only one bid was submitted, rather than the three required by the city’s code. The lone bid from Singer was submitted the day city officials closed the bidding process.

The city’s request for bids, known as a Request for Qualifications, isn’t posted online though that is a best practice in the government procurement sector, multiple experts told San José Spotlight.

“The Santa Clara system just isn’t transparent and open as it should be,” said Professor Christopher Yukins, co-director of the government procurement law program at George Washington University Law School. “I’ve spent a lot of time looking at different procurement systems, different laws, different opportunities and systems really around the world, and this one was just remarkably non-transparent.”

The two contracts didn’t go to the City Council for approval because city rules allow City Manager Deanna Santana to sign off on such contracts not exceeding $100,000 — a longstanding rule. One $100,000 contract was for communications services for the city while the other was for up to $100,000 in services for the Stadium Authority, which is overseen by the city.

Notably, Pete Hillan, a principal with Banner Public Affairs who in 2017 also billed the city for work before a contract was finalized, joined Singer Associates about six months after the firm won the bidding process.

When city officials two years ago discussed starting fresh after the haphazardly executed Banner Public Affairs contracts, Santana told elected officials during a public Nov. 2017 meeting she intended to seek out a new PR firm through a competitive process.

When the request for bids came out, the city sought to award two PR contracts not to exceed $50,000 each, the bidding documents show. But Singer’s contracts awarded later that month ended up being $100,000 each.

Internal routing sheets attached to each contract show a different dollar amount had initially been written in for the contract amount — but was whited out and changed to $100,000. The change was described as a clerical error to the Mercury News last year. 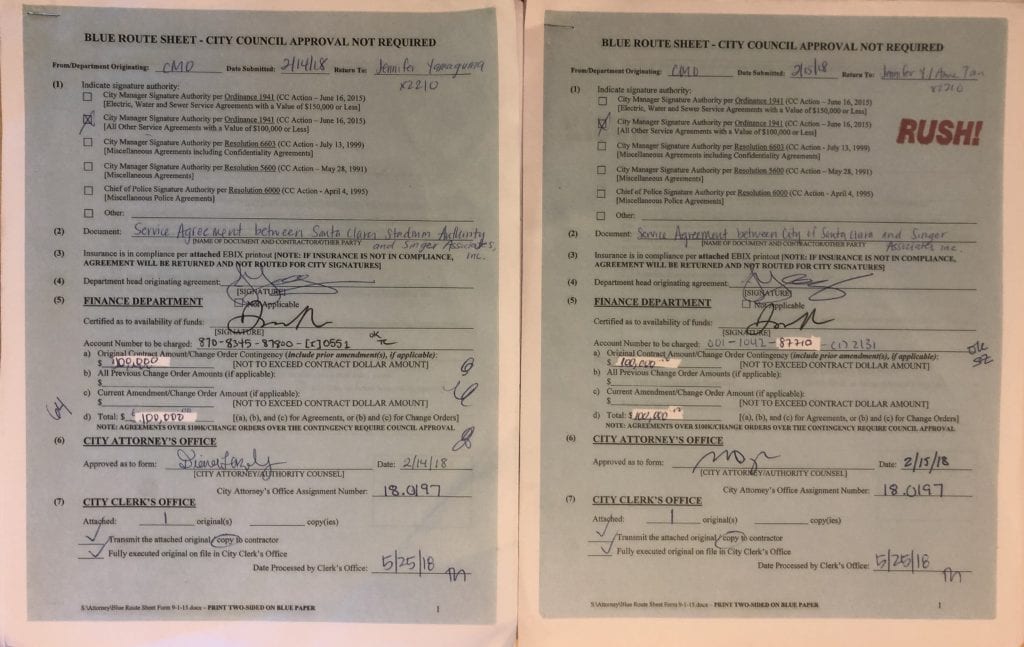 But Santana said in a statement to San José Spotlight that the value of the contracts were increased when “it became clear that the city of Santa Clara’s and Santa Clara Stadium Authority’s communications need was much greater than initially identified,” primarily due to staffing turnover. She added that doubling the value of the contracts after a bidding process began “does not constitute any irregular procurement practices.”

The city in June quietly extended the contracts with Singer that were set to expire earlier this year because officials had not yet used $200,000 worth of PR services between the two contracts. Both contracts will now end in June 2020.

The shortened timeline and a single bid

City officials said closing a formal solicitation that quickly wasn’t typical, though there were no rules against it.

Though the city’s code requires three bids in a formal solicitation for contracts exceeding $50,000, a city official said “it’s impossible to guarantee that we can receive a minimum number” for every bid request.

Advertising solicitations to local businesses is a problem for Santa Clara, Mark Giovannetti, the city’s purchasing division manager, told councilmembers this year.  “We’re invisible,” he said. “I don’t think they know about us, what we buy, how they can be eligible to be awarded our business.”

In response to questions about the award process and how he learned about the request for bids, Sam Singer, owner of the firm, said in a general statement that his company is often “sought out by government agencies and corporations to assist on issues of importance,” because of its track record.

Adam Alberti, a Singer Associates partner, signed the contracts by the end of January, but city officials waited until Feb. 14 to sign the Stadium Authority contract and Feb. 15 to sign the city one, according to the routing sheets.

But billing statements show Alberti billed the city for 30 minutes for “discussion and strategy re: curfew issues” on Feb. 8, about a week before the city processed the contract, according to documents. The city’s code says that contracts valued at $5,000 or more require written agreements prior to work being performed.

The meeting doesn’t show up on public calendars that certain officials — including the city attorney, city manager and councilmembers — are required to keep to reflect such business meetings. City officials said they don’t know who Alberti may have met with, and suggested it could have been an internal discussion at Singer Associates.

Officials said the city attorney’s office confirmed at the time “there was no risk to the city with the consultant starting the work,” because Singer officials signed the contracts.

But in 2017, when the city grappled with the fallout of the botched Banner Public Affairs contract that wasn’t finalized before work started, City Attorney Brian Doyle told councilmembers he was “really working on” the issue of work starting before contracts are signed, adding “I really don’t like it.”

Both Mayor Lisa Gillmor and Councilmember Teresa O’Neill said last week that they weren’t knowledgeable about the procurement process in the Singer contracts.

“The city manager told us they were going to solicit for communications assistance and she has full authority to solicit bids,” Gillmor said in an interview Friday.

O’Neill said it raises “red flags” for her if the city did not follow best practices or changed the contract value after it was bid. She noted the city has made recent strides to centralize outdated processes and improve procurement practices. “We have invested a whole lot of money to try to hire people to put the right kind of structure in place,” O’Neill said.

Hiring Singer for the two wide-ranging public relations contracts doesn’t appear to have been well-known to the public until months after the contracts were signed.

In May 2018, the city leaned on the PR firm, which specializes in crisis management, to deal with the fallout from former Councilmember Dominic Caserta resigning due to sexual harassment allegations from former students, leading some to believe at the time that was why Singer had been hired.

That same week, the city declared victory in a high-profile fight over rent at Levi’s Stadium with the San Francisco 49ers, conducting TV interviews and appearing in local newspapers. But team officials used the announcement to direct attention to the contracts, suggesting something was amiss. Notably, Gillmor and the 49ers have had a publicly contentious relationship for years.

That’s what prompted Anthony Becker, a longtime Santa Claran, to ask the Civil Grand Jury to look into the contracts last year, telling jurors, “where there’s smoke, there must be fire,” he said.

“I think this is a political spin doctor that they’re using taxpayer dollars for and they’re doing it on separate contracts so it doesn’t have to go through City Council,” Becker said in a recent interview. “They don’t have to vote on it and the public doesn’t have to know about it.”

If that charge were found to be true, it would be in violation of the city’s code. A Santa Clara County Civil Grand Jury attempted to investigate the city’s procurement procedures, seeking information about the Singer contracts, along with documents related to Banner Public Affairs. But the Grand Jury ran into months of roadblocks in its investigation, prompting jurors to instead take a closer look at the city’s compliance with the California Public Records Act.

Santana last week claimed that jurors had cleared the city of wrongdoing when it comes to the Singer contracts during a private meeting, despite the report stating the grand jury couldn’t complete that investigation.

Editor’s Note: This story has been updated to reflect that the city violated part of its city code, not its city charter, which is a separate document. Both documents are written rules by which the city must abide.