Following three new reported deaths and a jump in coronavirus infections, Santa Clara County officials on Monday released long-awaited information about how many people have been tested for the virus so far, but they still don’t know how many tests have been given outside the county’s facility.

The county’s Public Health laboratory has tested 1,044 samples for 647 patients as of Sunday, according to county officials. Across the county, 321 cases of the virus have been confirmed — a number made up of both the county’s testing and other private labs that are testing for the virus right now, though those labs don’t have to report any results that aren’t a confirmation of the virus.

As of Monday, 13 people have died from the infectious disease.

The county has not tracked any testing happening in private, commercial labs unless a confirmed case is reported. Private labs are not required to report negative results, officials said, but the county is working with the state and other jurisdictions to change that and get more information.

“The Public Health Department strongly supports expanding the availability of testing for COVID-19,” the agency said Monday. “The current lack of widespread testing capacity nationwide and locally has significantly hampered our ability to monitor the epidemic, to focus mitigation measures, and to inform individual people of their infection status. Unfortunately, local and national testing resources have not scaled to the extent that we expected, and not everyone who is ill can be tested at this time.”

Public health officials have called Santa Clara County the “epicenter” of the infection in the Bay Area, as it has more confirmed cases than other parts of the region. But even with 321 people testing positive in the county, officials say testing has been limited.

Santa Clara County can do about 100 tests per day, but some of those are used as controls and multiple samples are sometimes submitted for a single patient to ensure accuracy.

As a result, the county is focused on testing hospitalized patients, health care professionals and first responders as they “continue waiting for large-scale testing capacity to come online through the commercial labs,” which is often done by the private sector in the United States, according to the agency.

Meanwhile, private organizations like Stanford, Alphabet-owned Verily, Quest and most recently Sunnyvale-based Cepheid, are also running tests in the region and each are ramping up in testing capacity, county and state officials have said. But how much is still unclear.

But it’s not just Santa Clara having difficulty getting tests moving.

Across the state, testing numbers are low, currently sitting at about 26,400 total given. Gov. Gavin Newsom said Monday during a live stream that the state is implementing a set of new “protocols” for testing. By Wednesday, he said, there would be a “reset” on the total number of tests given and testing would increase “significantly.”

For now, Santa Clara County health leaders estimate the number of people infected in the county will rise.

“The increase in confirmed cases over time, as well as several other data points, indicate that the virus is now widespread in our county,” officials said Monday.

Governor Gavin Newsom and state health officials will provide an update today on the state’s response to the COVID-19 outbreak.

County officials released data about the ages, genders and medical histories of people who have died from the virus. The majority of victims, about 69 percent, were men above the age of 61. Sixty-two percent had pre-existing medical conditions. 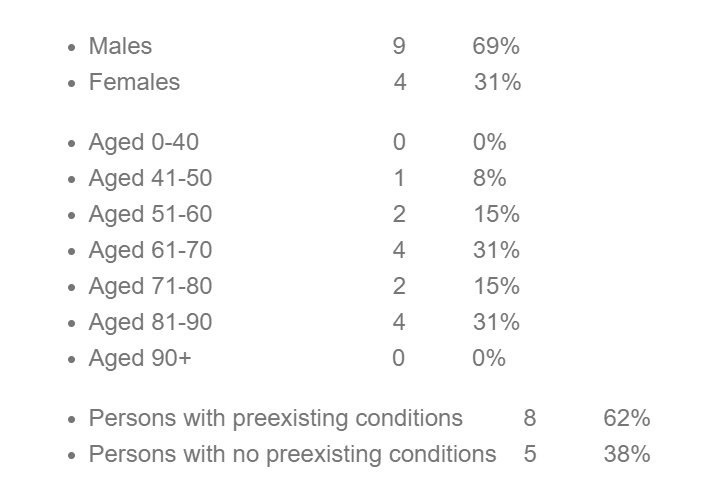 Many of the 125 new cases reported in recent days include “essential” government employees and first responders.

San Jose officials confirmed an employee in its Planning, Building and Code Enforcement department had tested positive. Across the city, 13 firefighters, one reserve police officer, five TSA officers at the San Jose airport, one airport employee and, as the Mercury News reported Monday, one worker at the city’s wastewater plant have tested positive to date.

On Monday, Santa Clara County Sheriff’s Office confirmed three of its deputies have also been diagnosed with COVID-19. One deputy is in stable condition at a local hospital while the other two are currently self-quarantining at home.

“We want to assure the public that our office remains dedicated to serving and protecting the community during these trying times,” a news release by the sheriff’s office states. “Furthermore, we are doing everything we can to protect our staff and other first responders battling this pandemic.”

The news came the same day the Sheriff’s Office confirmed that one inmate at the Main Jail in San Jose had tested positive for the virus.

Newsom on Monday said he’s been in talks with county sheriff’s offices around the state to “augment” intake processes and transfer protocols between jails and prisons during the outbreak to prevent the spread of the contagious virus.

“We have very strong isolation protocols,” the governor said. “We have programs and procedures around infection.”