Santa Clara County Supervisor Dave Cortese, who is running for the California Senate, is facing criticism from opponents over a new campaign email that some say appears to blur the lines between his campaign and official resources.

The email, sent late last month, comes from a campaign email address — [email protected] — but features a headshot of the longtime lawmaker with his official supervisorial title. It asks recipients to complete a four question survey about homelessness, and lists the supervisor’s official email and office telephone number at the bottom of the email.

But the fact that the official email was sent from a campaign email account has some critics suggesting that Cortese might be using his elected office to campaign and collect email addresses under the guise of this homelessness survey. 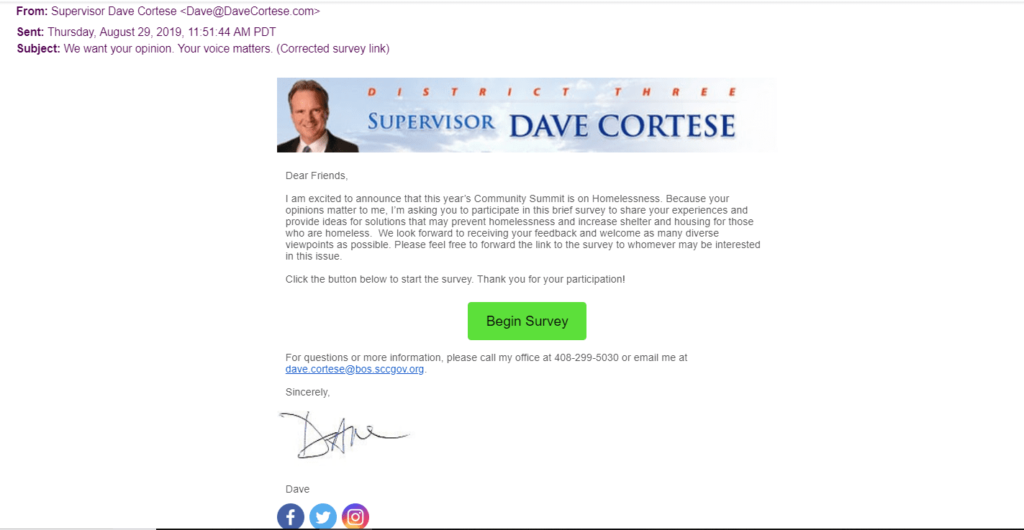 “I was a bit surprised to see that he’s used the campaign account but never identifies himself as a candidate,” said John Sims, a professor of law emeritus at the University of the Pacific McGeorge School of Law in Sacramento. “As he’s done it, there seems to be at least some question of whether he is misleading the recipients, if in fact he is using his current supervisor status to induce those getting the email to respond. I agree that having those email addresses would be valuable to the campaign.”

Although, Sims added, he is relieved to see Cortese didn’t use his official email account to try to boost his candidacy for legislative office. That would be more troubling, the longtime political expert said. “Then there might be a problem from using government resources for campaign purposes,” he added.

In response to the criticism, Cortese said his davecortese.com website is a private email server and domain that’s not connected to the county server.

“I own it personally. In this way, just like on any other private email, I can use it for public, private or campaign information dissemination,” Cortese told San José Spotlight. “This has all been vetted by county counsel. I’ve been using it in this way since I purchased the system as a privately-owned domain over 20 years ago.”

As for collecting emails from the surveys for his campaign, Cortese said that information is submitted directly to the county office and becomes public information. “They are not collected by the campaign, but by the county District 3 staff,” he said. “If they are retained they become public record and any member of the public could request them.”

California Fair Political Practices Commission spokesman Jay Wierenga said a potential misuse of public funds is not investigated by his agency, which primarily focuses on misuse of campaign funds, but that “there’s no requirement that a campaign email address has to be used just for a campaign.”