After winning Nevada and Pennsylvania four days after the election, Joe Biden defeated President Donald Trump on Saturday and will become the 46th president of the United States with Kamala Harris, the first woman Vice President, by his side.

With victories in those two states, the former Vice President under Barack Obama harnessed a total of 279 electoral votes, pushing him past the 270 vote-minimum needed to beat Trump.

“America, I’m honored that you have chosen me to lead our great country,” Biden tweeted Saturday. “The work ahead of us will be hard, but I promise you this: I will be a President for all Americans — whether you voted for me or not. I will keep the faith that you have placed in me.”

Silicon Valley leaders from both sides of the aisle reacted to the news that America ousted its president for the fourth time in history.

Mayor Sam Liccardo called it a “moment of healing across our divided nation.”

“President-elect Biden will provide the leadership and character to bring our country together and move forward—but whether we are willing to come together depends on each of us as much as it depends on them,” Liccardo said. “May we all rise to this moment. May we also celebrate the historic achievement of our Bay Area’s own Kamala Harris, to become the highest ranking woman to serve our nation in its history.”

This is a moment for healing, across our divided nation, and in each of our hurting communities. @joebiden & @KamalaHarris will provide the leadership and character we need to bring our country together and move forward. https://t.co/q6x0J4yYtI

“We’re particularly excited about Kamala Harris, just because she represents so much of what is good about California and she’ll now have this opportunity to show that on the national and the world stage,” James said. The California senator made history as the first woman vice president, the first Black vice president and the first Asian vice president.

“It’s historic,” James said. “It is so great for girls and young women of color and America.”

Earlier this morning, the Santa Clara County Democrats and Republicans duked it out on Twitter.

In response to a tweet by Ivanka Trump, the Santa Clara County Democratic Party said it was glad to see so many “evil” people leave the White House.

This fueled the ire of local Republicans, who suggested the local Democratic Party was morally and ethically stunted for having such a view.

“We have seen the horrific outcome of such thinking,” the Silicon Valley GOP wrote. “Lets all strive to be better than this.”

There’s definitely something wrong with your moral and mental processes if you view your political rivals as “evil”. We have seen the horrific outcome of such thinking. Let’s all strive to be better than this.

But some local Republicans say the election isn’t over yet.

“Folks were insisting that we count all votes, that hasn’t been finished yet,” said Santa Clara County Republican Party Chair Shane Patrick Connolly. He said there have been 25,000 calls about voter fraud made to the voter integrity line set up by the Republican National Committee.

“Obviously, that’s a huge task to go through those to find out which are credible, which are not actionable and which are actionable,” Connolly said.

Despite the win for his party, James said there is still uncertainty around what Trump and his supporters will do.

“We don’t need him to concede. The Constitution doesn’t require that and we’re not expecting a whole lot of positivity from him,” James said. “It is an anxious time and we will be relieved and happy when we see President Biden and Vice President Harris in office and taking the reins of power.”

In Washington D.C., thousands of people packed into the Black Lives Matter Plaza to celebrate Biden’s win. They held signs, chanted “lock him up” and raised a banner that said “Arrest Trump.” 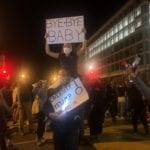 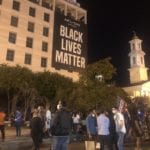 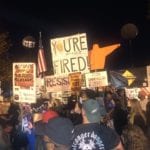 During the celebration, people held up 'you're fired' signs. Photo by Katie King. 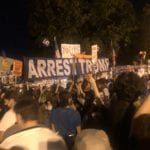 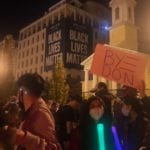 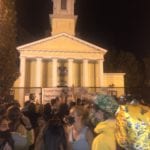 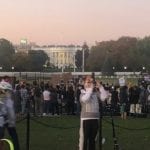 Suzanne Beckett, a stay-at-home mom from Baltimore, joined ranks of Biden supporters at a rally near the White House and the Washington Monument.

The rally was peaceful and without protest.

“I want peace in this country, and I believe Biden and Harris can do it,” Beckett said, holding a Biden-Harris sign. “They can bring peace and safety and harmony for us to get back to work and school and life.”

Mona, a resident of Alexandria, Virginia, who declined to give her last name, said she will be happy to see Trump out of office.

“I think Biden will be completely different in regards to immigration and racism,” she said. “I think Biden is going to take over and I’m hoping for him to bring back peace to the country. No more hate.”

Ian Broverman from Germantown, Maryland, said he attended the gathering for closure.

“I’ve been to a lot of protests down here,” Broverman said. “I’m looking forward to a return to sanity.”

“This is a historic victory for our new President-elect and Vice President-elect for many reasons, but primarily the record number of votes cast and the election of the nation’s first woman Vice President,” said Rep. Anna Eshoo. “It was worth a few extra days’ wait to celebrate such progress.”