With the March primary a day away, Silicon Valley candidates and their backers are pulling out all the stops and increasingly taking aim at one another in a slew of political ads.

A barrage of campaign mailers, television ads, emails, phone calls and social media posts have inundated voters in the weeks before the election, meant to win over last-minute uninformed or undecided constituents in some of Silicon Valley’s most closely-watched races.

But several ads  — financed by powerful business and labor groups — contain misinformation or resort to personal attacks and smear tactics on their opponents. Here are some of the most notable ones. 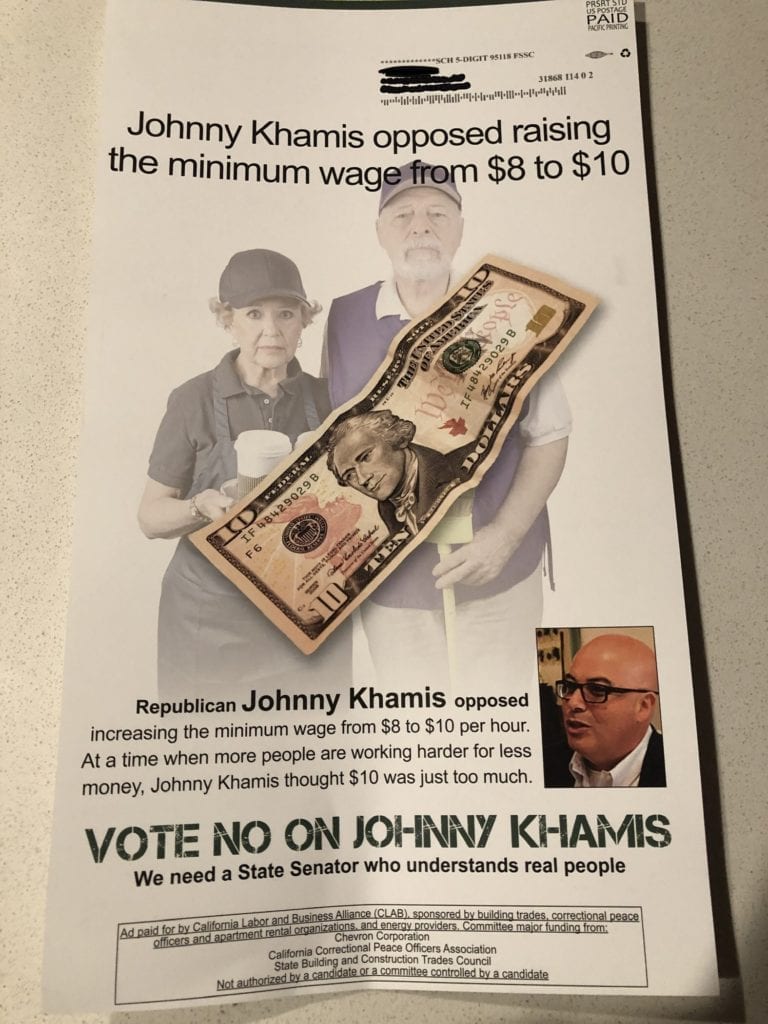 Shots were fired at state Senate hopeful Johnny Khamis in recent weeks when Chevron and labor-backed lobbies released ads criticizing the District 10 councilmember for his “ultra- conservative” views on minimum wage and the environment.

The ad was also funded by the California Labor and Business Alliance, the California Correctional Peace Officers Association and the State Building and Construction Trades Council.

Khamis acknowledged he didn’t support raising the minimum wage in 2012 — the year he decided to run for office — and still doesn’t, as he said many small businesses have had to close because of increased minimum wage requirements. Additionally, the issue went to the voters to decide that year — and not the City Council.

“The people who end up paying for it are the consumers,” he said. “It did hurt a lot of mom-and-pop shops and that’s why I was opposed to it.” 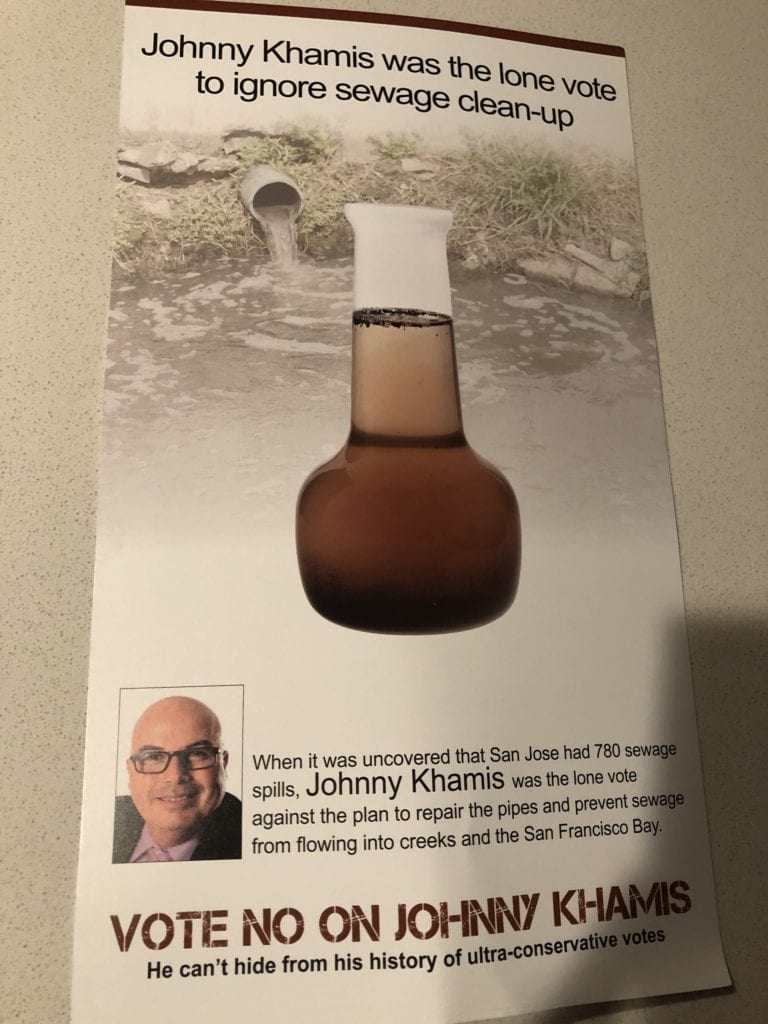 On the back of the mailer, Khamis was criticized for being the “lone vote to ignore sewage clean-up.” Khamis called it a “low blow” and said it didn’t represent his work on environmental issues. After the city settled a lawsuit with the environmental group San Francisco Baykeeper in 2016 over pollution in city creeks, Khamis voted against awarding a $100 million taxpayer-funded settlement to the group — because $10 million of those funds would pay for attorney fees.

“I’m not opposed to cleaning up the streams, but (the settlement) included $10 million for lawyers,” he said. “In the end, it’s going to come out of our sewer fees — I’m doing my best to protect people’s money.” 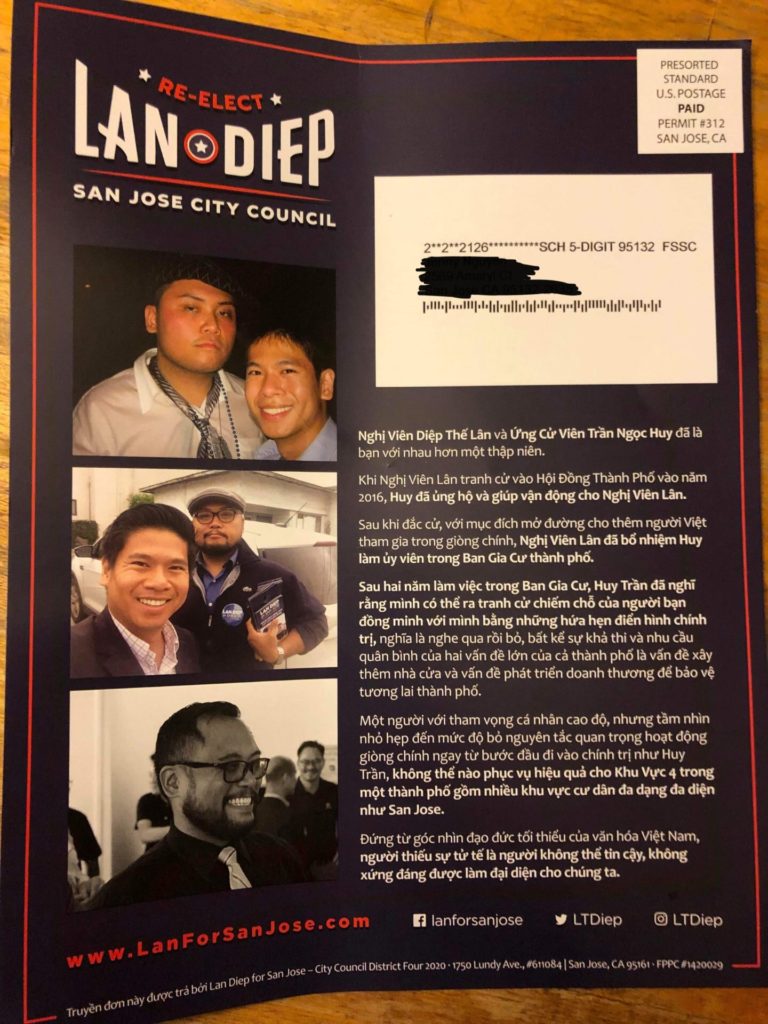 Hundreds of thousands of dollars are being poured into the San Jose City Council District 4 race, as two labor-backed candidates aim to unseat business-friendly incumbent Lan Diep. Among the attacks, Diep’s campaign sent mailers against one challenger, employment attorney Huy Tran, targeting him for turning his back on Diep as a friend — a criticism Tran claims is an unnecessary character assassination that has nothing to do with running for public office.

Sent in Vietnamese, the mailers’ message is roughly translated to: “Diep and Tran were friends for more than a decade. Tran supported and campaigned for Diep, who appointed him to the Housing Commission. Now, Tran thinks he could run and take the seat of his friend and ally. In Vietnamese culture… a person lacking in respect is a person that can’t be trusted.”

But the mailers, Tran said, didn’t come as a surprise.

“We expected this, and that’s why I am not focused on these petty attacks,” Tran added. “Lan’s attack against me was personal commentary about our relationship — we should be focused on solving the issues impacting our residents rather than his personal feelings towards me.” 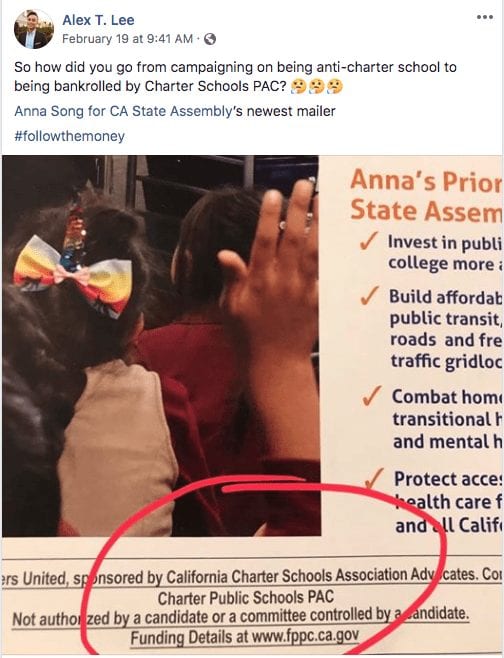 Longtime education trustee Anna Song, who’s running for Assemblymember Kansen Chu’s seat, has been under fire from critics who claim she’s pocketing money from charter school PACs, while running on the platform that she’s a longstanding public education advocate.

The uproar has resulted in several supporters rescinding their endorsements and accusing her on social media of selling out to the charter school lobby.

But the funds in question — $92,325 — were an independent expenditure by the California Charter Schools Association to support Song, which means she did not coordinate with the group and the money didn’t go into her campaign coffers.

“I don’t know how I was going to sell out myself — I didn’t know this was going on,” Song said. “I want the voters to understand that there’s campaign finance law and a contribution limitation. I cannot accept this kind of money — all of their accusations are false.”

The charter school PAC that had previously spent nearly hundreds of thousands of dollars campaigning against Song now piled funds to boost her campaign by sending mailers supporting her — a move she thinks stemmed from losing the endorsement from the rival lobby, the California Teachers Association (CTA), over a controversial vote.

The controversy started when the Franklin-McKinley School District rejected Cornerstone Academy’s charter renewal months before the Santa Clara County Board of Education appealed the decision. The school was accused of not catering to Latinos and disabled students.

Song believes CTA rescinded its support after she voted in favor of appealing the contentious decision, but said the CTA hasn’t given her an explanation. Neither the California Charter Schools Association nor the California Teachers Association could be reached for comment. 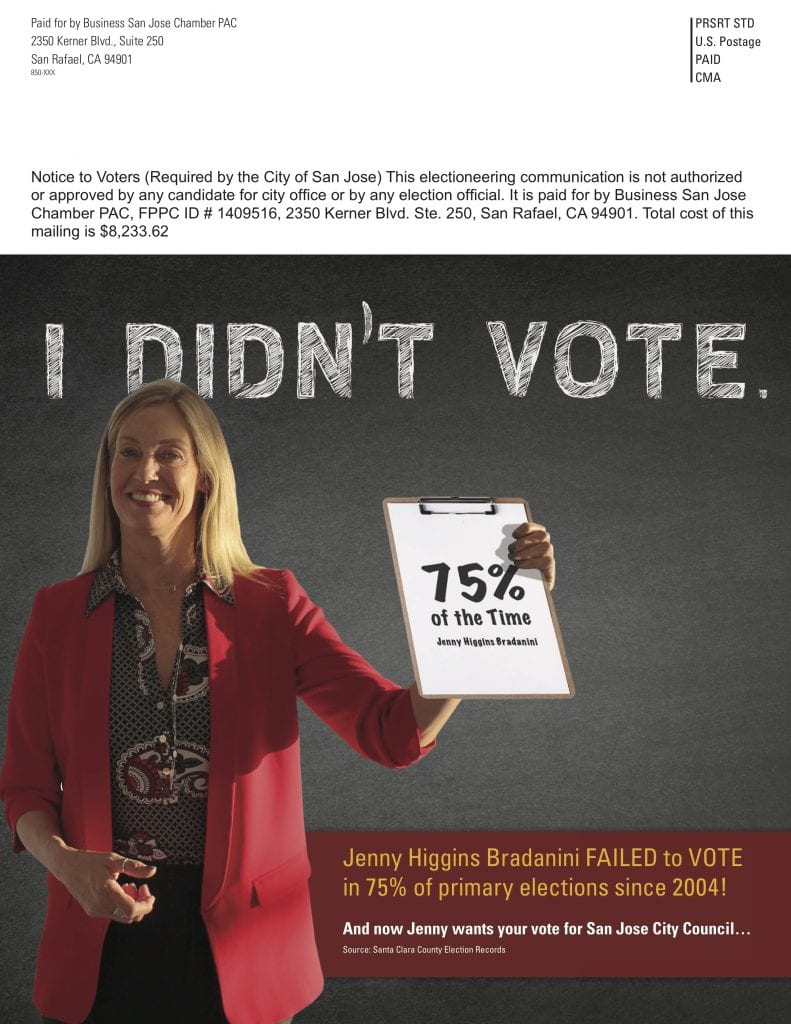 Higgins Bradanini called the ads, which cost about $16,000, a “feeble attempt” to discredit her.

She acknowledged she missed voting in some primaries, but said she was a working mom involved in community service while caring for a sick stepfather. Higgins Bradanini added that for many years women like her were “boxed out” of politics.

“I’m not from the political class, I’m from the neighborhood,” she said. “I’m disappointed that they chose to spend a large amount of money to attack me instead of lifting up their candidate. They must be worried about my experience and connection to the community.”

Victor Gómez, who is a consultant for the Business San Jose Chamber PAC, defended the ads, claiming they did not attack but informed.

“Our biggest concern are the critical votes that she missed,” he said. “When people care about issues they should care about voting — that’s the biggest way to voice a position on candidates and measures.”