BusinessSanta Clara County
by Adam F. Hutton
An aerial image of a part of the city of Santa Clara. Photo by The 111th Group.

The lowest wage earners across Santa Clara County will get a boost in pay in 2020, with workers in Sunnyvale and Mountain View due to get the biggest bump as both cities increase their minimum wages to $16.05 in January.

And San Jose, once a leader in raising the minimum wage, will fall in last place compared to its neighbors that set their own wages.

“I’m really proud for Sunnyvale to be at the top,” Fong said.

“But I also wish we were all at the same rate,” the 28-year-old lawmaker told San José Spotlight, referencing a failed 2016 attempt to get South Bay cities to raise the pay floor together ahead of the rest of California — given the exorbitant cost of living in Silicon Valley.

As the son of a small business owner, Fong said he has mixed feelings about minimum wage increases, which can be hard on immigrant business owners, but as a policymaker, he prefers a regional approach.

“The age old questions with minimum wage are how much do you raise it, and how fast do you go,” Fong said.

Mountain View and Sunnyvale, which both paid a $15.65 minimum wage in 2019, are increasing wages by 40 cents per hour to $16.05 — the highest rates in the county. Right behind Sunnyvale and Mountain View, which have tied their minimum wage increases to inflation, are Los Altos, Palo Alto, Santa Clara and Milpitas — each of which are increasing the pay floor to $15.40 an hour.

That means the Bay Area’s biggest city, which was once ahead of a statewide push to increase the minimum wage, has fallen behind every city in Santa Clara County that has its own minimum wage law. 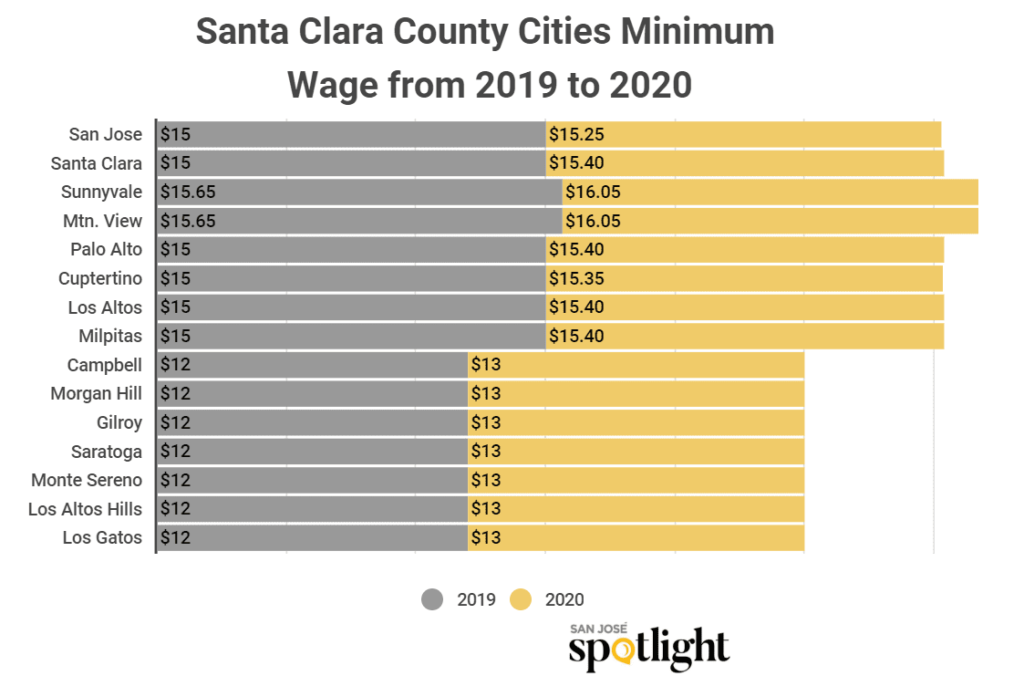 San Jose in 2012 became the first city in the county to increase its minimum wage above state levels when voters approved a ballot measure raising wages from $8 an hour to $10 an hour. More recently, the City Council led a regional push to raise the wage in unison, to avoid what Mayor Sam Liccardo called a “patchwork of ordinances” in 2015.

And although every city in the county signed on to commission a study of the impacts of raising the wage — which cost $100,000 and was completed by UC Berkeley in 2016 — only 8 of 15 decided to ultimately go ahead.

Even then, the region wound up with the patchwork Liccardo hoped to avoid, with each city setting its own timelines for increasing wages. And Campbell, Morgan Hill, Gilroy, Monte Sereno, Los Altos Hills, Saratoga and Los Gatos did not set their own minimum wages, instead paying the California minimum wage of $12. They will each go up by a dollar in 2020.

If those seven cities had joined the regional effort to increase the minimum wage, the UC Berkeley study found that at least a quarter of a million Silicon Valley workers would have seen their wages rise by 19.4 percent, or $3,200 per year.

The federal minimum wage is $7.25 an hour, but most states and Washington D.C. have their own minimum wage laws that set the floor higher. Washington and California next year will have the highest minimum wages in the nation with $13.50 and $13, respectively.

A recent study by the Brookings Institution’s Metropolitan Policy Program found that contrary to popular belief — minimum wage workers are not just teenagers with little experience, but 44% of the American workforce between the ages of 18 and 64. The median wage for those workers is $18,000 a year.

“Housing prices in Silicon Valley are so inflated that it doesn’t make much difference,” Truong said. “It mostly hurts small businesses because it creates an artificial cost inflation. Ultimately it cuts into the paychecks of working class and low-income families when goods and services are more expensive.”

But there’s no evidence of that, says Scott Myers-Lipton, a sociology professor at San Jose State University whose students organized the 2012 campaign that led to a $2 minimum wage hike. He noted that the Berkeley study commissioned by San Jose and the Cities Association of Santa Clara County showed a very modest increase in costs to consumers, but no effect on jobs.

When San Jose was first to raise wages in 2013, Myers-Lipton said, the outcry from the business community was that “people would drive to another city to buy a hamburger.”

But that didn’t happen. Instead “jobs grew by the thousands,” the professor said, and other South Bay cities matched, and then surpassed San Jose’s minimum wage and the state committed to increasing the minimum wage to $15 an hour by 2023.

“We live in a capitalist system and we know its benefits,” Myers-Lipton said. “But we have to examine its drawbacks to help ameliorate problems like capitalism doesn’t generate enough housing, or living wage jobs.”