While leaders across California continue to pump millions of dollars into increasing the state’s housing supply, scrambling to address a shortage of affordable housing that’s pushing residents into the streets, some local leaders are calling on their fellow colleagues to implement new ways to make it easier to build.

Now, San Jose Councilmember Raul Peralez is calling for the city to beef up its existing housing dispersion policy by implementing a stronger enforcement mechanism to force city leaders to approve low-income housing across the city, not just in a few districts. Peralez’s District 3, which covers downtown, has the most affordable housing in the city.

The goal of the existing policy is to scatter low-to- moderate income housing throughout all neighborhoods of San Jose, ensuring that no part of the city is off-limits to affordable housing. But Peralez says the current policy has no teeth because residents can fight back against a project, inevitably killing it before it can be approved. And there are no repercussions.

“We have a policy that sort of says, ‘Hey, we have to disperse this,’” Peralez said in a recent interview with San José Spotlight. “But right now, so many communities feel emboldened to say, ‘Oh, I can just fight back and push this — it’s not going to get built in our neighborhood,’ and I don’t think that’s fair to the neighborhoods around the city that end up getting the lion’s share of the development.”

A recent analysis by San José Spotlight found the city isn’t anywhere near completing Mayor Sam Liccardo’s ambitious goal of building 10,000 new affordable housing units by 2022. Currently, the city has built only 245 of those units, with 1395 units in the pipeline — most of them in the city’s downtown core.

The problem, Peralez added, is that affordable housing projects are considered as a recommendation in San Jose — not a requirement. The city needs to find a way to enforce construction of low-income housing in districts where it’s proposed — despite community pushback. 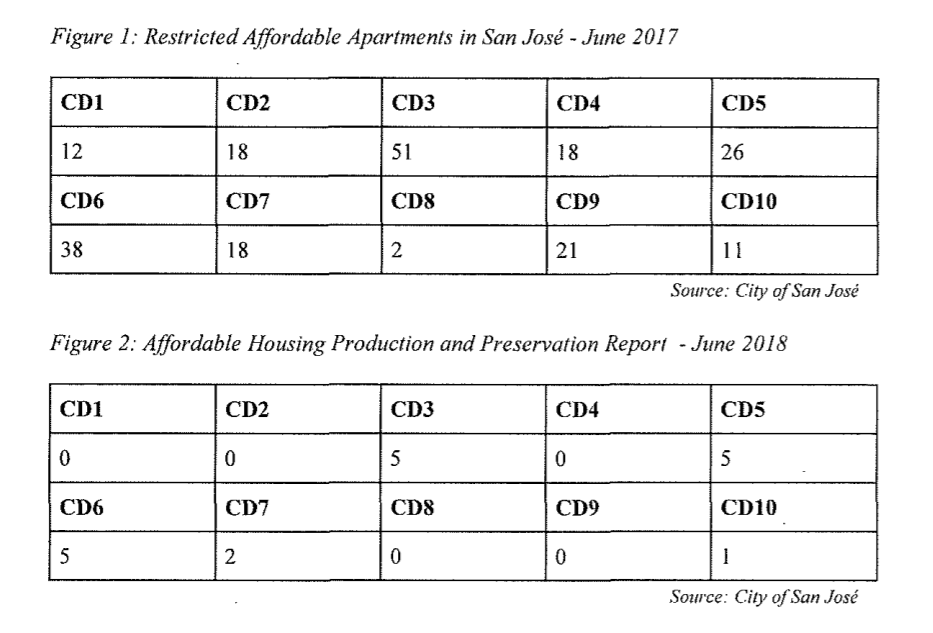 According to a memo from Peralez, the majority of affordable housing projects as of June 2017 were in his district, as well as District 6, which covers Willow Glen and the Rose Garden, and District 5, which spans East San Jose. Four districts — nearly half the city — had no affordable housing projects in the pipeline, the memo showed, including districts 1, 2, 4, 8 and 9.

District 2 Councilmember Sergio Jimenez, whose district is currently exploring the possibility of an affordable housing project for seniors, said he’s open to having his district take on more projects, but that it “seems natural” for downtown to take on the bulk of the projects, because there are more homeless individuals there.

“I’m committed to make certain that District 2 does its part in helping move some of these complicated issues forward,” Jimenez said in an interview with San José Spotlight. “Downtown takes the bulk of these projects — but that’s where people who need the housing are already. It seems natural that based on where the folks that we’re trying to house are, that we would have more in downtown.”

Still, Jimenez said no single district should be “overburdened” by too many projects, and generally supports the idea of a stronger policy.

“I don’t desire for any one district to be overburdened — it shouldn’t be all in downtown,” he added. “We’re one city and I do support the idea that other districts should do their part.”

Peralez’s proposal also called for mandating developers of market-rate projects to build affordable housing on site — instead of paying an in-lieu fee — if an area lacks affordable housing. The continued shortage of affordable housing in certain areas, the lawmaker said, will “further segregate our communities, deepen our growing economic inequality and threaten the cultural livelihood that makes San Jose the great city that it is.”

The second idea from Peralez is preventing an over-concentration of affordable housing projects in the same area, similar to policies that mandate only a certain number of liquor stores within a specific radius of each other. The liquor store policy is meant to protect against crime and loitering. Similarly, Peralez said the over-concentration policy would prevent against blight and the formation of run-down communities.

Corsiglia was the city’s housing director for nearly 25 years when she advocated for the city to reform its dispersion policy in 2009. But now, she said, projects that would’ve been approved years ago might not qualify for federal or state funding, as cities aim to produce denser housing around transit rather than invest in urban sprawl.

“The policy needs to be rethought because of changes that have been made over time,” said Corsiglia. “As we’ve stopped looking at lower density housing and look at housing towards transit, it changes the geography and direction of where we place housing.”

Corsiglia added that she agrees with Peralez’s call for an enforcement mechanism — but through state legislation.

“It’s not teeth, it’s political will. People can complain, but that doesn’t stop development from happening,” she said. “Policymakers like Raul have stood up to people who are fighting against development, saying that it’s not a question of whether or not it’s happening — but this is your opportunity to influence how.

“Teeth will come in the form of state legislation,” she added. “We need to be able to allow affordable housing by bills like SB 50, which help create more opportunities for density around transit corridors.”

Peralez is also calling for an “equitable” redistribution of city resources such as police personnel, parks maintenance, public works and security measures to reward the housing-friendly communities that incentivize building affordable housing projects in their neighborhoods. If districts like his take on more affordable housing projects, he said, they should receive more resources to support those projects.

“If we’re taking on the bulk of tiny home development, permanent supportive housing, then the services should be more equitable, and redistribute resources to the districts that have taken on more of these projects because they require more — not just in funds,” he said.

The council’s Community and Economic Development Committee will discuss an update to the policy at its Nov. 18 meeting. City officials expect the policy to come to the City Council early next year.