Seven prominent leaders are quitting a San Jose public safety committee after claiming it was a sham and that it failed to address police reform as promised.

The San Jose Reimagined Safety Advisory Committee, which includes 46 leaders across Silicon Valley, formed in September in the wake of the murder of George Floyd. The goal, city leaders promised, was to address concerns about community safety and draft recommendations for police reform.

But after three meetings, tensions rose and people walked out. The seven members who quit, which include high-profile leaders like William Armaline, Walter Wilson and Rev. Jeff Moore, among others, say there was a lack of structure, no focus on police reform and Black leaders were forced to prove experiences of racism.

“This is not a time to play games with me,” Wilson, who was among the first members to quit, told San José Spotlight. “The process was going to be police leading the reform. The independent police auditor, who can be fired, will oversee them and the city manager is going to get the final word.”

“This was both shocking and infuriating—during a debrief on the conviction of George Floyd’s murderer no less—and a rather disappointing commentary on the readiness of some Board Members to take seriously any real efforts at reform,” members stated through a letter released by William Armaline. 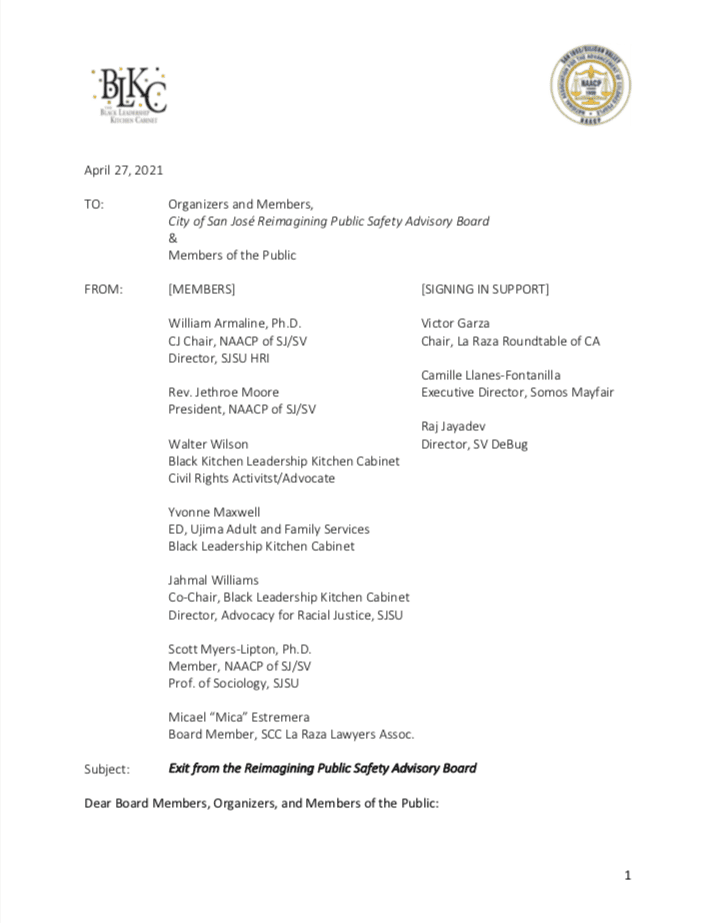 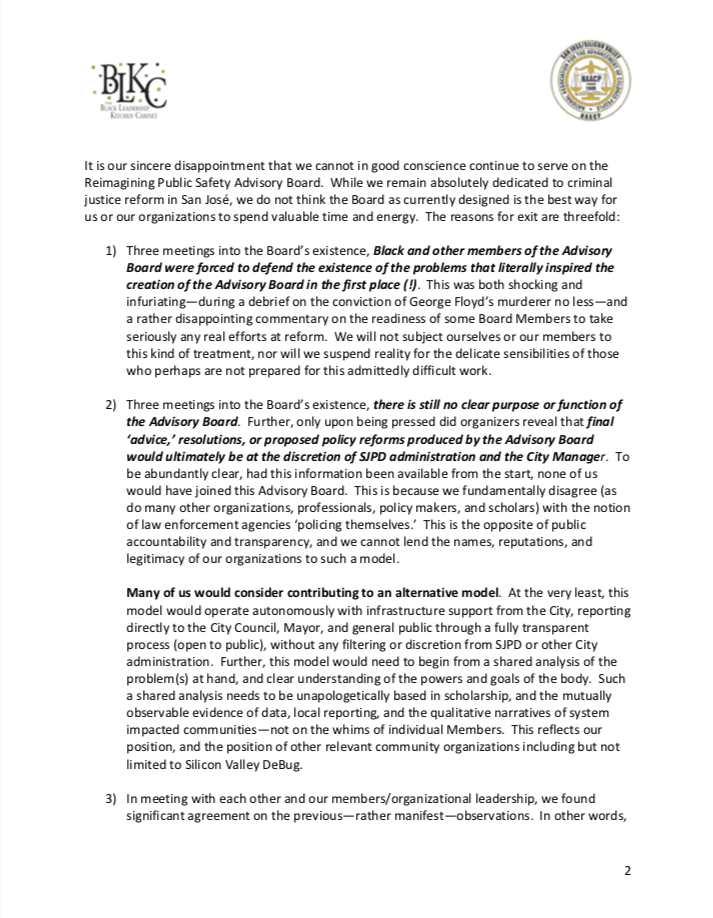 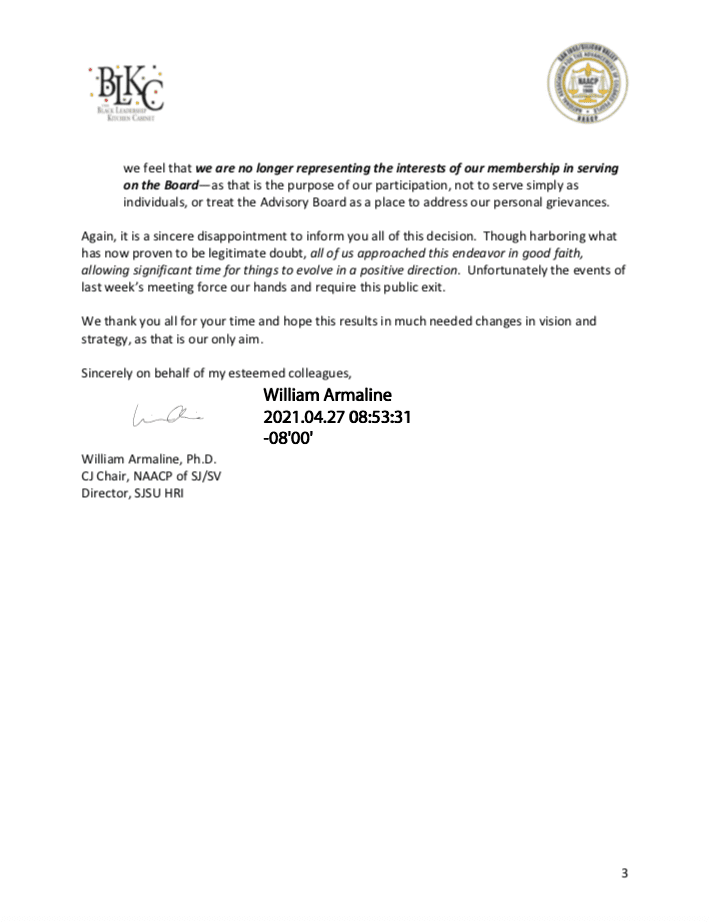 “This process has felt harmful, we are once again asking Black men to defend whether or not their reality of white supremacy exists,” Loving said. “We need to rethink this entire process and what we are trying to do here. I’m not sure what we’re trying to do. Today has been very disturbing.”

Many raised concern about the committee’s purpose by the second meeting on April 9 – fearing police reform would be just another item on a list of unrelated discussions. The now-resigned members say they would be failing to represent the interests of their organizations by continuing with the advisory group.

“We will not subject ourselves or our members to this kind of treatment, nor will we suspend reality for the delicate sensibilities of those who perhaps are not prepared for this admittedly difficult work,” Tuesday’s statement read.

City officials, who organized the committee and selected its members, defended the process by saying the group is still getting off the ground and heated debate is the only way to find common ground.

”I said from the beginning the process was going to be messy, but it was necessary to have many diverse voices in the group,” said Deputy City Manager Angel Rios. “We still have until September to really find ways to enhance community safety and work on police reform.”

The seven exiting members said they would consider an alternate plan to propose recommendations directly to the San Jose City Council and mayor – without filtering or discretion from the San Jose Police Department.

Rios said it’s unfortunate to have valuable people leave the group, but the work of enhancing and ensuring community safety will continue.

“I’ve been getting a lot of feedback from people saying, ‘Hey we’ve got to make this work,’ that’s been encouraging,” he said.

San Jose State professors Scott Myers-Lipton and Jahmal Williams were among those who exited, along with Rev. Jeff Moore of the NAACP, Ujima Adult and Family Service executive director Yvonne Maxwell and Mica Estremera from the Santa Clara County La Raza Lawyers Association.

“I thought this group would be about seeing how policing negatively impacts Black and brown communities, but it became clear that wasn’t the focus,” Myers-Lipton told San José Spotlight. “What we really want is a community-run process. This model isn’t working.”

Around 40 people still remain onboard the advisory group, though Wilson said he’s been fielding calls from other disillusioned members. He said he has yet to receive a response from any city official.

Editor’s Note: Destination: Home Executive Director Jennifer Loving serves on San José Spotlight’s Board of Directors. Additionally, SOMOS Mayfair Executive Director Camille Llanes-Fontanilla signed the letter in support, but is not a member of the committee.