Tens of thousands of households in Santa Clara County could become homeless in the next year if local, state and federal policymakers don’t enact renter protections soon, according to a new study.

“The Eviction Time-Bomb,” released by local policy think tank Working Partnerships USA and the Law Foundation of Silicon Valley, details how the COVID-19 pandemic puts more than 40,000 renter households in the county at high risk of eviction.

And because more than 60% of Black and Latinx households in the county are renters, they are the most likely to be affected.

“The time is now to stop this eviction time-bomb from happening,” said Nadia Aziz, directing attorney at the Law Foundation. 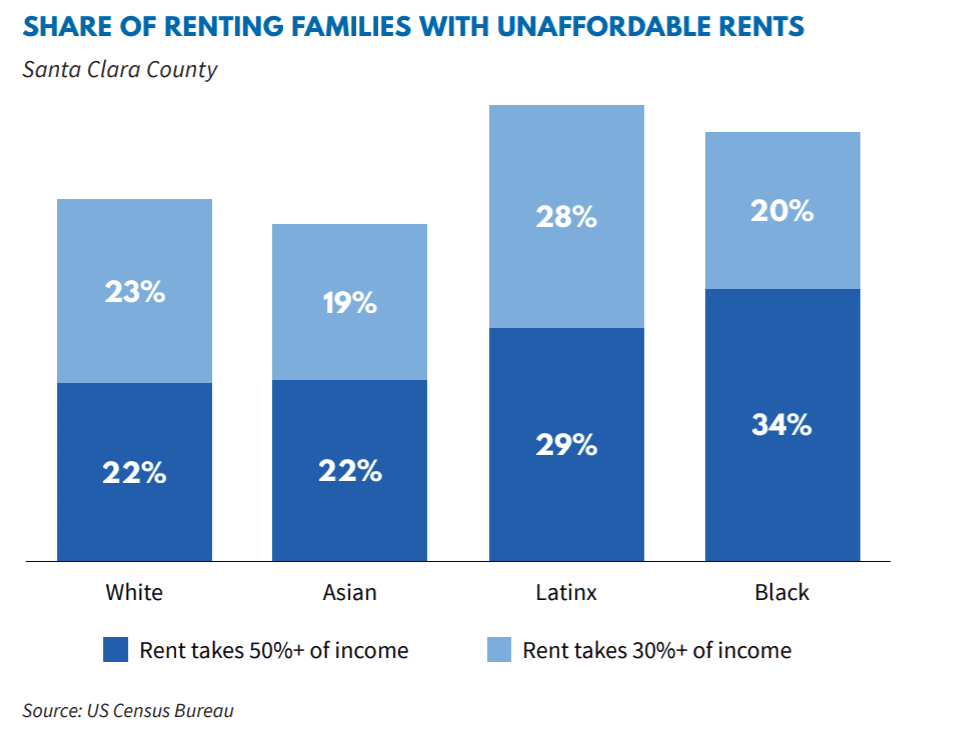 In addition, households that have been collecting unemployment insurance will soon see their incomes fall once the additional $600 per week in additional benefits expires by the end of this month.

These evictions could result in a 133% to 225% increase in the county’s homeless population, according to the study.

Sharon has lived in the community for about 45 years and is renting a room. Prior to the pandemic, she worked with at-risk youth and had a part-time job working at events. She’s found a new part-time job since the shutdown, she said Wednesday, but has still received calls, notices and threats from her landlord.

“It’s been a tough situation, being unable to make the rent and even showing the owner my letter of being laid off, which the owner thought was a fake letter,” she said.

Sharon said the consequences of a mass eviction could be fatal to the community, particularly for Black and Latinx women. According to the study, nearly 62% of tenants calling the Law Foundation for legal assistance are women.

“My fear is that this virus will erupt if all the people are evicted or put out,” Sharon said. “How do you get help? What do you do?”

A key part of the study’s calculation are the barely-affordable rents that have been a staple of Silicon Valley life prior to the pandemic. Roughly half of renter households in the county were paying more than 30% of their income on rent.  And because rents have not been cancelled, only postponed, many households will have to pay more each month to catch up on the rent they owe.

“For these already rent-burdened households, repaying three months of the median rent over a year (on top of their current rent) would take 66% of their monthly income,” the study says.

Carolina rents an apartment and lost her waitressing job during the pandemic, she said during a virtual news conference Wednesday. She’s been looking for a new job, but hasn’t yet found one, and is worried that her landlord will evict her once the eviction moratorium ends. Carolina said she doesn’t think the one-year repayment plan will work for renters, especially since most of her household bills have gone up.

“Now the kids are home all day, food is more expensive… the cost of being at home has been a lot higher,” Carolina said in Spanish through an interpreter.

Working Partnerships and the Law Foundation recommend that the county extend the moratorium through the duration of the pandemic and stop landlords from evicting tenants who are unable to repay back rent due to a loss of income from the shutdown orders. The groups also recommend the county provide legal assistance and education to renters, as well as provide tenants with rent debt relief.

“I hope that we’re able to get more time to pay the debt,” Carolina said.