Housing
by Nadia Lopez
Corrina, 56, fell into a deep depression after losing her job and being forced to sleep in a car with her 15-year-old daughter. Groundwerx gave her a new lease on life. Photo courtesy of Groundwerx.

You’ve probably seen them out before, in bright colored t-shirts and rubber gloves, pushing wheeled trash cans through the quiet streets of downtown during the day. The concept behind the work — to regain a sense of purpose, after years of living on the streets have left them with little hope.

There aren’t many waitlists that come to mind when it comes to volunteering, but at Downtown Streets Team and Groundwerx, that’s where everyone starts out. Attending the meetings gives everyone a chance to share their stories — they just have to show up at the same time, same place every week.

If they demonstrate commitment, they’re moved up the list before being given a spot as a volunteer where they go spend a few hours cleaning up the streets. Through that, they’re given housing and employment opportunities, and a chance to rebuild their lives.

Since 2011, Downtown Streets Team and the San Jose Downtown Association have formed a unique partnership in San Jose, involving homeless and low-income individuals in a program where they clean downtown’s streets and help beautify neighborhoods most affected by trash, waste and graffiti.

Participants have an opportunity to work with employment specialists and case managers to help them find housing, apply for work, and eventually, upon graduation from the program, mentor others. Many continue on to apply to open positions at either Downtown Streets Team or Groundwerx, getting paid $18 to $25 per hour.

The funding comes from the San Jose Downtown Association and city of San Jose.

Tony, 55, a native of East San Jose, had been in and out of prison several times throughout his life for gang and drug related activities. For him, Downtown Streets Team and Groundwerx helped him tap into his “strength and encouragement to move forward in life.”

“I was tired,” said Tony, who was afraid of dying in prison. “The only way you can change your life is to get a grip on it.” After two years, Tony is now in a managerial role as a team lead. Participating in Downtown Streets Team helped him become “responsible and disciplined.”

“We all have certain potentials and strengths,” added Tony. “Groundwerx helped me a lot, they wanted to give me a job and even might want to hire me. That feels good, that makes me feel like I’m valued. They keep me strong, so long as I keep focused.”

Similarly, Corrina, 56, fell into a dark place in her life after she lost her job as a supervisor at a manufacturing company. Eventually, the single mom slept in a car with her 15 year old daughter, which led her to spiral into a deep depression. 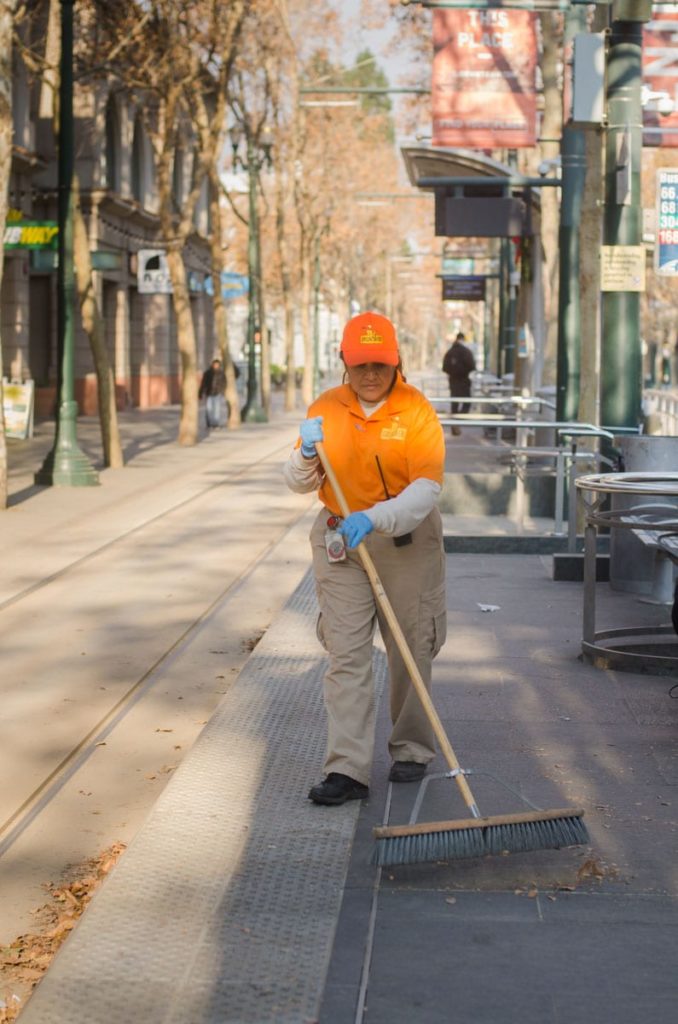 “I never thought in a million years I’d be taking bird baths in a Jack in the Box,” said Corrina, who now works as a full-time employee at Groundwerx at the highest skill performing level, operating an industrial street sweeping machine known as an ATLV.

“Downtown Streets Team — I have to say — saved my life,” she added, as her eyes teared up. “They gave me that boost I needed. After being homeless for almost a year I got housed. It was the best feeling ever when I got handed those set of keys.”

Started in 2008, Groundwerx — a program operated by The Property Based Improvement District (PBID) — provides daily services in the downtown, from cleaning and maintenance to giving out information to pedestrians. Groundwerx, while separate from Downtown Streets Team, has been able to employ former participants of the Downtown Streets Team network — currently 9 out of the 29 staff members.

Both work together to create networks that help individuals stay housed, while Downtown Streets Team continues to expand its model to more areas, apart from the 13 locations it operates in. Tackling homelessness is a challenging issue, but according to Maureen Damrel, director of Downtown Streets Team’s South Bay branch, it’s possible through a proven model.

Damrel said the work participants do isn’t easy and when people are re-housed, it helps everyone in the community — not just those affected by homelessness.

“Having to interact with people from all walks of life is no easy task. The work that they’re doing is really hard,” said Damrel. “Everybody benefits from what’s happening out there.”

“It’s really been amazing to see what a good job really can do for someone to change their life,” said Chloe Verrey, operations manager for PBID. “Stories are very different, that path out of homelessness is going to be different. When you give someone respect and treat them with dignity, that can be so transformative.”

Damrel added that by working together, both organizations strive to help participants achieve the proper education, training and resources they need to get employed. The success comes from the rigor and discipline that the program mandates, but also from the compassion and community-building that the program teaches.

“This employment pipeline is our most successful, it’s something that we’re most proud of and it started with Groundwerx — it started here,” said Damrel. “There’s been so many benefits to it that we want it to keep going.”