The chaos inside a recent San Jose City Council meeting was like nothing seen before: Eight people chained themselves to chairs to protest the city selling public land to Google for a massive tech campus.

SWAT officers paced the room. Authorities blanketed the hallways all night, tense and ready for an uprising after monitoring social media posts from activist groups. After the protesters refused to leave, San Jose police officers used bolt cutters to break the chains. The eight protestors spent hours in jail and now face misdemeanor charges of disruption of public assembly.

But who is the group behind the turbulent protest that made national headlines? And do they believe their civil disobedience sent the right message? All eight protesters are linked to “Serve The People San José” – a fairly new group formed in June to oppose the Google deal.

Jocelin Hernandez, a key member of the group, was among seven others arrested for chaining themselves to chairs. Hernandez spent the night behind bars. It was one of the most frightening things she’s done, she said, but it was the only way to be heard. Hernandez has no regrets.

“I think we needed to show very loud and clear the corruption that was going on,” Hernandez said. “They were suppressing public participation. We chained ourselves to the chairs because we already knew if we said anything against this project we’d get kicked out.”

Hernandez said police officers were eyeing her all night. People were barred from bringing in backpacks. They needed passes to use the restroom. Several rows inside City Hall were taped off and some said they were told a parking lot was full – but it was not.

The fracas led to Mayor Sam Liccardo clearing the chambers and voting on the city’s most significant land sale without anyone in the room. The council unanimously approved selling nearly 11 acres of land for $110 million to Google to build a new downtown campus.

The mayor said Google’s approval process was the most transparent compared to other cities. Liccardo spokesman David Low added that the city hosted dozens of community meetings to solicit input and every one of the 200 attendees got a chance to speak. 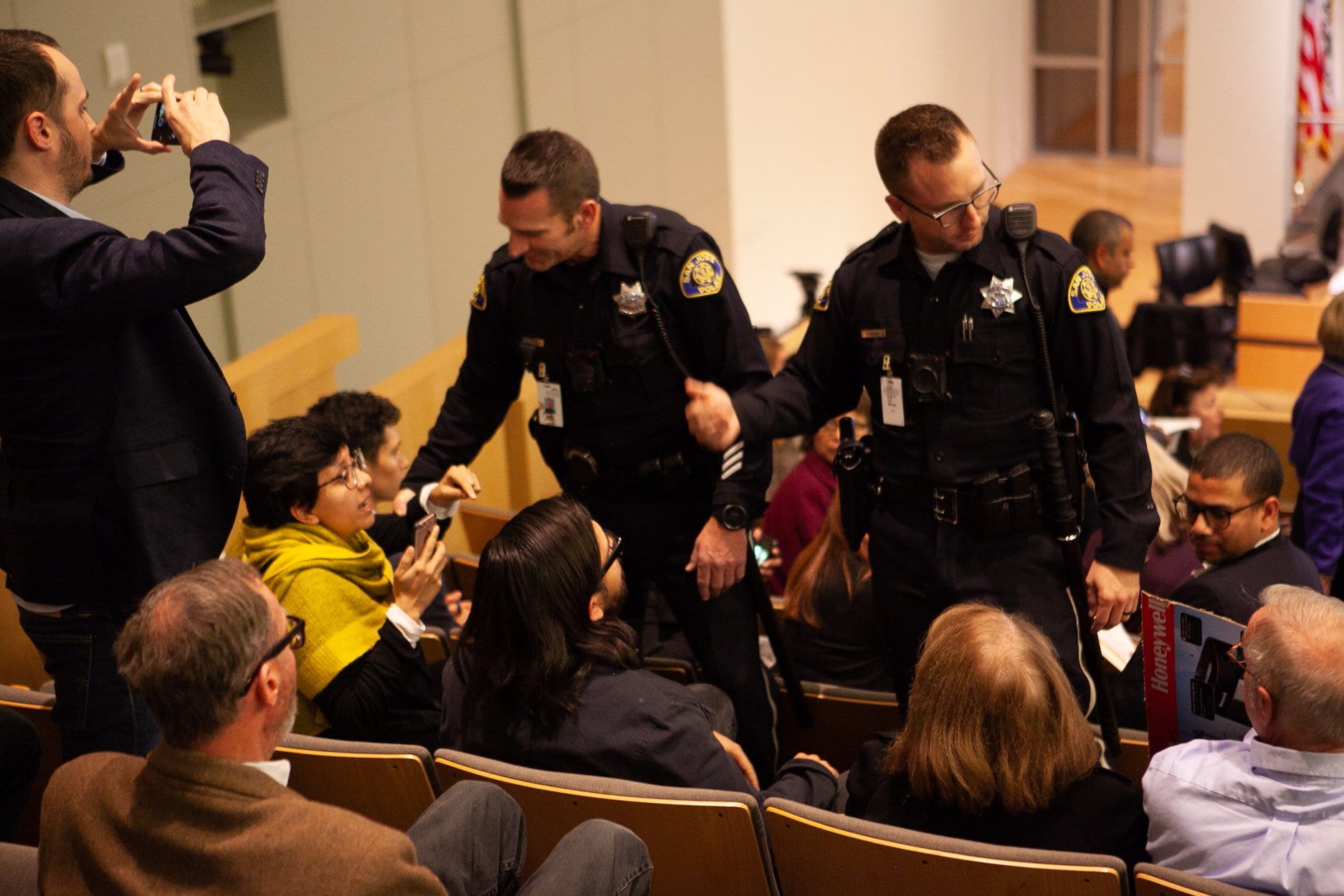 “Yet, after every attendee had been given their opportunity to speak, a number of protestors launched a sustained disruption in the Council Chambers – with some going as far as chaining themselves to their chairs as they heckled the Council – which made it impossible for the Council to continue its proceedings,” Low said, adding that SJPD “advised us to empty the chambers if we were to continue this important public meeting.”

San Jose police officer Gina Tepoorten, a spokeswoman for the department, said protesters were permitted to stay inside City Hall — just not inside the chambers — to continue their protest.

“For safety reasons, all individuals inside were asked to leave while the people chained to their chairs were taken into custody,” Tepoorten said.

Serve The People San José has a “couple dozen” members, Hernandez said, and it’s growing. The group – whose tactics are in the same vein as some East Bay protesters – also picketed in front of Liccardo’s downtown home before the big vote. The mayor politely waved and offered bagels and orange juice.

The protest erupted minutes after downtown Councilman Raul Peralez criticized nonprofits People Acting in Community Together (PACT) and Silicon Valley De-Bug for opposing the project without disclosing the groups had accepted Google donations.

Hernandez said her group planned to chain themselves to their seats anyway, but Peralez’s comments provided the “perfect opportunity” to jump into action. For those who say it’s too extreme, Hernandez says Serve The People San José is just getting started.

“It’s extreme that people have to resort to living in cars, having to live in RVs and on the streets,” Hernandez said. “It’s extreme that families have to commute more than three hours in the morning. It’s extreme how in all this wealth, they talk about trickle-down economics, but we never get anything — not a drop.”