It’s been almost 20 years since Laura Wilcox, a 19-year-old volunteer at a mental health clinic in Northern California, was shot and killed by a mentally ill man who refused treatment.

The law, which allows a court to compel services to a mentally unstable person or a person who refuses treatment, only applies to a specific group of people who have formerly been hospitalized or incarcerated as a result of their mental illness. These individuals must meet specific requirements that include recent hospitalizations within the last 36 months, demonstrated violent behavior towards themselves or others, repeatedly refused treatment, or is in a “substantially deteriorating” state. Concerned family members and caregivers can also request that an individual be referred to an assisted outpatient treatment program.

Since its inception, the law has been implemented in only 20 out of 58 counties, but the process to adopt the law has been slow due to a lack of funding and the legislation’s contentious nature. Santa Clara County is one of a handful of large California counties without the law — neighboring counties such as Alameda and Contra Costa have implemented the law, as have Southern California counties such as Los Angeles, Orange and San Diego counties. 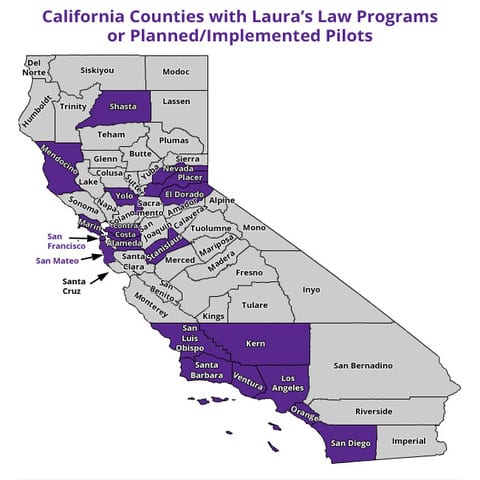 Mental health advocates and government officials are split on the law’s effectiveness — supporters say that the law creates the necessary pathways to get people treated, while opponents argue that it infringes on people’s civil liberties without addressing bigger problems, such as the housing crisis and a lack of accessible resources.

But in a county that lacks widespread mental health services and closed its only psychiatric hospital, some lawmakers say it’s Laura’s Law or nothing — and people need help now.

“We hear the same stories all of the time. People need access to the system and getting help sooner rather than later, and there should be more ways that people can enter the system,” said Councilmember Johnny Khamis, who’s advocated for the measure since San Jose Police Officer Michael Johnson was killed in 2015 by a suicidal man with a gun. “There’s always room for improvement.”

According to Khamis, the neighboring counties that have implemented the law have seen positive results.

“Every county where it is being used, it’s had a good effect. If you look at San Francisco, they use it sparingly with people who have run in with the law multiple times. They’re saving a lot of money — more than $100,000 a month on about 100 or so people.”

A new report on the program in San Francisco shows that the city and county saved more than $400,000 a month in city services — an 83 percent decrease — and at least 66 percent of the participants voluntarily stayed in treatment programs. About 54 percent of the participants achieved “positive status outcomes” through successful treatment and discharge, the report said. So far, there have been 129 participants in the program since it launched in Nov. 2015.

“It’s been tried, tested, and it’s been working, so why wouldn’t we want to use something that’s working?” added Khamis. “If we’re going to get serious about helping the homeless, this will help take care of a small section– one that’s the hardest to take care of. I don’t know why we wouldn’t look at every tool possible.”

While the National Alliance on Mental Health — or NAMI — has not taken a position on the controversial law, local leaders say it could be a promising way to get severely mentally ill people off the streets and into treatment programs.

“From what we hear, it is very cost-effective and more importantly it engages people in treatment,” said Kathy Forward executive director of Santa Clara County’s NAMI. “It’s not punitive at all — it’s a very engaging process. (It helps people) so that they don’t have to keep going in and out of jails and hospitals. It’s not about forced medication, but it’s about engaging the person to be involved in their life and getting help.”

Simitian said he was in the state Legislature when the law passed and initially supported it because it allowed local counties to exercise their own judgement and didn’t force required medication.

But now Simitian said the law only helps a relatively small number of people and he’s concerned about  “civil liberties and due process issues.”

If not Laura’s Law, then what else?

Since Santa Clara County is hesitant to pilot the law, Simitian and other lawmakers have focused their efforts on rolling out new mental health services and initiatives, though those initiatives are competing for public dollars from housing, homelessness and other social services the county provides.

Simitian added that the county is securing beds for youth who are experiencing psychiatric crisis with plans to construct a Child and Adolescent Acute Inpatient Psychiatric Facility at the Santa Clara Valley Medical Center in San Jose. Both plans aim to provide better access to care and services, he added.

“My goal is getting people the help they need where they need it,” said Simitian.

As for Laura’s Law, he thinks it’s “too soon to tell” whether it should be implemented in Santa Clara County.

“I’m keeping an open mind, but it would be a mistake to focus on Laura’s Law,” Simitian said. “I worry that people think it’s the easy answer or a quick fix — it is neither of those. It is one possible tool.”

Allison Brunner, CEO of the Law Foundation of Silicon Valley, said misconceptions about the law continue to confuse people.

“What people think it means is that it is a mandate for automatic hospitalization for noncompliance for treatment,” said Brunner. “But this is really important — it does not mandate that a person take psychiatric medication.”

According to Brunner, the court-mandated order doesn’t mean the person will automatically be hospitalized. It simply means they can be assessed for a 72-hour hold if they violate the order. Police already put severely mentally ill residents on 72-hour holds, Brunner said, and it’s not working to address the needs of people suffering from mental illness.

Brunner believes there are better solutions to providing care. She said mentally ill residents can be engaged through voluntary programs, by providing affordable housing and relying on mobile crisis teams — rather than law enforcement.

“Treatment is always going to be more effective when it’s voluntary and done on a voluntary basis,” added Brunner. “We need creative solutions — a whole-person approach to care that addresses all needs and solves more problems than just the behavioral.”

Khamis disagreed. Even though mentally ill residents have rights, Khamis said, “they’re not able to help themselves.”

“What’s more humane — putting them in a place where they’re going to be safe, or letting them stay on the streets?” he added. “Their lives are at stake — and we’re afraid to do anything about it.”