A surge in investment activity between July and September brought year-to-date aggregate commercial real estate sales in the South Bay to $6.3 billion.  That’s the highest sales volume for the region since 2015, according to a new report from Joint Venture Silicon Valley’s Institute for Regional Studies.

The uptick is mainly driven by institutional investors looking for safe havens to place their dollars, said the report’s author, Ricky Manago.

“If you’re managing millions of dollars of funds in a pandemic, you want to put those funds into something that’s really reliable,” he told San José Spotlight. “What better asset to invest in than a piece of real estate that is fully leased by, say, Verizon, which leased last year with Coleman Highline?”

Manago said it’s a no-brainer to invest in commercial properties leased by tech companies because there is almost zero risk they will default on rent payments.

“In contrast, if you look at investing in multi-tenant buildings in San Francisco’s community benefit district, that’s so much riskier,” he said, noting these types of properties have higher tenant turnover and renters who may fail to pay.

“You look at the leases in Silicon Valley in a week, it’s what most cities hope to do in a year,” he said.

The Silicon Valley region continues to have the lowest vacancy rates for commercial real estate of any major market in the country, according to the report. The average vacancy rate for office buildings grew last quarter to about 13.3% which is up from 10.7% in the third quarter of 2020.

Manago said a handful of companies may have contributed to the small uptick in office vacancy rates last quarter, observing that NetApp moved out of its roughly 700,000 square-foot Sunnyvale campus. He noted the return of office workers looked promising this summer until the Delta variant appeared, prompting companies to extend work-from-home policies. 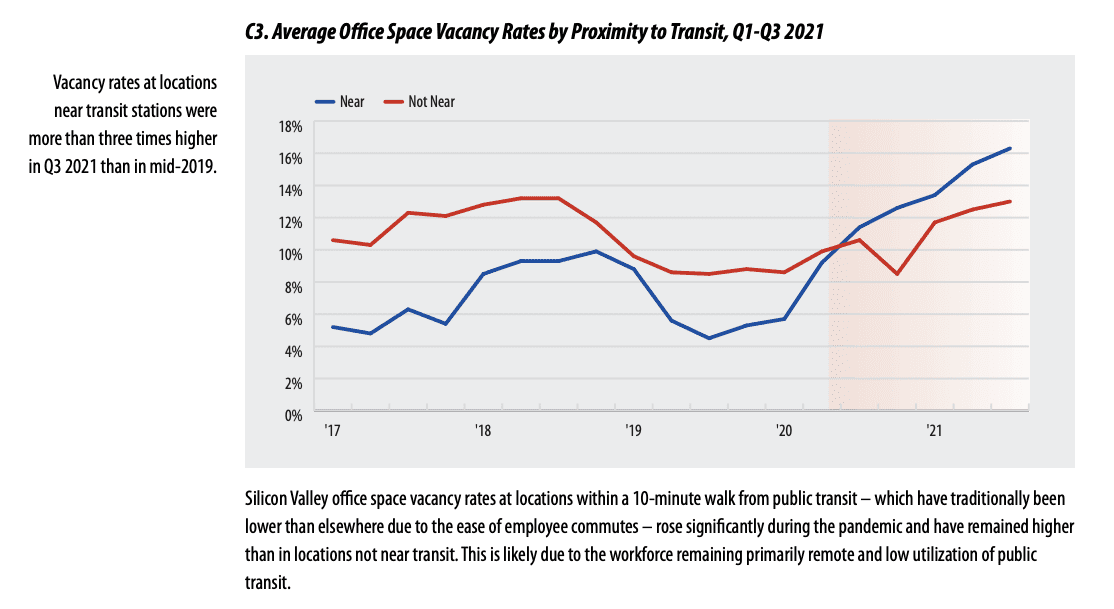 Derrick Seaver, president of the San Jose Chamber of Commerce, said telecommuting has continued to have a significant ripple effect on small businesses in the region.

“As folks are working from home, that requires a lot less of things like dry cleaning, or it changes their daily commute structure like where they pick up their donut and coffee on the way to work,” Seaver said.

Seaver’s organization is taking a multi-pronged approach to help businesses still struggling to recover from the pandemic. He said one major focus is looking for strategies to bring workers back to offices—a challenge that preceded the pandemic.

“Our policy committees are going to continue to look at that,” he said.

Ritchie anticipates most companies will eventually bring employees back to the office. He said the real victims of the pandemic in the commercial real estate world are older professional service firms and non-tech companies, who are already impacted by tech companies.

“It’s been brutal,” he said. “It’s that sector of the economy that’s being disrupted out of business by the giant tech companies who are everything.”

San José Spotlight is participating in NewsMatch for our third straight year. Make a tax-deductible donation through Dec. 31 and your donation will be matched dollar for dollar by NewsMatch sponsors.

Plus, if you become a recurring donor with $10/month or $120/year, you will get an exclusive t-shirt.

Give now. Give nonprofit.