HousingReal Estate
by Sonya Herrera
About 1,300 building permits are expected to be issued in San Jose this year, a sharp decline from previous years. . Photo by Carly Wipf.

San Jose has issued far fewer residential building permits this year — and it could signal a severe economic downturn.

“It looks like a slowdown is coming,” said Will Smith, business agent for the IBEW 332 electricians union. “We’re potentially heading into a recession.”

Smith’s observation is backed up by the latest numbers released by San Jose’s Housing Catalyst team, part of the city’s Economic Development department. According to the city, San Jose has issued 994 building permits for new residential units so far this year, less than half of last year’s.

“If Quarter 4 tracks similarly to the previous quarters… roughly 1,300 new building permits would be issued in total for 2020,” according to the city’s latest Housing Crisis Workplan Update. “This is a significant drop from the previous years.”

According to data from previous years, the number of residential building permits have been trending downward since 2017, when 3,097 permits were issued. The city issued building permits for 2,973 units in 2018 and 2,382 permits in 2019. 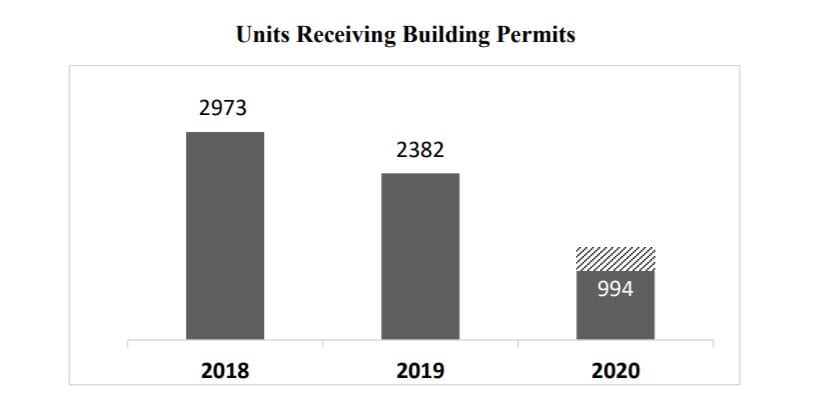 “We’re in an unprecedented moment,” Reed said. “It’s really hard to know what next month looks like, let alone 12 months or 18 months.”

Reed said he and his fellow housing advocates are optimistic the demand for housing in San Jose will remain high.

“Going forward, San Jose is a place that’s moving, and people are going to be looking for housing opportunities,” Reed said. “I haven’t heard anybody say, ‘This is a crisis, we’re not gonna get out of it.’”

David Bini, executive director of the Building & Construction Trades Council for Santa Clara and San Benito counties, said the demand for construction labor is cyclical and typically mirrors the overall economy. Bini said the 20-plus unions represented by the council haven’t reported any major project cancellations.

“There is a lot of work that is scheduled to continue, especially work in a lot of different capital improvement programs in cities,” Bini said, adding construction workers in the Bay Area are fortunate to live in a region with such a high demand for housing.

Rich Truempler, a senior vice president at CORE Companies, said the main obstacle to residential building this year is the fact that rents have fallen while the cost of construction remains high. For example, his company’s only upcoming project in San Jose will be a 569-unit mixed-affordability building. Construction on the project is slated to begin in 2022.

“We have not realized any savings in costs,” Truempler said. “That makes projects very tough to finance right now.”

Meanwhile, the number of permits issued for affordable housing in 2020 has also nearly tripled since last year, with 369 permits issued between January and September.

“The last recession, there was a pause in residential building, and then jobs came back and put acute pressure on Silicon Valley and housing,” Truempler said, adding that flexible land-use policies and reducing the cost of building could help the city recover from the current building slump.

Smith said IBEW 332, which represents about 3,700 local electricians, regularly monitors upcoming projects to estimate the likely workload and determine how many new apprentices to hire for the following year.

He said all of the union’s larger projects are ending next year, and there are no large projects starting after those are completed.

“We do see some projects in the pipeline, but they’re smaller projects,” Smith said, adding that while his guess was speculative, the pace of available jobs for electricians has severely declined and marks a clear trend.

“Unless things change,” Smith said, “it looks as though 2021 is going to be the start of the downturn.”